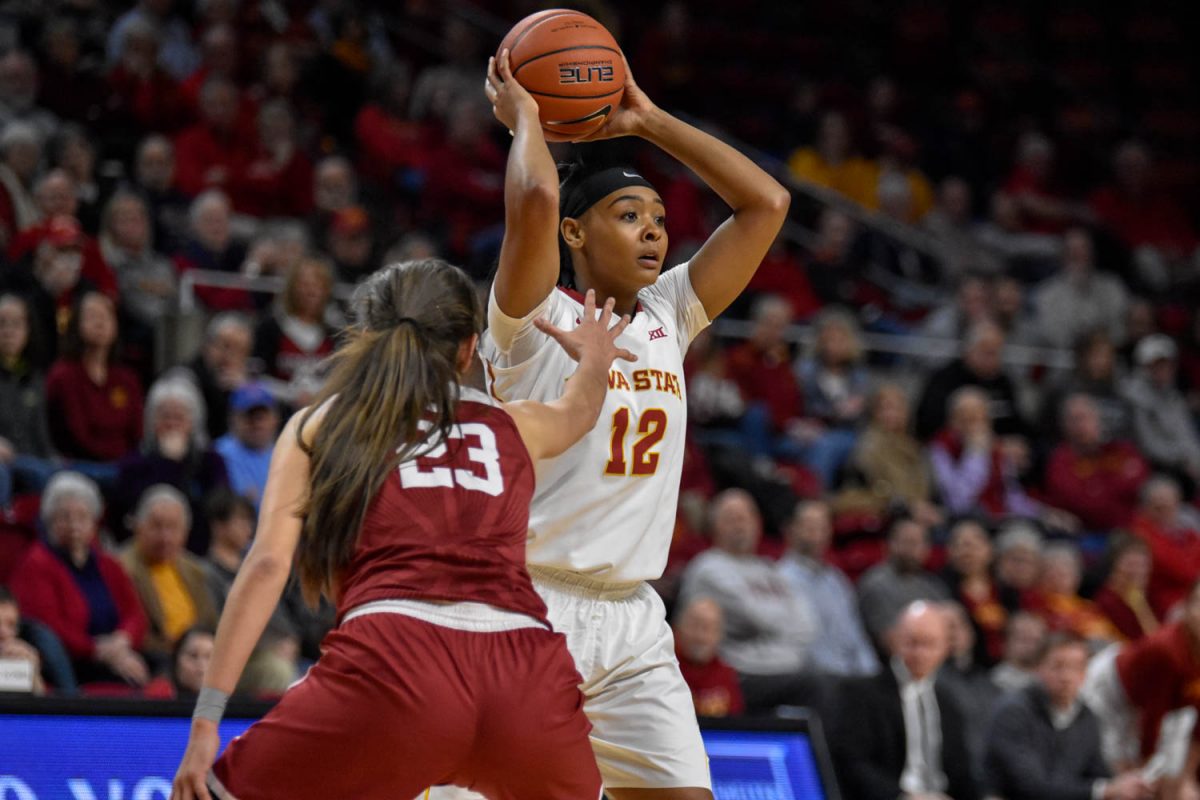 Senior guard Seanna Johnson looks for a teammate to pass to at the Oklahoma game, Wednesday, Jan. 11, 2017, at Hilton Coliseum in Ames. Photo by: Lani Tons

The Iowa State women’s basketball team has won four straight games and is coming off of what was without question its biggest win of the season on Friday at No. 6 Texas.

Any chance of a hangover tonight when Oklahoma State comes to town (7 p.m.)?

“No, at this time of the year, if there such a thing, you don’t belong playing,” Bill Fennelly said about the matchup. “You get to the end of the season and you need to, obviously, understand what got you where you are and got to keep moving forward. With only regular season game to go, it’s Senior Night. I don’t think there will be anything like that.”

Fennelly believes his team is playing its best basketball of the year currently. He also thinks the same thing about Oklahoma State.

The Cowgirls have won two straight, including a big win against West Virginia on Saturday.

“Besides orange and black, Kaylee Jensen’s favorite colors must be cardinal and gold,” Fennelly said on Oklahoma State’s best player.

Jensen always produces quality statistics against the Cyclones. Earlier this season, she had 28 points and 11 rebounds in Oklahoma State’s 71-59 win over Iowa State. Then going back to last season, Jensen averaged 18.5 points and 12 rebounds against the cardinal and gold.

“The big thing is, you aren’t going to stop (Jensen) from scoring,” Fennelly said. “You hope it’s just not 28.”

While the Cyclones will prepare to contain Jensen as much as possible, they won’t look at the game film from this season’s first meeting because it was so long ago (Iowa State’s Big 12 opener). Fennelly is more focused on making sure the Cyclones keep playing they way they have been over the last two weeks.

“We have to play every game like it matters,” said ISU guard, Bridget Carleton. “We have to play hard. We know they are ready to play and they are going to be ready. Especially, playing our last game at Hilton, we know we have to play well, especially for the seniors.”