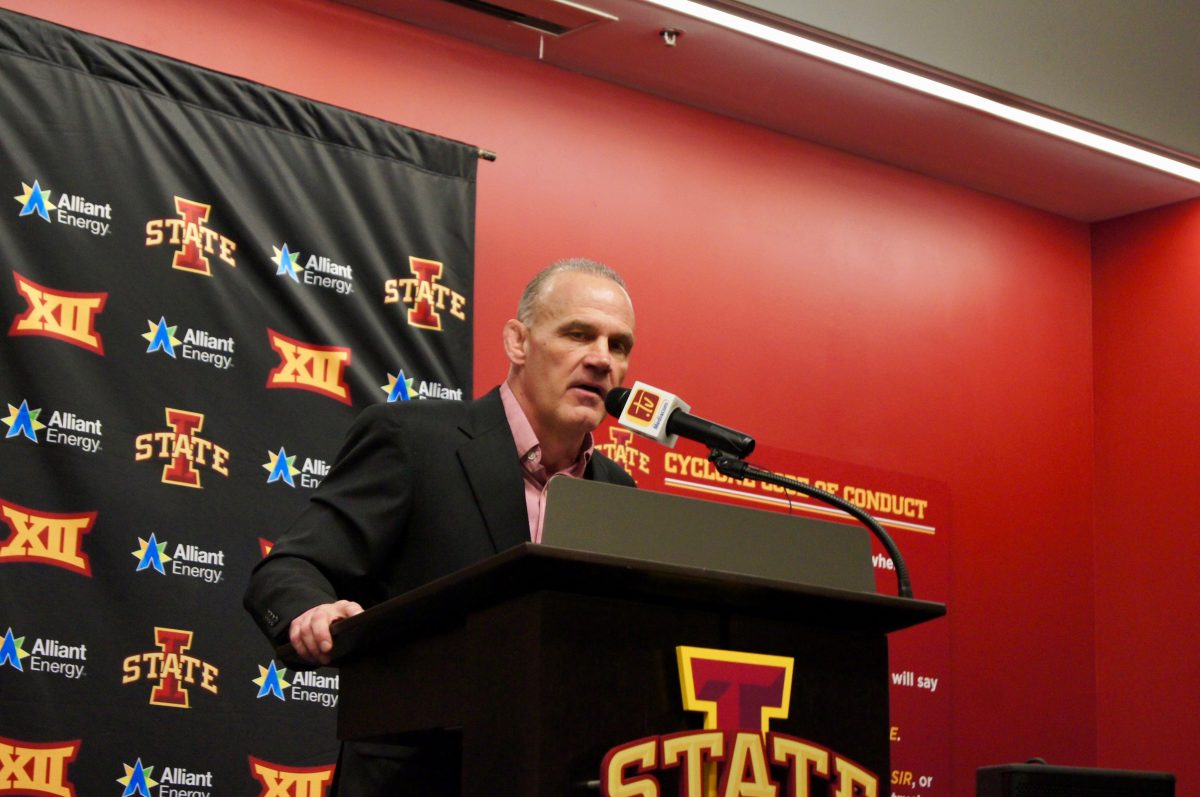 AMES — Dad parked the car on the outskirts of Hilton Coliseum’s lots.

His son bundled up, bracing for the long, cold, blustery march to the double doors that opened into a wrestling Mecca.

“I was surprised how far we had to walk just to get to a wrestling match and then going in there and watching guys like Chris Taylor wrestle and some of those guys,” Dresser said during Wednesday’s introductory news conference. “Dale Barr wrestling, so I’m dating myself and going way back.”

Please do. Dresser — who won an individual NCAA title under former Cyclone great Dan Gable at Iowa in 1986 — plans to make the phrase “glory days” into something concrete and thrilling to look forward to, not merely reminisce about.

The Humboldt native and 2016 NWCA Coach of the Year said the Cyclones’ program boasts “top-three” facilities and he vowed to immediately help enlist funding and support to establish a “Cyclone Regional Training Center” for post-graduates with Olympic and World Championship aspirations.

Ambitious? Indeed. Realistic? That, too.

“We want to be a one-step shop in terms of wrestling,” said Dresser, who guided fourth-ranked Virginia Tech to four straight top-10 finishes at the NCAA Championships before officially deciding Sunday to return to his home state. “We want guys, we want the best. We’re not only going to recruit the best wrestlers in the nation. We want to recruit some of the best post-graduates in the nation, who make Ames, Iowa, their home to train. So when they go to the World Championships, when they go to international events, they can have that Cyclone stamp on them somewhere. I think it’s great advertising.”

But Dresser’s approach won’t be based on smoke and mirrors — and he’s approaching this rebuilding project with no illusions.

The Cyclones finished 1-12 in dual meets this season. Head coach Kevin Jackson, who Dresser said he “thinks the world of,” will continue to lead ISU at the Big 12 Championships and the NCAAs before stepping down.

Dresser plans to meet with current wrestlers as well as reach out to members of an elite recruiting class that signed National Letters of Intent before there was any hint of a coaching change.

The obvious goal: Retain as many of those seven wrestlers as possible, and it’s so far, so good, on that front.

“Five are rock-solid Cyclones, I think,” Dresser said. “One’s probably on the fence and I’m going to go try to push him off the fence in a couple days. And then there’s one more that we’re probably not going to have. … So that’s pretty good, five/six out of seven.”

Dresser aims much higher than “pretty good,” though, and it’s an attitude he’s been honing since first falling in love with the sport at an early age.

That’s when Joe Fitch started a kids’ wrestling program for Humboldt area youths. Dresser and his brother, Dan — one year and 10 days his junior — competed in a city tournament. Both won gold.

“It was something like, ‘Wow, this is cool,’” said Dan Dresser, who is a volunteer assistant coach at Ankeny High School. “I remember I was a kindergartner, and he was in first grade, so that was our first introduction to wrestling.”

The Dresser boys were hooked. Quickly, scraps ensued in the family’s home.

“I was probably more the instigator of any fighting versus Kevin because he was probably the one that was kicking my tail,” recalled Dan, a two-time All-American at Buena Vista under legendary coach Al Baxter. “So I was the one that wanted to take it to a different level.”

That meant descending a level. As in the basement. They set up a makeshift mat to accommodate their aggression. Thin, wood-paneled walls became its collateral damage.

“It got to the point where we were wrestling and we started getting some feet that got put through the paneling walls,” Dan Dresser said. “At that point, I think mom and dad looked at it and said there’s really no reason to fix this right now, because it’s just going to happen again. So we would kind of tear up the basement walls a little bit. It wasn’t obviously set up to be a wrestling room.”

Walls couldn’t contain their enthusiasm. Soon it spilled over into high school, where Kevin won a pair of state titles. Then college, where the elder Dresser brother attained All-American status twice (one title) and his Hawkeyes teams won Nationals during all five years he was on the roster.

A few years later, Kevin Dresser headed to Virginia and took his first high school wrestling coaching job. In 18 seasons at Grundy High School and Christiansburg High School, he mentored 69 state champions and learned that he was only as good as the people he surrounded himself with.

It’s an approach he took to Virginia Tech and now, Ames.

“If that’s CEO-ish, that’s probably what it is,” Dresser said. “But when I was a young coach, I know I tried to do everything myself. Everything. Now as I got older I’ve realized the importance of hiring good people and people that are better than you in some areas. So the people that I’m going to hire for the jobs that I need are going to be better than me, I can tell you that. I think that’s been something I learned somewhere along the way that’s important.”

What else has he learned? Lots of things. One entails the importance of taking playful swipes at his alma matter and its coaches, Tom and Terry Brands, whom he “respects the heck out of.”

Dresser famously went “crazy” on the Brands brothers last February, charging they had avoided a possible matchup with the Hokies in the National Duals.

Wednesday he further stoked the ISU-Iowa rivalry from the podium.

“It’s OK to say we want to beat Iowa, isn’t it?” Dresser said. “I think there’s nothing wrong with that, for two reasons: one, it’s fun, right? It’s a lot of fun. And two, it’s a benchmark. Let’s face it, Iowa’s pretty darn good and I don’t see them getting any worse. So if we’re competing at that level, then we’re in the hunt.”

Dresser’s no-nonsenese demeanor is one reason he became ISU’s Athletics Director Jamie Pollard‘s top target to replace Jackson. Pollard polled several people around him about qualities they wanted in a new head wrestling coach. All pointed to Dresser.

“The overriding consensus was we need a CEO of wrestling,” Pollard said. “We need somebody that’s done it, who’s been there, who can restore this program back to its rightful place in the history of college wrestling — and challenged me as AD, to say, you owe it to this athletics department and to this program to go after the absolute best if you can get him.”

Pollard indeed got his man. But Dresser implored fans and boosters to be patient in terms of an impending ISU turnaround.

“To keep a team in the top five is incredibly hard,” Dresser said. “Incredibly hard — and that’s what we’ve got to get to. That’s exciting now and that’s the challenge I’m looking for.”

It’s a challenge sparked by a first-grade city championship, two Iowa High School titles, and one gold at the NCAA Championships. It’s one borne from those basement-based dust-ups with his brother Dan and the long, frigid walks to Hilton. Obviously, that walk will be much shorter now, unlike the path back to prominence.

“Division I wrestling is different game than it was 12 and 13 years ago,” Dresser said. “The advent of the regional training centers, potentially makes (the gap between) the haves and the have-nots bigger. So we have to understand the culture and we have to understand that we’ve got to put systems in place that allow us to compete with the Penn States, the Iowas, the Oklahoma States of the world. That’s going to take a little time.”

Iowa State’s AD gave a prominent ‘thank you’ to the outgoing wrestling coach. Jackson, a two-time World Champion and Olympic gold medalist, has guided the Cyclones for eight seasons — and did so with class the entire way.

“What Kevin Jackson did for us was pour his heart and soul into this program,” Pollard said. “And in the end, yes, he didn’t win enough matches, but that doesn’t change the fact that Kevin Jackson is a Gold medal winner, is (honored) in the rafters at Hilton and he was the captain of our 1987 national championship team; that he’s a great coach, a great wrestler, and more importantly, a great person.”