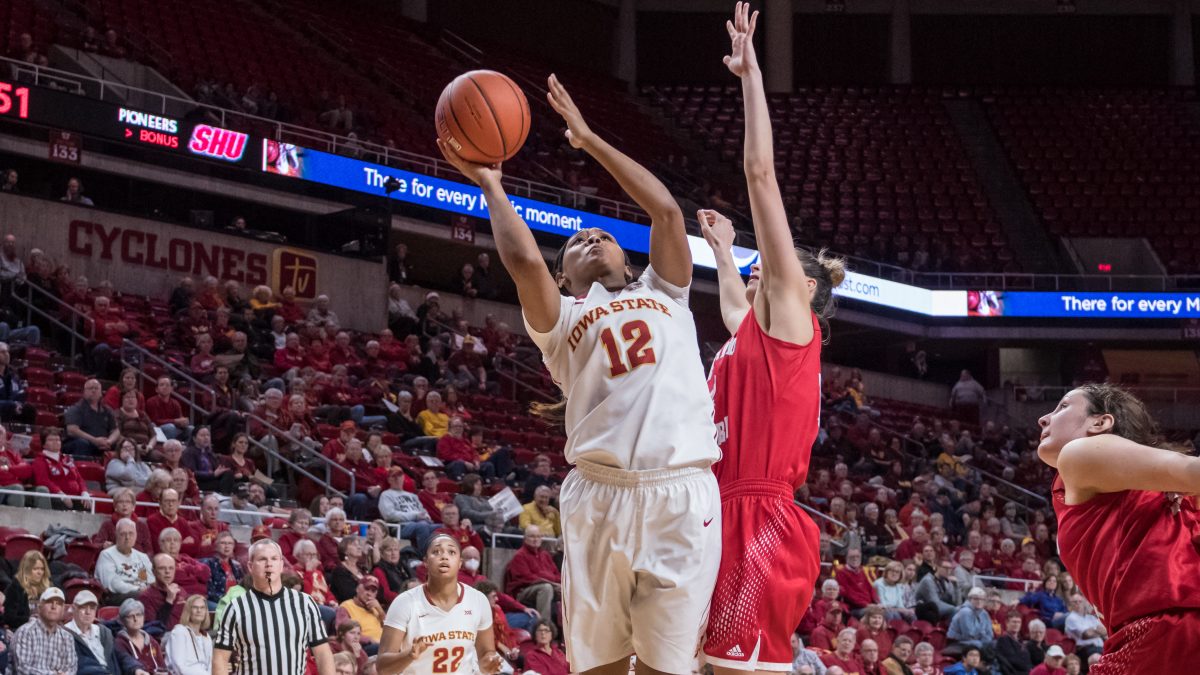 One, of utmost endearment. The other, downright unsightly.

“The first (half) looked like my wife (Deb),” said ISU’s women’s basketball coach, whose team beat Sacred Heart 76-56 Wednesday at Hilton Coliseum. “The second half looked like my sweater.”

You can always count on a good quip from Fennelly, who donned an “ugly” Mickey Mouse/Santa-themed sweater for this lopsided matchup that proved festive in the first-half and shaky in the second.

But the final 20 minutes were something else. Not so much ugly as unfocused.

The Pioneers (3-8) forged a 15-2 run to start the third quarter and forced 11 of ISU’s uncharacteristically-high 17 turnovers while proving scrappy everywhere but on the boards.

“We talked about staying focused until 8:30 (or) nine o’clock,” Fennelly said. “I think we might have left at halftime, but proud of our team. It’s been a good fall. It’s been a really good fall.”

Next up: Christmas with families, but thoughts of the Dec. 29 Big 12 opener at Oklahoma State will lead to visions of game tape, not sugar plumbs, as the team takes a short break.

“I don’t think you ever turn that off,” Fennelly said. “I think when we drive to Davenport to see my parents, I’ll have my laptop and we’ll be working. That’s what we do. It’s family time, but Iowa State women’s basketball is the family business and the family business never goes away.”

So expect gifts to be exchanged, while strategies are devised with a cup of egg nog in hand.

“The things that we have to clean up are still there, not just in the second half of today’s game,” Fennelly said. “Guard the ball better. Score on the block better. All those kinds of things. Not maybe as worried about it as I probably will be when I start looking at Oklahoma State tape, probably.”

“For us, rebounding was really key and we had three people with double-digit rebounds, so I think going into the Big 12 — they’re a lot bigger, so I think rebounding will be very, very key for us,” Johnson said.

So will taking care of the basketball.

ISU entered the game averaging 12 turnovers a game. Wednesday’s total of 17 — especially the 11 in the second half — will also be a focal point as Holiday events wind down and the trip to Stillwater looms.

“I think the lack of, whatever, focus — whatever term you want to use really showed up,” Fennelly said. “We missed eight free throws and we’ve been a good free throw shooting team. For the most part we’ve taken care of the ball. We made some very lackadaisical, silly turnovers and you just can’t do that, especially live ball ones that turn into points. That’s one of the few games — we played a great Mississippi State team and we only 13, 14 turnovers (before) overtime. And we didn’t get pressed one second today and turned the ball over 17 times. So that’s a sign of maybe not quite being as locked into the things we needed to be, so that will be probably the number one thing that gets circled on the stat sheet that goes on the wall.”

Johnson — in her 100th career start — posted her 30th career double-double, which tied her for third all-time at ISU with Stephannie Smith. … Bowe recorded her first career double-digit rebounding game. … Buckley scored in double figures for the 51st time in her career and notched five or more assists for the 42nd time as a Cyclone.