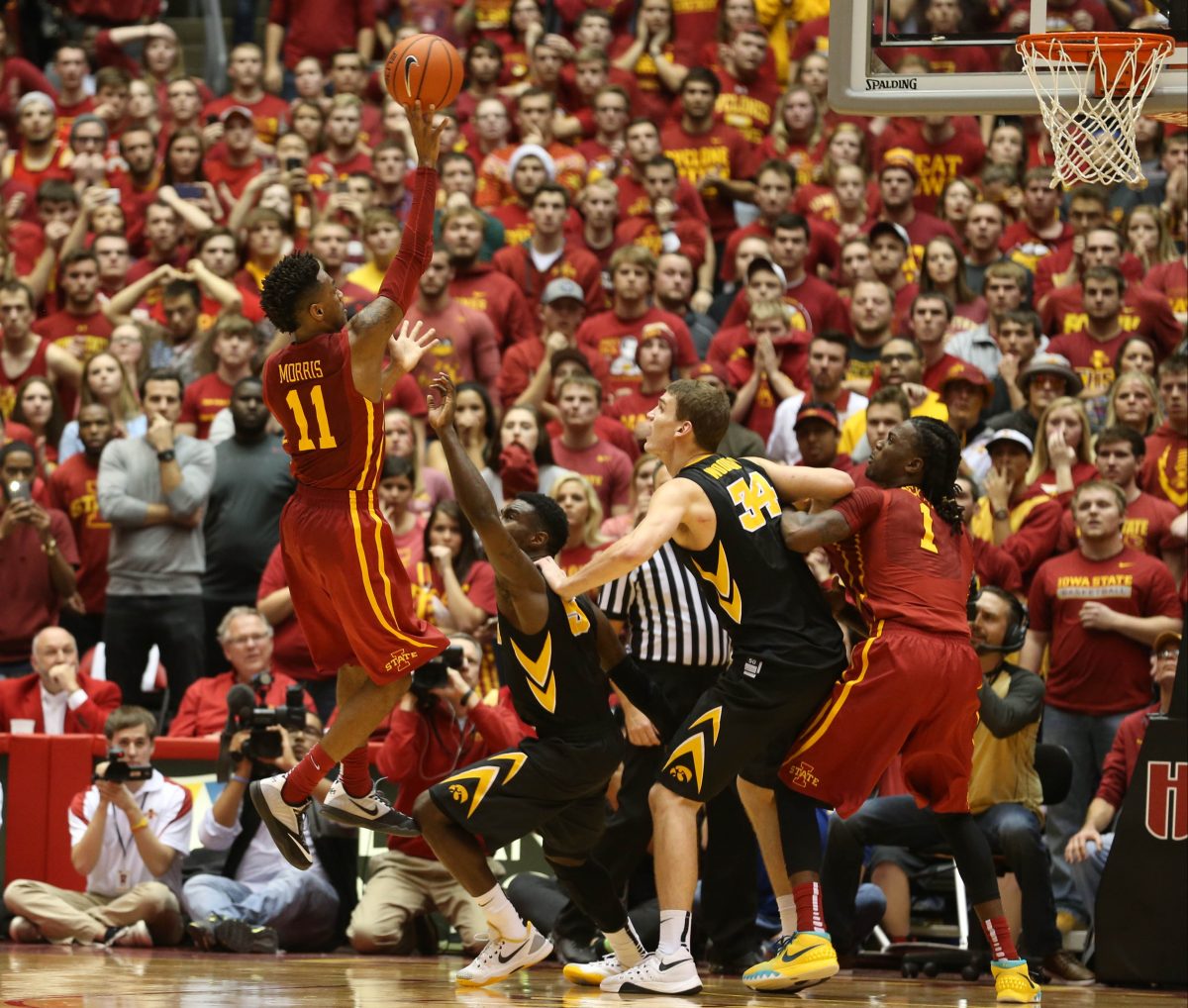 The comeback: From 20 points in arrears.

“Last year was a crazy game,” said No. 25 ISU’s floor general, who hopes to rekindle that kind of magic Thursday at 7 p.m. (ESPN2), but this time on enemy soil. “Uthoff probably put on one of the best performances that I’ve seen playing against anybody in my 21 years of playing basketball. He put on a show and Matt (Thomas) took on the load of guarding him and getting things rolling. Put us in a good opportunity to hit the game-winning shot. I don’t know who made that shot but it was a good play.”

Suuuuuure he doesn’t know who made that shot. Morris grinned as he said that.

Still, this Cy-Hawk clash will unfold without the Cyclones’ leading trash talker.

Georges Niang, of course, is now property of the Indiana Pacers (and on assignment with the NBA D-League’s Fort Wayne Mad Ants), but the legacy of his coffee-sipping, kiss-blowing anti-Iowa antics lives on.

“Georges texted me (Monday) night, ‘Stay in Iowa City if you don’t win on Thursday,’” ISU coach Steve Prohm said. “Because I’d texted Georges and said, ‘Were you guarding Klay Thompson (Monday) night?’” And he responded with that.”

Forget the scoreboard comparisons. Yes, Iowa’s 4-5, but its slate has included No. 14 Virginia, 23rd-ranked Notre Dame, Seton Hall and Memphis. Yes, the Hawkeyes lost to Omaha at home — a team the Cyclones beat by 44 points on Monday night. Still, expect weirdness of varying degrees on Thursday even though ISU (7-2) will be favored to extend its winning streak in the series to four.

It’s what the rivalry is all about.

“People are saying, ‘Oh they lost to Nebraska-Omaha,’ but that doesn’t matter,” said fifth-year senior guard Naz Mitrou-Long, who’s hit his share of game-winning shots. “When it’s a rivalry game anything could happen. Uthoff going off for 30 in the first half and then having two in the second half — highest of highs, lowest of lows in one game. Anything can happen.”

Just ask back-up point guard Donovan Jackson. He was still playing for Iowa Western last season, but found a TV to tune in the game amid tournament play in Missouri.

“I was in a hotel with my teammates,” said Jackson, who’s flashed quickness, stern defense and strong shooting skills in nine games as a Cyclone. “We were watching the game and we got there around the second half. I was just going crazy. I saw all the good stuff. I’m like, ‘Man, I just can’t wait to be a part of that,’ and now I am. We’re going to make it real.”

This time around, ISU’s vastly-improved defense needs to clamp down on Hawkeye sharpshooter Peter Jok, who’s averaging 24 points per game.

Mitrou-Long will guard him some. So will Nick Weiler-Babb off the bench. Thomas — who shadowed Uthoff in the second half of last year’s win — likely draws some Jok duty, as well.

So who makes history in this rendition of it? That’s anyone’s guess. Morris is prepared. Niang will be watching.

“He FaceTimed me and said, ‘I know you’re ready for this week,’” Morris said. “I’ve just got to carry the trash-talking load.”

And maybe another teardrop — or something else for the Iowa faithful to remember him by.

“I’ve got a surprise up my sleeve,” Morris joked. “You’ll see. It’s better than a kiss.”