The Cardinal and Gold won six of the four matchups on the day. A trio of Cyclones recorded their first career dual wins in redshirt freshmen Chase Straw, Colston DiBlasi and Joe Teague.

At the intermission, the Cyclones trailed the Bears, 10-9. Iowa State won three of the five bouts, while Northern Colorado took one by forfeit and one by decision.

Redshirt freshman Joe Teague put the Cyclones on the board early. He posted a 3-2 decision over UNC’s Jamarcus Grant. Teague was a monster on top, racking up 1:30 in riding time, which proved to be the difference in this match.

Redshirt senior Quean Smith made his 2016-17 debut in Greeley. Smith toppled UNC’s Jack Kuck by 4-1 decision. The Detroit Mich., native posted an escape, a takedown and 2:04 in riding time.

At 133, redshirt senior, No. 4 Earl Hall picked up career win No. 85 with a 7-0 decision over the Bears’ Rico Montoya. It took a little while for Hall to bust open his offense, but once he did, it was effective. Hall rode for the entire second period and picked up a late takedown and four-point near-fall in the third to solidify a victory.

Following the intermission, Straw got the Cyclones back on the right track. In his first dual win as a Cyclone, he defeated Ben Polkowske with three takedowns, a reversal and 1:09 in riding-time.

DiBlasi padded the Cyclone lead when he scrapped to a 5-3 decision over Keilan Torres. He picked up two reversals in the second period to propel him. He also added 1:02 in riding time.

To cement the Cardinal and Gold victory, redshirt senior, No. 10 Lelund Weatherspoon put up a flurry of points to win by 15-2 major-decision against Dalton Robertson. Weatherspoon jumped out to a quick 8-1 lead in the first. He tacked on a four-point near-fall in the second, a reversal in the third and garnered 2:22 in riding time.

Match of the Night: 197-pounds
Joe Teague came up big for the Cyclones in this match. Late in the third, he held a 1-0 advantage, but was reversed late in the period. He was able to get to his feet with five seconds on the clock. His 1:30 of riding time lifted him to a 3-2 victory.

Iowa State is back tomorrow for a dual against Wyoming. The Cyclones are set to take on the Cowboys in Laramie, Wyo., at 3 p.m. CT Sunday afternoon. 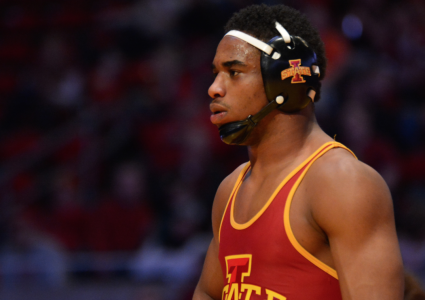 WRESTLING: ISU moves to 0-2 via loss in Fargo 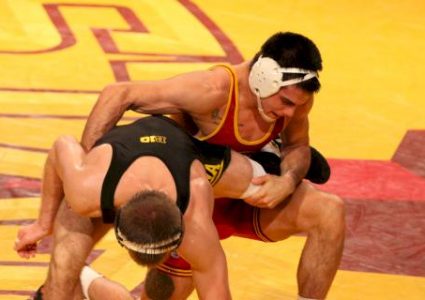