If a team wins three quarters and ties the other one, it will more than likely win the game. It’s simple mathematics. That’s exactly what the Iowa State women’s basketball team did during its 76-68 victory over in-state rival, the UNI Panthers. However, the Cyclones didn’t win three 10 minute sessions and tie another one with flash.

They did it with grit.

Iowa State came out of halftime with a 34-30 lead over UNI. Within the first minute of the half, Bridget Carleton hit a 3-pointer to give the Cyclones a seven point lead. But the Panthers would not go away.

UNI kept clawing its way back into the contest. The Panthers got within four, then two and then the Cyclones’ lead faded as their opponent tied the game at 43 points a piece.

“It was one of those games, if you look at the stat sheet, we probably led for 90-percent of the game,” ISU head coach Bill Fennelly said. “Every time we made a defensive mistake, they made a three or we didn’t get a defensive rebound, they got an and one.”

Momentum was on UNI’s side for the first 7-plus minutes of the third quarter but at the 2:19 mark, the momentum shifted. That’s when Jadda Buckley converted both free throws to give Iowa State a 47-45 lead.

Iowa State finished the third quarter on a 9-2 run to go into the fourth with a 54-47 lead. During the last 10 minutes of the contest, Iowa State made sure the pesky Panthers wouldn’t get within two points or even tie the game.

The score doesn’t directly indicate it but neither team totally got going offensively. Both teams shot poorly from the floor – ISU at 41.1 percent and UNI at 39.3.

During the Cyclone pregame show, Fennelly stated that he would need his best players to play well in order for Iowa State to win.

Buckley and Seanna Johnson both had phenomenal outings.

Buckley led all scorers with 25 points (8-for-12 from the floor and converted all eight of her free throws). Buckley was 3-for-3 from the field and hit her lone 3-pointer during the fourth quarter.

“I thought Jadda was really good,” Fennelly said. “She is a tough cover when people know she can shoot the three. She can go right or left.”

Johnson was, as Fennelly would say, “Seanna Johnson.”

The senior finished the night with a double-double scoring 15 points with an outstanding 18 rebounds. Johnson was up-and-down and out hustling the Panther defenders for her rebounds.

Even though Fennelly is proud of his team’s grit and effort against UNI, he was not pleased with two major aspect of his unit’s game: defensive rebounding and offensive consistently.

Throughout the 40 minutes of play, Iowa State snagged 28 defensive rebounds. Johnson had 15 of them. That means the rest of the nine players who saw action for Iowa State combined for 13.

“That’s embarrassing,” Fennelly said. “That just can’t happen. That has to get better.”

For the offensive consistency, Iowa State’s shot was up-and-down all game. In the first quarter, the Cyclones shot a mere 33.3-percent from the floor but then in the second period, they improved to 43.8-percent. The second-half was the same way.

The Cyclones advanced to 2-0 on the season against a solid team and will be looking to go 3-0 this Sunday at 6 p.m. against another in-state rival, the Drake Bulldogs in Hilton Coliseum. 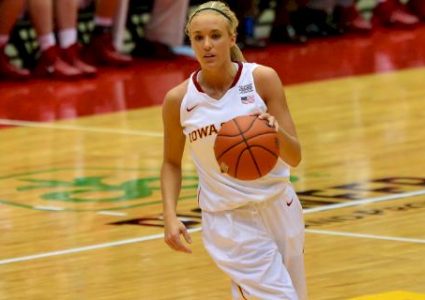