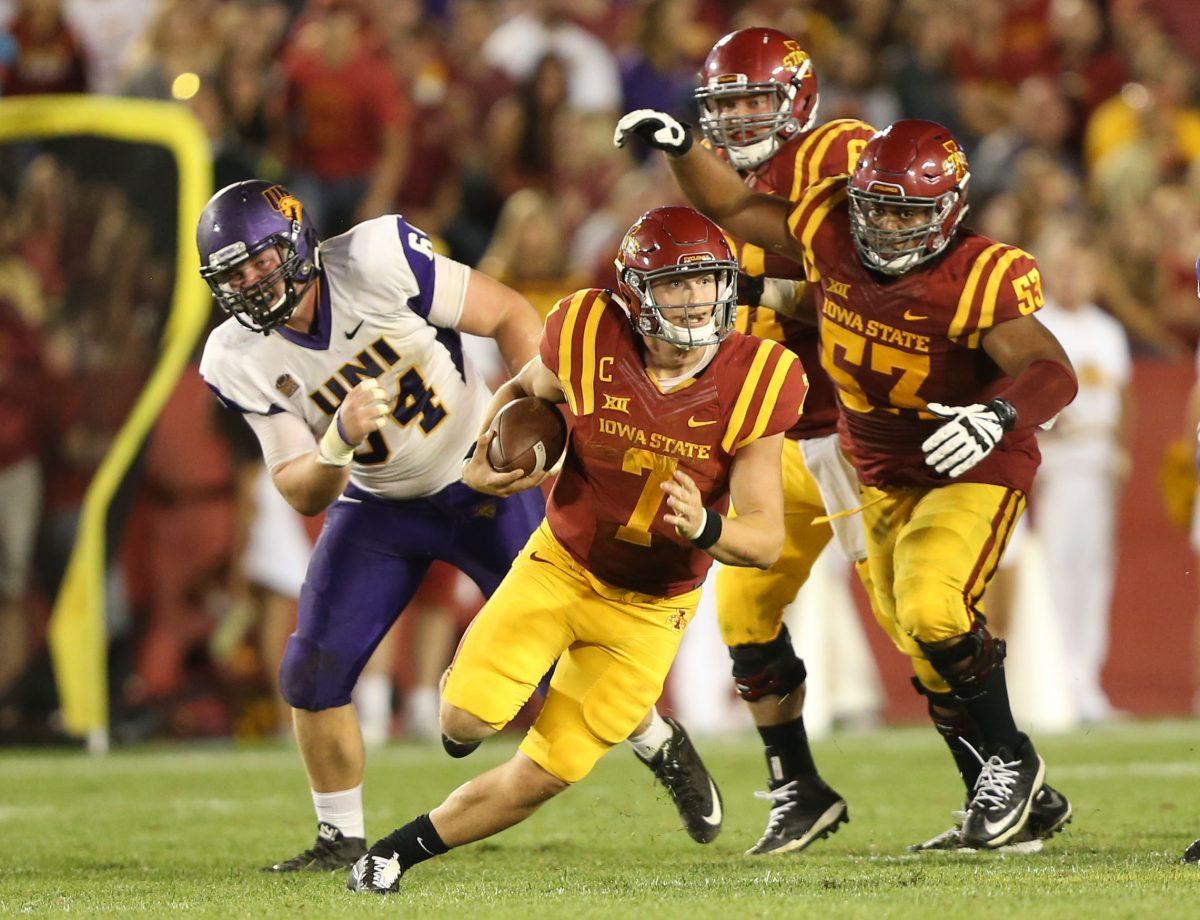 AMES — For precisely three minutes and 39 seconds of the fourth quarter, Iowa State fired on all cylinders offensively.

The Cyclones even overcame one of their nine costly penalties, as Joel Lanning engineered an eight-play, 69-yard drive to open a tenuous 20-19 lead with 7:02 left against Northern Iowa.

After the defense forced a three-and-out, Lanning threw one of his two interceptions — both came in the final five minutes — and UNI drove the field for the game-winning touchdown by third-string back J’Veyon Browning with 2:49 left.

Most of the game outside that brilliant 3:39 span for the Cyclones’ offense?

A muddled mass of misfires.

“Offensively, we were just so off,” said ISU coach Matt Campbell, who became the third straight Cyclones coach to fall victim to the Panthers in his cardinal-and-gold debut. “ We were always playing catch-up all night, rather than in any sort of rhythm.”

Here’s how the offense’s final three possessions ended: Interception, fumble, interception. All in a span of 6:12.

The Cyclones lost for the third time in the past six meetings with UNI.

And after praising the Panthers, Campbell and the two players made available to the media — Lazard and linebacker Regan Northrup — steered the finger of blame squarely upon themselves.

“We felt like we let them outperform us tonight,” said Lazard, who caught six passes for 129 yards while setting an ISU record with his 24th straight game with a reception. “We know our capability. We definitely didn’t meet our potential tonight.”

There are several reasons.

“Again, there’s aggressive penalties and there’s silly mistakes,” Campbell said. “I think some of those as we look at it — and I’ll have a better idea for you on Monday, what do those penalties really look like and where can we get better? But it’s a situation for us, especially when you’re talking offensive football, it’s really hard right now to play behind the chains. We have to have the ability to play in positive situations and when we get ourselves backed up, those are things that happen. Next thing you know we’re pressing and you turn the football over and some of those things that happened in the second half.”

That two came with the game on the line points both to how much the offense struggled to operate with any semblance of fluidity, and how hard it is to turn one game into a full reversal of past fortunes.

The Cyclones have now dropped three of their last four to FCS foes — granted good FCS foes, but teams that should not leave Ames with a spring in their step.

“I think that’s hugely frustrating. I think there was a lot of things that we’ve worked on in terms of attention to detail that didn’t get displayed tonight and that’s certainly an area that’s huge,” said Campbell, whose 2015 Toledo team was plus-eight in turnover margin. “How are you going to win a game when it’s 4-to-1? It’s just not going to happen. We’re not good enough, nor is anybody to overcome situations like that. That’s disappointing. We’ve just got to continue to obviously address them and we’ve got a lot of work to do with it.”

“Communication is key and it wasn’t where it should have been,” said Northrup, who led ISU with 13 tackles and a sack. “We’ve just got to play fast and make plays like we were supposed to, like we were trained to.”

Lazard said one of 12 games should not define this season.

“There’s still 11 more games that we have guaranteed and next week (at Iowa) is obviously a big game for us as well,” Lazard said. “We’ve just got to see the good things that we did tonight and be able to improve those as well as correct our mistakes.”

Campbell said effort was not a problem. Execution, especially on offense?

That’s very much a work in progress. UNI outgained ISU an unsightly 232 yards to 51 on the ground to spoil the start of a new era.

“We can’t just sit there and chuck the football for 60 plays and be successful,” Campbell said. “That’s not who we are offensively and that’s not what success looks like for us.”