The Big 12 released the 2016-17 men’s basketball schedule on Thursday and Iowa State will have one of the headlining games once again. The Kansas Jayhawks will visit Hilton Coliseum on Jan. 16, 2017 for ESPN‘s first Big Monday of the season.

Iowa State is 4-1 in Big Monday home games in the last three seasons, including last season’s 85-72 win over the Jayhawks.

The Cyclones will open their conference slate when Texas Tech visits Ames on Dec. 30. This will be the first time that Iowa State’s conference schedule has started before the new year.

Perhaps the toughest stretch of the slate for Iowa State comes from Jan. 28 to Feb. 11 when the Cyclones visit Vanderbilt, Kansas and Texas, plus play West Virginia and Oklahoma at home.

The regular season will close with a trip to Morgantown on March 3.

You can see the whole Iowa State Big 12 schedule in the tweet below. 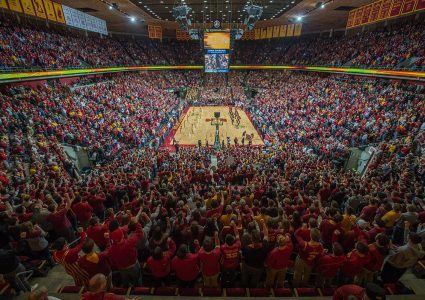