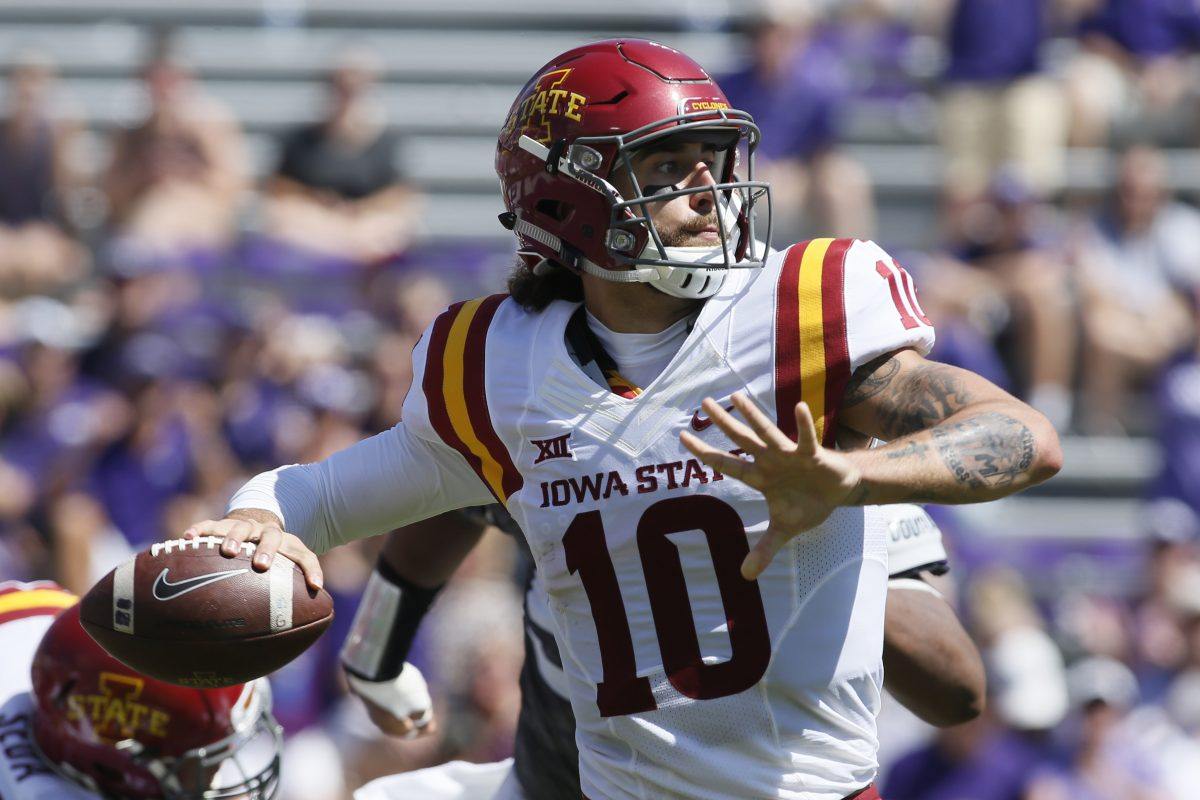 So goes the lyrics to the 1993 classic song Whoomp! (There it Is.) A song that most everybody born between 1975 and 1985 can still sing every lyric to. Surprisingly with their ability to string straight verbal fire together, the rap group Tag Team never had another hit and quickly departed the music scene, but for those few months in the summer of 1993, everybody recited the poetry that was the Whoomp.

As expected, Iowa State’s quarterbacks were the biggest storyline after the San Jose State game. But for the first time in my cognitive Iowa State memory, the musical chairs at quarterback not only functioned, it thrived.

Throughout the past decade, Iowa State has had perhaps the most erratic and uncertain quarterback play of any squad in Power 5 football. And it’s not entirely the quarterbacks fault.

Iowa State has not started the same quarterback for every game in the same season since Austen Arnaud in 2008.

In 2009, Arnaud was injured and Jerome Tiller started games against Nebraska and Texas A&M.

In 2010, Arnaud missed the UNI and Missouri games. Tiller got the start.

Prior to the 2011 season, Tiller was suspended for the season. Steele Jantz beat out Jared Barnett and lit the world on fire in his first three games, then fell apart. Barnett came in relief of Jantz against Missouri, played majority of the next game against Texas A&M and proceeded to win the job and start the final six games.

In the 2012 season, Jantz beat out Barnett again, struggled mightily and was replaced by Barnett in game five against TCU. Barnett started three games before being relieved of his duties by Jantz, who proceeded to get replaced at Kansas by Sam Richardson. Richardson started the final two games of the season.

Fast forward to 2013. Richardson dealt with injuries all season (including getting hit by a car while on a moped), gets removed in game seven by Grant Rohach. Rohach started the final five games.

New offensive coordinator Mark Mangino took over in spring of 2014. He is determined to play one quarterback.

In 2014, Richardson beat out Rohach. Richardson played serviceably, but gets pummeled at Oklahoma, forcing him to miss the next game. Rohach started, struggled. An injured Richardson returned and started the final three games.

Last season, Richardson again gets the nod. He started the first six games. Joel Lanning comes in relief of Richardson at Baylor and steals the show. Chaos erupts after the game.

I am exhausted just reliving the cluster of a situation the quarterbacks have been put through. It’s no mystery, Iowa State has not had an offense that was better than 85th in the nation in passing efficiency at any point in the last eight years.  Think about that, Iowa State’s passing game has not even been close to average for eight years. The spastic passing game has been the single biggest issue for Cyclone Football over that time span and this is a program that has had its share of issues.

The quarterback gets the most attention for a reason.

On Saturday against San Jose St., the Lanning/Park duo combined for one of the most impressive displays from the quarterback in Iowa State history. Granted, San Jose St. is certainly not a defense that is threatening anyone, but Lanning/Park were exemplary.

touchdowns and no interceptions. That equates to an eye-popping 15 yards per completion and a passer rating of 228.83.

Iowa State has thrown for five touchdowns in one game just twice in history.

Lanning/Park’s combined passer rating was the best performance by an Iowa State QB since 2001. Seneca Wallace had a day that will likely never be topped. He was 22-24 for 301 yards and four TD’s against Baylor at Jack Trice Stadium. At one point, he completed a then Big 12 record 18 straight passes against the Bears in a 41-0 beat-down. His final rating was an astronomical 252.

But Iowa State’s two-headed quarterback against San Jose St. wasn’t far behind. They spread the ball around to nine receivers and four different Cyclones caught touchdowns.

It led to an unfamiliar feeling walking out of Jack Trice. There was legitimately nothing to complain about regarding the quarterbacks. Instead of a controversy, Cyclone Nation embraced the duo. Nicknames inevitably emerged.

Arm and Hammer. Thunder and Lighting. Park and Wreck.

The two quarterback system is certainly unconventional, but if both Park and Lanning play anywhere near as efficiently as they did against the Spartans, it can work.  They are just different enough in their skillset that it brings a new dimension to any defensive coordinator preparing for Iowa State. Also credit the often maligned Iowa State offensive line for allowing zero sacks and keeping the quarterbacks upright all game.

Unlike past years, if both quarterbacks know for certain they are going to play in the game, it creates a different climate and comfort than the haphazard, panicked changes in the previous regime.

I’m also confident at some point soon both Lanning and Park will be used on the field at the same time. Throw in former high school QB Deshaunte Jones and offensive coordinator Tom Manning has some toys for trickeration.

The attempts at a single quarterback system have been spotty at best for Iowa State over the past eight years, why not roll with the interchangeable tag team?

Whoomp there it is.