Kelvin Ateman didn’t know much about Iowa State when he showed up for the Sound Mind, Sound Body camp in Detroit last weekend.

He had previously heard about Iowa State’s proximity to Des Moines and that it is one of the top universities in America — that’s it.

That changed after the camp when ISU offensive line coach Tom Manning extended a scholarship offer to the 6-foot-4.5-inch, 299-pound, 2017 offensive tackle.

“Honestly, it’s a very underrated institution, football and academic wise,” Ateman told CF in a message on Tuesday. “But, trust me, very soon both will be recognized over many schools.”

Ateman has other offers from Toledo, Western Michigan, Western Illinois and Morgan State, making Iowa State the big fish in the pond so far. The Cass Tech product’s eyes were open.

“Many people would say that places like Alabama or Ole Miss are at the top, but it would be a school that is on a silent but deadly take over,” Ateman said. “Not just one conference, but all.”

It will be interesting to see how offensive line recruiting will play out for the Cyclones over the next month or so.

Georgia offensive lineman Caleb Chandler is set to visit this weekend, and there isn’t any doubting that he’s the top guy on ISU’s board. Missouri tackle Marquis Hayes continues to blow up on the trail and a return visit is expected from him this summer.

Those two guys seem to be the priority as the coaching staff tries to round out their class in the trenches that already includes Tyler Jost, Collin Newell and Jeff Nogaj.

That could change by the time Ateman makes his visit to Ames on July 24. 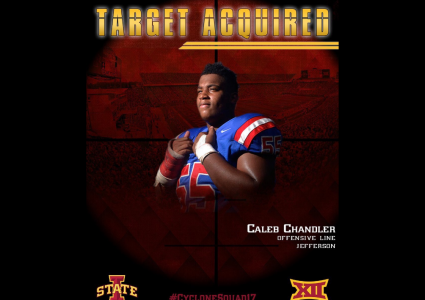 Two more offensive tackles have ISU high on their lists