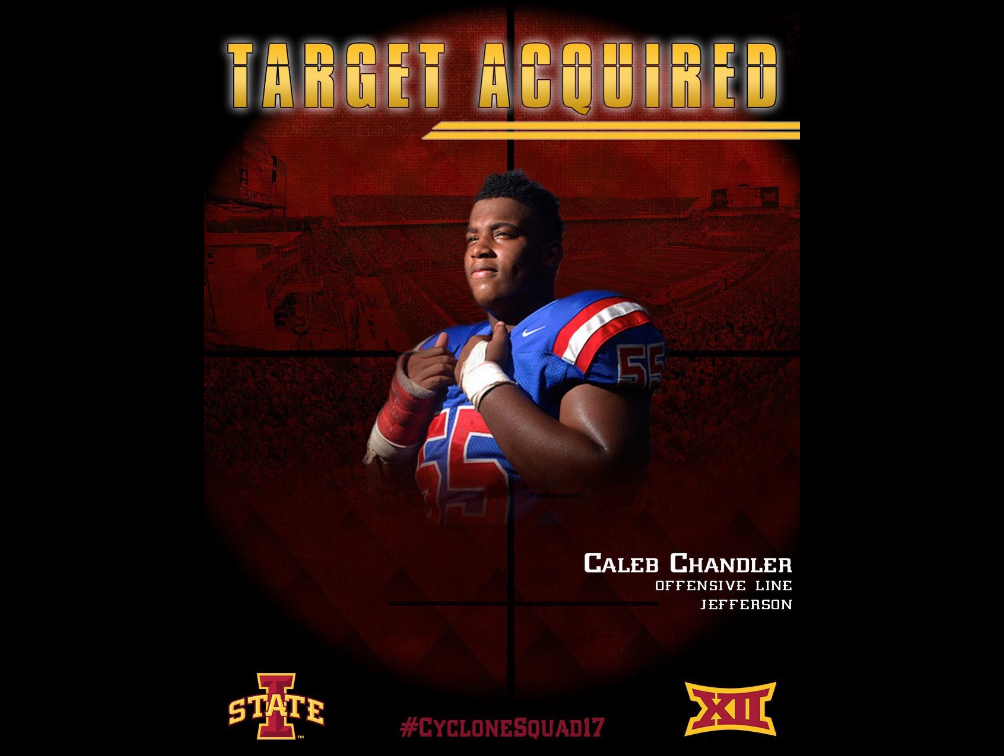 Reloading along the offensive line is one of the Iowa State coaching staff’s biggest tasks while putting its 2017 recruiting class. The Cyclones could realistically take as many as five players up front while three have already committed.

Libertyville (Ill.) tackle Tyler Jost, Ames tackle Colin Newell and Johnstown (Ohio) tackle Jeff Nogaj give the Cyclones a pretty solid group of commits already, but there are still some big targets still out there.

Four-star Jefferson, Ga. offensive tackle Caleb Chandler has become one of the Cyclones’ top targets over the past several weeks. Iowa State is in a good position with the 6-foot-5-inch, 285-pound prospect after offensive coordinator Tom Manning visited him at school on Tuesday.

“Great,” Chandler told Cyclone Fanatic in a message on Wednesday. “Loves me and wants me to play for him.”

Chandler said he plans to visit Ames sometime this summer before coming up with a top 10 around the start of his senior season. He mentioned Colorado State, Mississippi State, Missouri, Florida, Georgia Southern and Virginia Tech as other schools that he will likely check out during the summer months.

“They really want me to be a leader for their team and go win games,” Chandler said. “They showed me that I can be a huge/key player to the team!”

On Friday, Manning will be in to see another offensive line prospect in three-star Maryland Heights, Mo., offensive tackle Marquis Hayes. Hayes was named the offensive line MVP of last week’s Rivals camp in Kansas City and has been heating up on the trail of late.

Iowa State, Minnesota, Kansas State, Missouri and Illinois have all been pushing hard for Hayes’ services and he said more schools are coming into the fold.

The 6-foot-6-inch, 320 pound, prospect was in Ames for Iowa State’s junior day where he was struck by the facilities and the coaching staff.

“They first came to me on how they like me as a player,” Hayes told Cyclone Fanatic on Wednesday. “They told me what position I will play and how I should work to get better on things.”