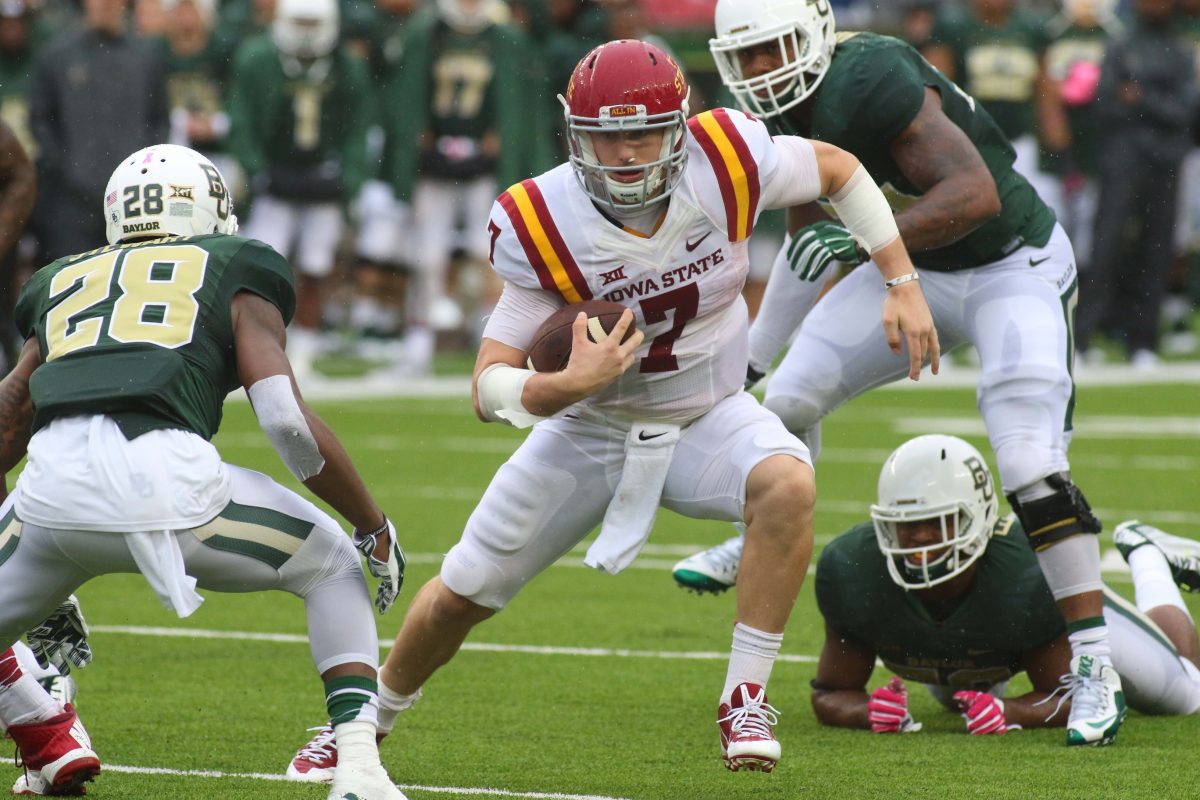 AMES — Joel Lanning settled on the most impressive thing about Saturday’s spring game.

It’s you — all 15,089 of you who formed the largest crowd in recent memory for the annual event at Jack Trice Stadium.

“It’s crazy that there’s this many people here for a spring game,” Lanning said.

Oh, and a semi-game took place, too. Lanning’s lone touchdown pass — a 47-yard fourth-quarter strike to Dondre Daley — proved to be the difference, propelling the Cardinal team to a 10-6 win over gold.

Defense dominated (touch sacks help — and Jhaustin Thomas had two). Lanning-led Cardinal converted just 1 of 12 third downs and the Gold team went 0-for-10 in the category.

Cause for concern? Are you kidding? Hell, no.

The crowd meant more than the stat lines. Always does in a spring game. For instance, star tailback Mike Warren sat this one out. And no, he’s not hurt.

“Mike will be ready,” Campbell said. “He had a really good spring.”

“If Lazard was in I’d probably throw it his way every time,” joked Lanning, who completed 11 of 19 passes for 161 yards.” So it’s nice to try to get the other guys and see what they can do. I know I’ve got other playmakers.”

This was all about enjoyment — a sandlot-style game played out on ISU’s well-groomed turf.

Mitchell Harger stood out, just like last year. The walk-on running back totaled 91 all-purpose yards and look good doing it.

Gabe Luna and Jordan Harris (who also ahem, was flagged for targeting) led all tacklers with six apiece. Kamari Cotton–Moya — whose daughter, Mylah, was in attendance — and Brian Mills both notched five stops. Former walk-on Trever Ryen caught four passes for a game-best 56 yards and also swept for 19 yards on three runs.

So, all in all, a good day. Vanilla as all get-out, but one that left smiles on people’s faces. Lanning laughed a bit when he was asked how far the playbook had been propped open.

“Not very much,” he said. “We don’t have a lot in. They said they were going to take it really slow with us all spring and they really did, which was fine, so we could execute.”

Lanning now embarks on another strength and understanding tour through summer. Last season, Lanning was the No. 3 guy behind center in the spring. When the Sept. 3 season opener against Northern Iowa rolls around, he’s expected to start his sixth straight game.

That’s growth of the rapid variety, with more to come.

“I thought he was really good today,” Campbell said of Lanning. “Obviously we didn’t get to play a ton of football and we were so watered down offensively — we were only running a couple things. But I thought he was really sharp throwing the ball. He managed the game really well. I thought his drives were really effective. Took care of the football. He’s really progressed every day and I really appreciate that about him.”

Now it’s time to fine-tune. Hone his game. Take the next step.

“Right now I’ve got to focus on that,” Lanning said. “Now heading into the summer it’s the next transition, so I’ve got to work on my feet and be in the film room. Do all that stuff and make myself better. … I feel like I’m in a big spot. Some of these guys are looking up to me and they’re relying on me. and I’ve got to rely on them. So I feel good, confident right now.”

EXTRA POINT: How about Chris Francis? ISU’s back-up kicker booted a 51-yarder into the wind in the first half, but a timeout had been called. Iced? Nope. They set the tee another yard back and Francis drilled it again.