“When they make runs in here, man, you feel them,” said Morris, who felt more than that in the late stages of ISU’s 85-78 loss thanks to a Frank Mason foul that dinged up his right shoulder. “It happened so quick. We were up, then bang, a 3, a layup — it’s like, ‘Damn.’ Then you feel like the fans against you, and your legs, but yeah man, I see why they always come out and protect their home court. It’s rough in there.”

Always has been, but the Cyclones (21-10, 10-8) answered each Jayhawks run until the final 3:13. That’s when they went “bang” on Senior Day. Landen Lucas tipped in a missed shot to but KU ahead, 72-71. Devonté Graham followed with another drive and score, followed by Perry Ellis and then the dagger: A Graham corner 3-pointer that gave the Jayhawks a 79-71 lead with 47 seconds left.

Kansas reeled off 11 straight points in a span of 4:22 to douse ISU’s hopes of averting an 11th straight loss in the Phog. Georges Niang led the Cyclones with 22 points, Jameel McKay notched a double-double with 19 points and 10 boards, and Morris added 11 points.

“We put ourselves in a position up here with three minutes to go, one-point game, and a chance to win here and that was our goal,” said ISU coach Steve Prohm, whose team fell in Lawrence for the 11th straight time. “That was our focus, that was our mentality all the way.”

It just wasn’t enough. Playing at Kansas means that word “almost” often tangles with the “bang.” And the latter wins. The Cyclones can undoubtedly point to positives entering next week’s Big 12 Championship as the No. 6 seed. They’ll open against third-seeded Oklahoma (8 p.m. Thursday) — and win or lose, it’s sure to entertain.

“We came out here and gave (Kansas) a good fight in probably the toughest environment in the country,” said McKay, who recorded his seventh double-double of the season. “So against Oklahoma, I don’t remember the last time we played Oklahoma where we didn’t have a fun game, where it wasn’t exciting or dramatic. So we know it’s going o be high-scoriae and fun. We know what they do. They know what we do. Nothing’s going to catch us by surprise. Whichever team can get the most stops will win.”

Same goes for the freshest legs. Morris said “for sure” he’ll play against the Buddy Hield-led Sooners, but noted again that fatigue, coupled with the blow to the shoulder, has become a factor. He welcomes a day off from practice Sunday, then the journey begins anew.

“Hopefully we see these guys again,” said Morris, who added four assists to one turnover.

And why not? ISU entered Saturday’s game having won four of the past five against the Jayhawks (two at Hilton Coliseum, two at Sprint Center). It’s a good matchup and it brings out the Cyclones’ best. It also wouldn’t be possible until the Big 12 Tournament final, and who wouldn’t be up for that in the deepening shadow of Selection Sunday?

A loss at Kansas can’t upset those. ISU did it’s best to close out the win, ringing up a 13-2 run to build a 3-point lead on Niang’s free throws with 5:09 left. What came next? The “bang,” of course. And that’s triggered by defense that precede the avalanche of layups, putbacks and timely 3-pointers.

“I feel like we’re close,” Morris said. “We’ve just got to keep getting stops. We ain’t gonna dwell on this. We were in a win-win situation, really. If we win here, it’s great. We we’re just coming down here to compete and we did that. So I feel like we’re on the up and up. Just a few more tough plays that we need to make.”

A few more treatments to get, too. Morris will rest his strained shoulder. Deonte Burton plans to be fine after a Perry Ellis elbow caused his tooth to pierce his cheek, which caused blood to flow from his face. This is March and blood will be spilled. ISU’s stitched up its wounds — both internal and external — and feel primed to create a "bang" of its own when it matters most.

"(Losing) is real disappointing, but that’s not going to take away from what this team could do in the future," Niang said. "We have a one-game season for the rest of the year." 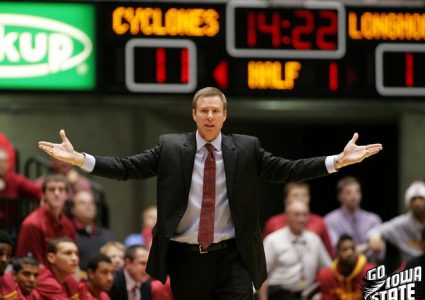 Cyclones come up short at Kansas