Going forward, "multiple" is a word that you will hear over and over again when Matt Campbell talks about his defense. He’s all about options, adjustments and flexibility.

That flexibility is what makes the 4-2-5 so appealing to Iowa State’s new head coach and that’s why it will be the Cyclones’ base defense.

“It give us flexibility and it gives us the ability to, you’ve heard me say this on offense, use our best players and put them in positions to be successful,” Campbell said after the Cyclones held spring practice on Tuesday. “Ultimately, that’s our job. Find out what these guys can do in 15 practices then sit back, reevaluate and then do a great job in the meantime then as we get into fall camp to put them in positions to be successful.”

Going to more of a multiple approach could greatly benefit the Cyclones after they ranked eighth in the Big 12 in total defense last season. That doesn’t mean the 3-4 installed by Paul Rhoads and his staff is completely going away. The Cyclones are going to use a lot of different fronts and like Campbell said, it really just comes down to figuring out ways to put guys in spots where they can make plays.

“I think the biggest adjustments were those defensive ends were playing four-i’s. You know, that’s tough to consistently play in there. Some of those guys were 240 pounds, 250 pounds doing that,” Campbell said. “Where as now they’ve got the ability to get on the edge, and not to say they won’t play four-i’s or they won’t be in some of those techniques. They will be. It’s just the ability to get on edges sometimes and the ability to put pressure on the quarterback. I think anybody that plays defensive end, you know, I’m a guy that played that position. I’ve been there done that. The ability to get on the edge sometimes, get after the passer, those are good. Those are good for our defensive tackles, too. Being in three techniques and shades and being able to play on the edge of an offensive lineman.”

“Now we’re more in attack mode,” Rasheed said. “We’re going to attack the line of scrimmage and really get to the quarterback.” 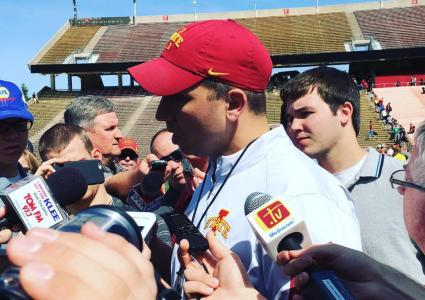