Jakolby Long likes to play defense, and he’s good at it too.

While most basketball players are setting goals of 25 points scored, grabbing 15 rebounds or dropping 10 dimes, Long is thinking about the other end of the floor. He has a goal for every time he steps on the court. He intends to hold the player he guards to fewer than five points.

“How often do you get that?” I asked the 2016 Iowa State signee in a phone interview earlier this week.

Long has blown up during his senior season leading Mustang High, the No. 6 team in the Oklahoma class 6A rankings. After going undefeated and winning the state title last year, the Broncos will look to take another step towards a repeat Friday night when they take on No. 2 Midwest City for a trip to the state tournament.

Defense isn’t the only way Long has been able to lead his team. He’s put up more than 30 points on multiple occasions. He’s racked up double-doubles one after another.

He’s been so good that he was bumped up to a four-star according to ESPN and joined the publication’s top 100 (at No. 100).

“I’ve been doing pretty good,” Long said. “My shooting percentage from the three, it has increased. And I’m getting my team more involved when I’m playing the game. So it makes it easy for me, and also for my team, to win.”

You can see the versatility in his game from the second you hit play on his highlight tape. He scores inside and outside with a smooth lefty stroke. He’ll grab a rebound and take off on the fast break.

He can finish through contact and high above the rim with slam dunks. It’s no wonder Kansas State, Oklahoma State, Ole Miss, SMU, South Carolina, Texas Tech and Wichita State were all among the schools clamoring for his services for four years.

“They want me to come in and just play my game,” Long said about his expected role on the team as a freshman. “They want me to score also and then play defense, be a lock down defender for the team.”

You can just hear the confidence in his voice when he gets to talking about his game. He’s one of those guys that knows he’s good.

While some players might see being good as good enough, Long sees it as a reason to keep working. A reason to keep getting in the gym and preparing himself for his opportunity in Ames.

“Everything has some room for improvement,” Long said. “So I’m going to be working on everything in my game.”

He’s set to arrive in Ames before June 1. But first, there’s business to finish back home. He obviously wants to repeat as a state champion.

While Long has been busy with his senior season, he’s been able to keep tabs on the Cyclones. Long attended both the games in Stillwater and Norman. He caught a few more on TV.

“I think they’re doing pretty good,” Long said. “We just made bad plays down the stretch for our losses. That’s just part of playing basketball. I think we’ll be fine when we get to Big 12 conference and also the NCAA tournament.” 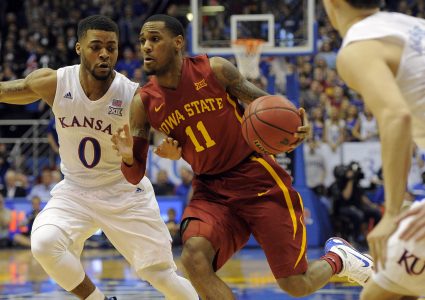 Monte Morris on why he’s returning for his senior season