It isn’t a secret that Iowa State men’s basketball has hit new heights over the past several years when it comes to wins and Big 12 success. Currently, only one team in the Big 12 has a winning streak against the Cyclones thought.

It isn’t the Big 12’s 11-time reigning champion. It isn’t the team that has spent most of the conference season atop the polls, or one with a legendary coach.

The only Big 12 men’s basketball team with a winning streak against Iowa State is Baylor.

Led by the often-criticized Scott Drew, the Bears have won three straight games against the Cyclones (including two in a row at Hilton Coliseum). Iowa State hasn’t won in Waco since 2013 when Chris Babb and Tyrus McGee led. It was only Iowa State’s second win in Waco in program history.

When was the other time before that? A guy named Marcus Fizer was patrolling the lane and the Cyclones were on their way to the Big 12 title.

To put it simply, Waco is where Iowa State’s dreams have gone to die. It gets interesting once you ask the question of why that is. What is it about Baylor that has made it so difficult for Iowa State?

That’s an especially tough question to answer when you think about how different every game between the two teams has been. There are been full-out grinders that went down to the final minutes (see Lester Medford buzzer-beater, 2015) and blowouts on the national stage (see DeAndre Kane 30-point game, 2014).

Then there was the 3-point barrage that sunk the Cyclones at home in 2015 and Johnathan Motley’s coming out party earlier this season. It’s been different guys doing different things in different ways when Baylor has beaten Iowa State.

The two games the Cyclones have won in the last three years were both drastically different. Kane’s explosion for 30 points came in a game between two top-10 teams. It ended in a 15-point Iowa State win. That same season Iowa State had to fight their way to a win in the Big 12 tournament championship game.

There’s only been a few things that stayed the same in all of Baylor’s wins against Iowa State. They had double-digit rebounds and they shot a better percentage from the floor. Add in the fact that some of Iowa State’s best players have played poorly and the Bears have had some role players step up.

There hasn’t really been anything fancy about this streak. The Bears have really just had Iowa State’s number, just like the Cyclones have had the number of some of the other teams in the Big 12.

They’ve also had Scott Drew (who owns a 9-10 record against the Cyclones). We all know that "Mr. Sweet 16" is worth a few wins on his own. 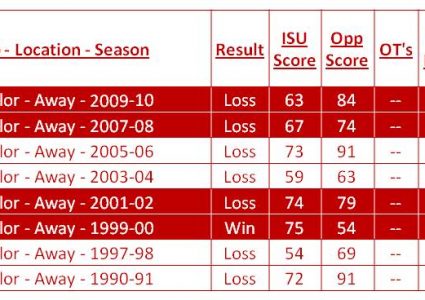