ISU’s faced plenty, but perhaps its biggest mental test loomed Saturday, when they traveled to Stillwater to take on struggling Oklahoma State.

The No. 13 Cyclones’ leading rebounder, Jameel McKay, not only didn’t play, he didn’t travel because of suspension. Couple that with a startlingly frigid start and ISU would find itself staring at a 10-0 deficit.

Then a switch flipped. Deonte Burton — who made his first start in the suspended McKay’s absence — dropped a 3-pointer. More shots fell from deep and the defense intensified. It all added up to a flawed, yet impressive 64-59 win over the also-depleted Cowboys before a sparse crowd at Gallagher-Iba Arena.

Niang scored 16 of his team-high 18 points in the second half and also grabbed nine rebounds. Matt Thomas and Monté Morris added 16 points. Thomas hit 4-of-6 from deep. Morris peeled off eight assists with nary a turnover.

“You don’t ever see him get too high or too low,” Niang said of Morris. “He’s our heartbeat.”

And how’s this for closing: Niang and Morris combined for 29 of their team’s 42 second-half points.  Burton added 11 points while churning out four steals. Hallice Cooke added a long-range hoop off the bench. The Cyclones — who own a six-game win streak against Okie State — shot 57 percent after trailing 24-22 at halftime.

ISU (17-6, 6-4) won its third straight at Stillwater despite falling behind 10-0 early and looking lost on both ends of the floor for the first 10 minutes. The Cyclones have won three straight Big 12 road games for the first time since the 2014-15 season.

"People were probably panicking," Niang told the Cyclone Radio Network. "But deep down we knew we had the drive in us to get back."

The Cyclones played without McKay because he is suspended indefinitely. McKay hinted on Twitter Friday night that his suspension — which is not legal-related — would last only one game. Good thing, if true.

The game unfolded in strange, perplexing and ugly ways during a first half that ended with ISU somehow down just 24-22. How bad was the start from the Cyclones’ perspective? They didn’t score in the first 5:46 and faced that double-digit deficit while looking discombobulated and frustrated.

Burton — who made his first ISU start in McKay’s absence — drilled one from deep to make the score 10-3. Call that a trend-setter. Four consecutive 3-pointers followed from Thomas, Burton again, Cooke and Morris. Suddenly the Cyclones led 15-12 with 6:30 left and they at least were squarely back in the game.

Turnovers hurt ISU yet again early. They committed five in the first six minutes and nine overall before the break. Niang again battled foul trouble and didn’t score a basket until converting a baby hook 53 seconds before halftime.

But the disastrous start obviously didn’t doom the Cyclones — in part because the Cowboys struggled as well, hitting just 38 percent of their first-half shots while scoring a mere 11 points off ISU’s spate of turnovers.

ISU made better ones — particularly at halftime.

The Cyclones hit eight of their first 12 shots in the second half to surge to a 40-33 lead on a Burton drive and scoop.

Niang them added a 3-pointer to put ISU up 10. The lead would expand to 13 after a Morris 3-pointer, but the Cowboys would revive, eventually taking a 55-54 lead on a Tavarius Shine 3-ball.

That edge lasted 12 seconds — and wouldn’t be replicated.

Morris put ISU up for good with a short jumper with 3:10 left and sealed the win by hitting both ends of a one-and-one with 13.5 remaining.

"Niang set a random screen," Morris said when asked about the clutch shot that preceded his free throw trip. "I just went full speed and finished through contact. That’s just me trusting myself and my teammates."

Morris and Niang scored the Cyclones’ final 12 points. Closers, both of them.

"They’re as good as anybody in the country and obviously we wouldn’t trade them for anybody," Prohm said. "In the big wins that we’ve had, those guys have really stepped up to the plate." 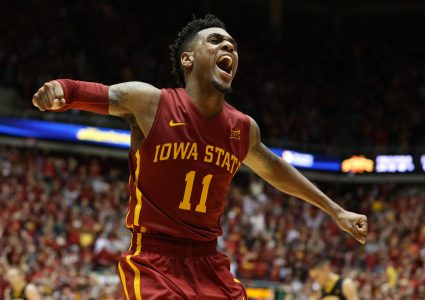