AMES — Iowa State’s (21-9, 10-7) much-anticipated Senior Night that produced its fair share of tears before the initial jump ball was dominated by – you guessed it – the seniors.

This wasn’t exactly a beautiful basketball game. In fact, it was probably as ugly of one as we have seen in Hilton all year. As is often the case on emotional senior nights, the home team came out sluggish and only led by two at the break.

It didn’t take long for No. 21 Cyclones to overwhelm Oklahoma State in the second half though, as Iowa State out-scored the Cowboys 24-9 in the first 10 minutes of the period.

Iowa State’s third senior that was honored, Jameel McKay, wasn’t much of an offensive threat in the win but did pick up where he left off with hustle and energy on the glass and defensively as well. McKay had 10 rebounds to go with his six points.

Iowa State’s 58 points were a season low. The Cyclones previous low was a 62-point output in a loss at Texas A&M on Jan. 30.

Luckily, the Cyclones held Oklahoma State to 31.7 percent shooting while the Cowbows went 4-for-27 from 3-point range.

It marked Iowa State’s second win in a row leading up to Saturday’s regular season finale at Kansas (3 p.m. on ESPN). Cyclone Fanatic’s Rob Gray and Jared Stansbury will be in Lawrence covering the game and of course, our crew will be in Kansas City for next week’s Big 12 Tournament. 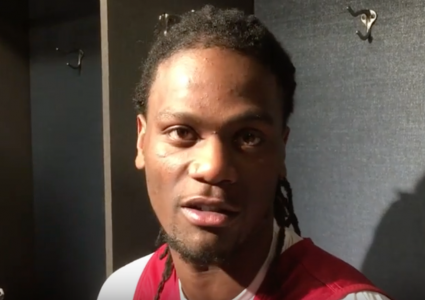 CFTV: Cyclones vow that focus is sharp in Denver