The Texas A&M Aggies have been one of the nation’s hottest teams over the past several weeks putting together a 10 game winning streak and starting SEC play with an undefeated 7-0 record.

Both of those marks came to an end Wednesday night in A&M’s loss to Arkansas but that doesn’t take away from Billy Kennedy’s team did to rise to No. 5 in the AP Poll. They’ve used unselfish, balanced and up-tempo play to put together a very fun brand of basketball.

While the Aggies hang their hat on their defense (No. 24 nationally in scoring defense, No. 6 in KenPom’s Adjusted Defense), their offense is high-powered with three double-digit scorers led by senior guard Jalen Jones at 17.1 points per game.

A couple weeks ago after Iowa State’s loss to Texas, I begrudgingly went back and looked at the tape of the Cyclones’ defensive woes. Those problems have started to become a thing of the past for ISU so I’ve decided to turn my attention elsewhere.

Today we’re going to step into the film room to break down the actions and tendencies of the Aggies as they isolate Jones and their freshman center Tyler Davis. All the Vines used in this post are from A&M’s 71-57 win over LSU on Jan. 19.

I’ll admit I didn’t know much about Jalen Jones before I took on this task. I knew he was Texas A&M’s leading scorer and from his numbers I could tell that he is explosive.

Explosive would be an understatement in describing Jones after watching a couple of his games. Against LSU he put in 20 points and on the road at Tennessee he poured in 28.

He’s a pure scorer that can get the job done in a lot of different ways. At 6-foot-7-inches, I would say they use the term guard loosely on the team roster. He plays more of an undersized four position and spends a lot of time as the pick man in pick and rolls (which will be referred to as P&R’s from now on).

In this first clip, you’ll see Jones with the ball at the top of the key to start before following his pass to set a ball screen.

Jones’ defender hedges hard which allows him to open on the roll despite not setting a very strong pick. Once he’s isolated with the help-side defender it’s pretty much game over.

When that defender starts hedging higher, Jones is susceptible to slipping the screen straight the basket. This is a pretty basic basketball principle but Jones is very good at recognizing it.

This is another situation where if the help is just a half-step slow it’s almost a guaranteed basket (or in this case dunk). Defenders need to stay disciplined with their defensive principles (plus avoid wildly jumping on pass fakes like LSU’s Ben Simmons).

The last clip I pulled of Jones is possibility my favorite as it took the most work from him.

Jones is once again the screen man but this time instead of hedging the defenders switch. That takes away the roll from the initial passer but LSU’s back-side help has now swung.

Recognizing this Jones seals the guard high off the screen instead of rolling hard to the basket turning into an easy lob.

It will be interesting to see the way Iowa State tries to defend this look and all the different ways A&M can attack out of it. Teams had the most success stopping it when putting pressure on the ball-handler off the dribble and not allowing them much room to breathe.

I have to admit I developed a full on hooper crush on Tyler Davis while watching these games. I’d heard before that he could be the best freshman big man in the country but I couldn’t believe it until I saw it with my own eyes.

I’ve seen it with my own eyes and, oh, it is something.

At 6-foot-10-inches the Plano, Texas native is averaging 11.3 points per game and shooting over 65 percent from the floor. He’s got good foot-work, soft hands and does his work early in the post.

He’s also really good at reading his defender and that comes into play in the first clip.

Obviously there isn’t anything crazy about what Davis does here. He doesn’t even score but gets fouled on the post-up. Some of you might be saying, “What’s Stansbury talking about? Has he gone nuts?”

I have gone nuts. Nuts for the bury!

Post players are taught to bury their men underneath the hoop at every opportunity possible. Davis saw his defender standing underneath the rim with his legs straight and smelled blood.

He ran down there, lowered his hips and slammed the guy almost back to the baseline. The defender’s only options were get scored on or foul. He chose foul.

The next clip is another perfect example of doing work early to get a good seal.

Once again, nothing too special from Davis. He recognizes that his man is standing flat footed in help-side which opens him up to get a good seal.

Then he comes up with the nice catch and finish. It isn’t anything special. It’s just pure big man fundamentals.

This clip Davis does a good job of finding his defender in transition to get a seal.

He recognizes that his man is behind him in transition and plants his feet square in the middle of the lane. The defender isn’t ready for the seal to come high which keeps him caught on Davis’ right shoulder.

Davis then shows the concentration to make the catch and finish despite the pass being tipped.

One more and then I’m out of here. Davis recognizes his defender flat-footed in the middle of the lane again and uses that to his advantage.

Those big men are so graceful, aren’t they? Wait, don’t answer that.

Teams had success sending multiple defenders at him and that probably plays a role in him averaging close to two turnovers per game. Iowa State will likely have to send at least one man to dig down on him, especially if Jameel McKay isn’t able to go.

Now if you’ll excuse me, I have more games to watch. I’m starting to come around on the idea of re-watching games. 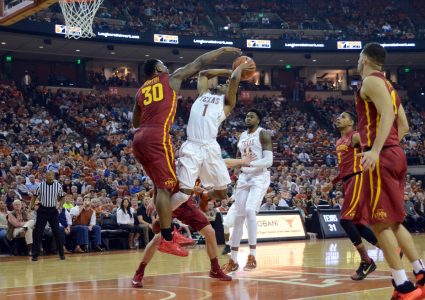