AMES — Even as a player, Tom Manning knew to carve out a career in football, he’d need to learn how to coach.

“I certainly was not a Big 12 player — at all,” said Manning, who not only is now a Big 12 coach, but Tuesday was elevated to Iowa State’s offensive coordinator spot. “So I decided to go to Mount Union College at the time because of the reputation of the coaches.”

Manning, 32, became a two-time all-conference talent as a left tackle at the D-III level, but his coaching roots burrow back to his days of starring as a player at Ursuline (Youngstown, Ohio) High School.

“I played for a very successful high school program and the guy that was the head coach there is a guy by the name of Jim Vivo,” said Manning, who will continue as the Cyclones’ offensive line coach in addition to his broader duties. “In fact, I talked to him this morning. He had such an effect on my life and a lot of similarities I think with (ISU head) coach (Matt) Campbell and coach Vivo.”

Manning remains a top-four candidate for the FootballScoop.com offensive line coach of the year award. His lineman allowed the Rockets to rush for, at minimum, an average of 213 yards per game the past three seasons. Toledo ranks second national in sacks allowed this season at a mere .36 per game — and four total.

“Tom was a co-coordinator at Toledo,” Campbell said. “Did a great job with our running game there and between him and (now-Toledo head coach) Jason (Candle), both guys did a great job leading that, and my background, still being involved offensively a little bit, I think there was no question Tom’s like a rising star in this profession, obviously. Just ready, I think, to take the reins.”

Candle, as is well known, spent some time with Campbell in Ames before returning to take the top spot at Toledo. Manning said working with him — along with his own past pedigree with Vivo, Mount Union’s Vince Kehres and Campbell — helped prepare him for this climb to a power-five coordinator’s perch.

“He’s a fantastic coach and a fantastic man,” Manning said of Candle. “I think he’s kind of bred me in that along with coach Campbell. I was actively involved in our play-calling and especially in our game-planning situations.”

Manning said if you want to understand his offensive philosophy, find some Toledo video.

A solid line stands paramount. A few star running backs are required. A dual-threat quarterback is preferred, but not essential. Big, athletic targets among the receiving corps help balance out the equation.

“I think you’ll see kind of really our whole philosophy," Manning said. "We have always been a team that’s been based upon players, formations and plays. We want to get our players, the best players, the opportunity to get the ball the most. We have had great success at running the football and our plan is for that to continue to happen and then I think with the quarterback (Joel Lanning) that we have I think there’s going to be a lot of different things and different opportunities that you’re going to have offensively as well. Our philosophy is to do what our players are really good at.”

Toledo even replaced five starting offensive lineman this season without seeing much of a dip in its offensive productivity. Next season, ISU must make up for the absence of three senior stalwarts: center Jamison Lalk, tackle Brock Dagel, and guard Oni Omoile.

“I think there’s, when you look at that group, there is (a) little bit of experience returning there and I’ve been down that road before,” Manning said. “We lost five guys before and had to replace those guys and I think the biggest thing to understand is when you lose people, you’re never really sure of what that next group can do until they have the opportunity to do so. It’s really early as far as those things go but we’re excited about the opportunity to work with some of those guys. I think (Jake) Campos has proven that he can play at this level. Excellent young man and a kid of great character so we’re excited about him. Obviously with (Daniel) Burton — he’s been a rock here for a long time and even guys like (walk-on) Nick Fett that came in and played against Oklahoma State, he did a fantastic job, he really did. For us I think, we’ll know more about truly what the pieces are in once we’re able to really get in here and get our hands on the guys. But for right now, we’re just kind kind of excited about the opportunity to put this whole thing together.”

Lanning was among the ISU players (along with other obvious standouts such as Mike Warren and Allen Lazard) to make a strong impression on Manning when he first entered the game as a change-of-pace quarterback in the Cyclones’ 30-23 double-overtime loss at Toledo.

For all you alternative uniform fanatics out there (and there are lots of you), Campbell shared some possibly positive news on that front:

“I’ll tell you this: I’m a traditionalist in a multitude of different ways, but I really believe in the uniform piece and the excitement that can bring,” Campbell said. “I think there’s great tradition here in terms of logo and those kind of things, but I think there’s a lot of coolness that we can do to unify our fans, excite our fans and excite our own players. That’s football today. Sometimes, I know some of the staunch traditionalists, they have an issue with that and I get it. But I also get that we’re dealing with a different culture — 18-22-year-old kids. And quite honestly, even in the recruiting process, kids like to see new. Kids like to see exciting and I think that’s something that I’ve always been a huge part of and if you saw us at Toledo, we had a million different things going on, but staying within the tradition and the culture of what the tradition of Toledo football stood for.” 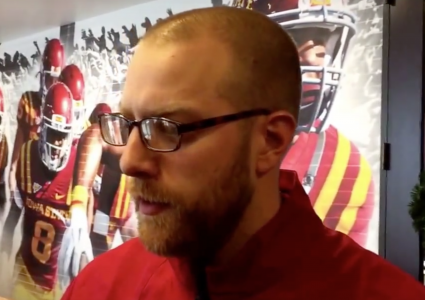