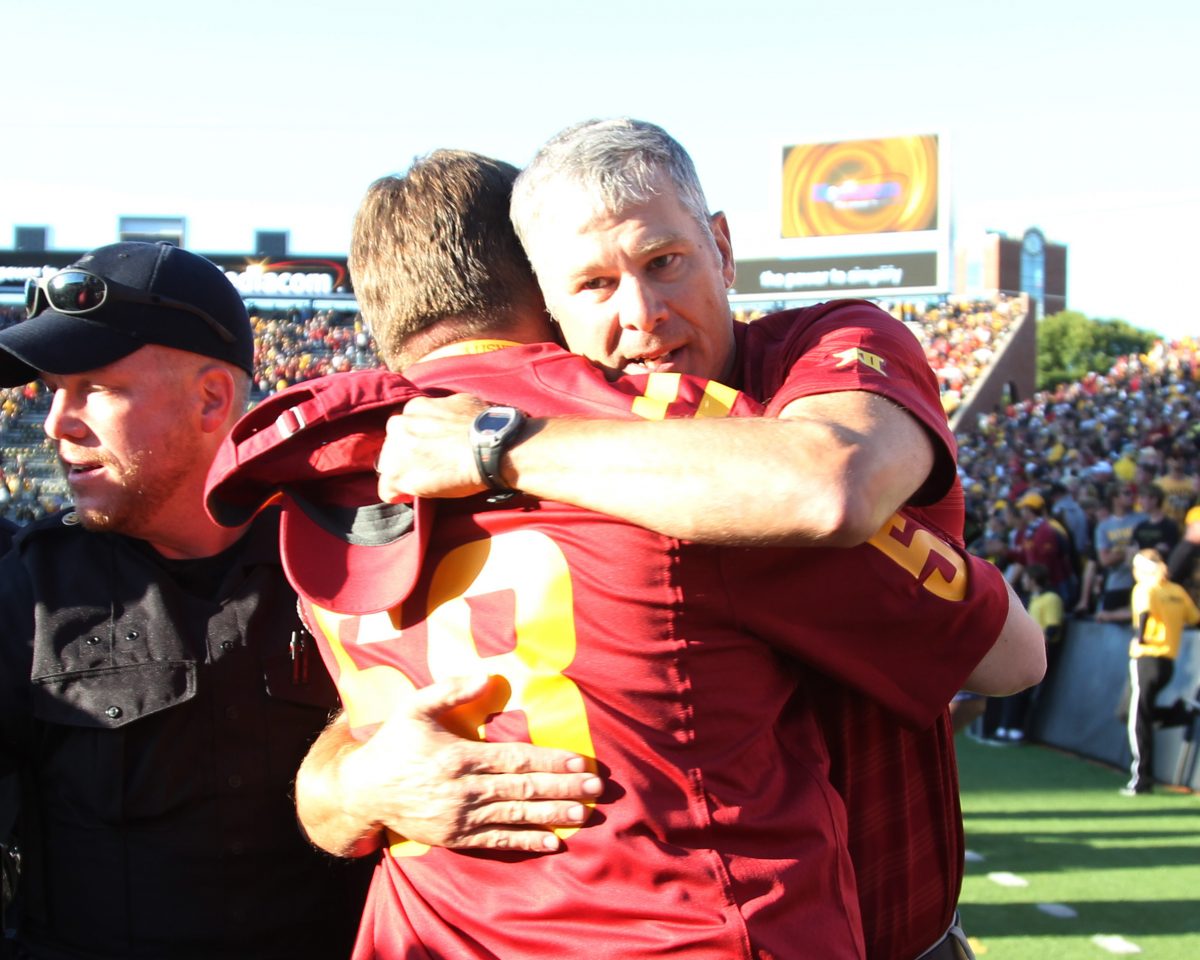 “It’s obviously not an easy thing to …” Omoile told KASI-AM and other media outlets after a hug-filled early-afternoon team meeting.

“I understand the nature of, just how coaching is,” the 6-3, 305-pound Omoile continued. “It’s a business. It’s based on results. It doesn’t make it any easier emotionally when he’s a guy who took you in, especially me, he’s a guy that took you in when most other schools didn’t think you were good enough…”

Long pause. Deep breath. Rhoads guided the Cyclones to three bowl games in his first four seasons, but none since 2012. ISU is 3-8 this season and lost 38-35 Saturday at Kansas State in jaw-dropping fashion.

“The fact that he had faith and belief in me, in my case specifically, uh …” Omoile went on.

Long pause. Deep breath. Rhoads is a Nevada native, who grew up in Ankeny, and celebrated senior day with the outgoing Cyclones two weeks ago.

“He’s the same guy he always was, even when I first got here,” Omoile said softly. “He cares about us, You can see it in how he approaches it. His passion. It makes you want to give everything for him.”

Shorter pause. Deep breath. What will the mood be like in Morgantown? Last game for you, last game for him?

“I can’t even imagine it from an emotional standpoint,” Omoile finished. “Just in a word, probably, overwhelming.”

Few players spoke to media after the meeting. Those who did expressed surprise that Rhoads had been dismissed from the job he’d held for seven seasons.

“I just thought we were going into a regular team meeting,” said walk-on redshirt freshman running back Clifford Kwaw-Mensah. “Never saw any of this coming.”

Fans certainly did after the meltdown in Manhattan. ISU raced to a 35-14 halftime lead, then didn’t score again while fumbling away a seven-point lead — and the seemingly sure win over the Wildcats — in the final two minutes.

Memories of past stunning upsets became just that, memories. The Cyclones have been close to replicating some of the magic of Rhoads’ early years, including the near upset of top-10 Oklahoma State on senior day, but near-misses don’t equal breakthroughs.

Rhoads needed another one or two of those to materialize this season, but chances always seemed to evaporate in the second half.

Like Iowa. Or Toledo in the closing seconds of regulation. Or failing to hold 17-point and 21-point leads in the past two weeks.

Now just West Virginia remains. For Rhoads and for his seniors.

How will they respond?

“We’re going to go out there and give everything we’ve got, just like we have all year,” offensive tackle Jake Campos said.

As for today, all they’ve got left is a numb feeling. An acceptance, but a deep sense of melancholy. Appreciation for Rhoads rang out across Twitter — from Allen Lazard, Mike Warren, Demond Tucker, Jordan Harris, Trever Ryen and many more ISU players, past and present.

“I’m thankful for the opportunity he gave me to play at this level,” Warren tweeted. “Very genuine human being and is the most selfless person I know.”

The cold, hard truth of not enough wins vs. too many losses made this day inevitable. But warmth remains and the shared passion never left. It’s as strong as it ever was.

“Everyone was emotional,” Kwaw-Mensah said. “It’s sad day. At the end of the day, that’s your head coach, so you never wish that upon anyone.”