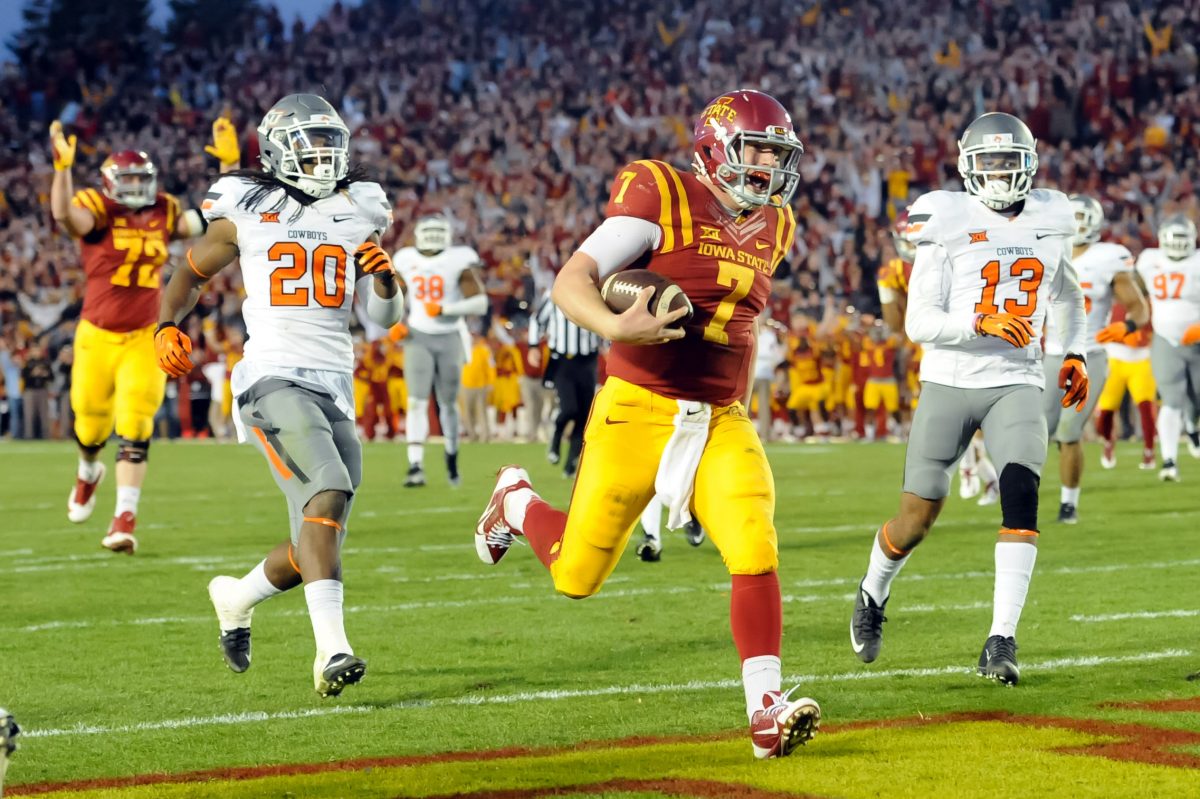 AMES — Paul Rhoads took the podium and spoke calmly, coolly and as if every ounce of energy had been drained from his body.

The demonstrative Iowa State coach didn’t pound his fist and decry controversial calls — which obviously existed in Saturday’s near upset of No. 5 Oklahoma State at Jack Trice Stadium.

He didn’t raise his voice, or speak from a wellspring of raw emotion. All of that had been expended on the field, over which loomed the demoralizing score: Cowboys 35, Cyclones 31.

“I think the kids would tell you there’s no fairy tales and no Cinderella and all that when it comes to this game,” Rhoads said after his team led for 56:54 — and by as many as 17 points in the first half. “It’s a man’s game. It’s fast, it’s violent, it’s physical and it takes hard men to play it. That’s how they went about it. They went out to win it with that in mind.”

For so much of the game, ISU (3-7, 2-5) seemed destined to recreate Jack Trice Stadium magic, a la the 2011 stunner of Oklahoma State that shook up the now-defunct BCS.

The Cyclones scored on their first four possessions. Quarterback Joel Lanning excelled both on the ground and through the air, powering for a 24-yard touchdown run and a 24-yard scoring strike to Allen Lazard.

Joshua Thomas added a one-yard trudge to the end zone to put ISU ahead 24-7 and the Cowboys appeared to have their spurs stuck in the mud.

“The first half we came out and we were ready to go, so I don’t really know what happened in the second half,” said Lanning, who rushed for 130 yards and threw for 162 more. “We just kind of fell off offensively a little bit.”

One of those early scoring drives ended in a field goal. You know, the third one. Lanning threw low to Trever Ryen across the goal line, who cradled the ball in the crook of his arm for an apparent touchdown. Officials signaled a score. A booth review followed. And to the Cyclones’ dismay, the ruling was overturned and Cole Netten kicked a 21-yard field goal.

Said Lanning: “It didn’t look like it touched the ground at all. I don’t know. If we get that then it’s 35-35 and we might be in overtime right now trying to win the game. It’s a big game-changer, but it was a bad throw and who knows.”

The replay official saw it differently.

It’s the type of call that always seems to burn ISU, but it’s also an event that must be overcome to forge a winning season.

“We were just going in there trying to play the game and keep fighting (all the way) and try to get a ‘W,’” said Lanning, whose last-gasp throw from the ISU 5-yard line with 1:38 left turned into an interception. “The fans were awesome tonight. It wasn’t full, but it was still really, really loud, so it was awesome.”

Oklahoma State (10-0, 7-0) dominated the second half, outgaining the Cyclones 259 to 104 and outscoring them 21-7 — including 14-0 in the fourth quarter. The typically fast-striking Cowboys chewed up clock, possessing the ball almost eight minutes more than ISU in the second half alone. Their three second-half touchdown drives took a combined 13:42 and featured four third down conversions with six more more yards to go.

" I remember looking up at the clock and Okie State had one possession in the third quarter and we had one and there were like three minutes left in the third quarter," Lanning said. "It was crazy how there were only two possessions. Mike was running the ball great, I was running the ball well, and we were rolling as an offense that first quarter and we carried it through the third a little bit and just couldn’t get it done in the fourth."

Okie State’s most damaging third down conversion came after a false start rendered an incompletion moot on what became Oklahoma State’s winning possession. A third and 15 conversion followed and J.W. Walsh’s 8-yard pass to Jeff Carr completed the game’s scoring with 3:06 remaining.

“We never let up or anything like that, it’s just little things that happen,” said ISU senior defensive end Dale Pierson, who tied the school’s single-season sack record of 8.5 by recording one Saturday.

Despite all that, the Cyclones had a chance down the stretch.

Lanning hit D’Vario Montgomery for eight yards as the two-minute drill unfolded. Then he completed a pass to Carson Epps that looked to be on or just past the first down marker. But officials set the ball down almost a yard away and a pass intended for Lazard fell incomplete. A fourth down run by Mike Warren — who earlier became the first Cyclone to surpass 1,000 yards rushing in a season since Alexander Robinson in 2009 — was stuffed.

But the question loomed: why throw on third down? Rhoads explained that decision as follows:

“We thought we got the first down, yeah,” he said. “From our view, on the spot, it sure looked like a first down. Line to gain is something that they’re supposed to stop to review if they feel it’s necessary. So we made a call based on what we thought was a first and 10 play. Regardless, we throw a ball out there and we don’t hit it. We still come back and run the same play on fourth and 1 that you would have ran on third and one to pick up the first down and move the sticks. Gotta execute. You’ve gotta block, you’ve gotta run, you’ve gotta get that first down.”

They didn’t. So no fairy tales. No Cinderella. Just another long winter bereft of postseason play for the third straight time.

“We’ve played against some tremendous opponents and today was no exception to that,” Rhoads said. “Our kids have fought and battled in each and every single one of those. Put ourselves in a position today to win at home and win for the seniors and win for the fans and win for this program. They’re crushed right now. Crushed. Tonight, they’ll remain that way and tomorrow I’ll get my first opportunity when they get treated and eat and I’ll take advantage of that. Get them headed in the right direction and Monday we’ll see what we’re made of. I’ve got a pretty good idea what that’ll be.”

*** Warren rushed 15 times for 73 yards to push his season total to 1,070 yards, despite missing some time with a lower back injury.

“Just working this whole season, this whole grind just for that one mark it’s all worth it,” the redshirt freshman said. “I thank (the O-line) a lot for helping me get there.”

*** Joshua Thomas notched his seventh rushing touchdown of the season — a freshman record.

*** Lanning’s 130 yards on the ground were the most by an ISU quarterback since Sage Rosenfels ran for 140 in a 2000 game at Colorado.

“I had my dad here, both of my sisters, my brother in law, my best friend growing up and his sister and my girlfriend and my daughter here,” Pierson said. “I was definitely happy my family could come out here and watch me play. … Just happy they were here to support me.”

Iowa State enjoyed a big boost when Levi Peters forced and recovered a fumble by the Cowboys’ Blake Jarwin with 2:56 left in the third quarter. The takeaway led to ISU’s only second-half touchdown, a Lanning 21-yard run. Oklahoma State punted on its next possession, as well, but the positive momentum wouldn’t last.

“I thought two touchdowns in the second half would win the game,” Rhoads said. “It certainly would have. We got that one, we just couldn’t find a way to get the second. We took advantage of the momentum it created at the time and kept playing hard to the very end. That offense, they’re good. We did an awfully good job for a good bit of containing them and not giving up the big plays that they’re used to (getting). Sometimes they couldn’t sustain and they made their own mistakes and we made plays, but too many times they did and drove the ball on us.”