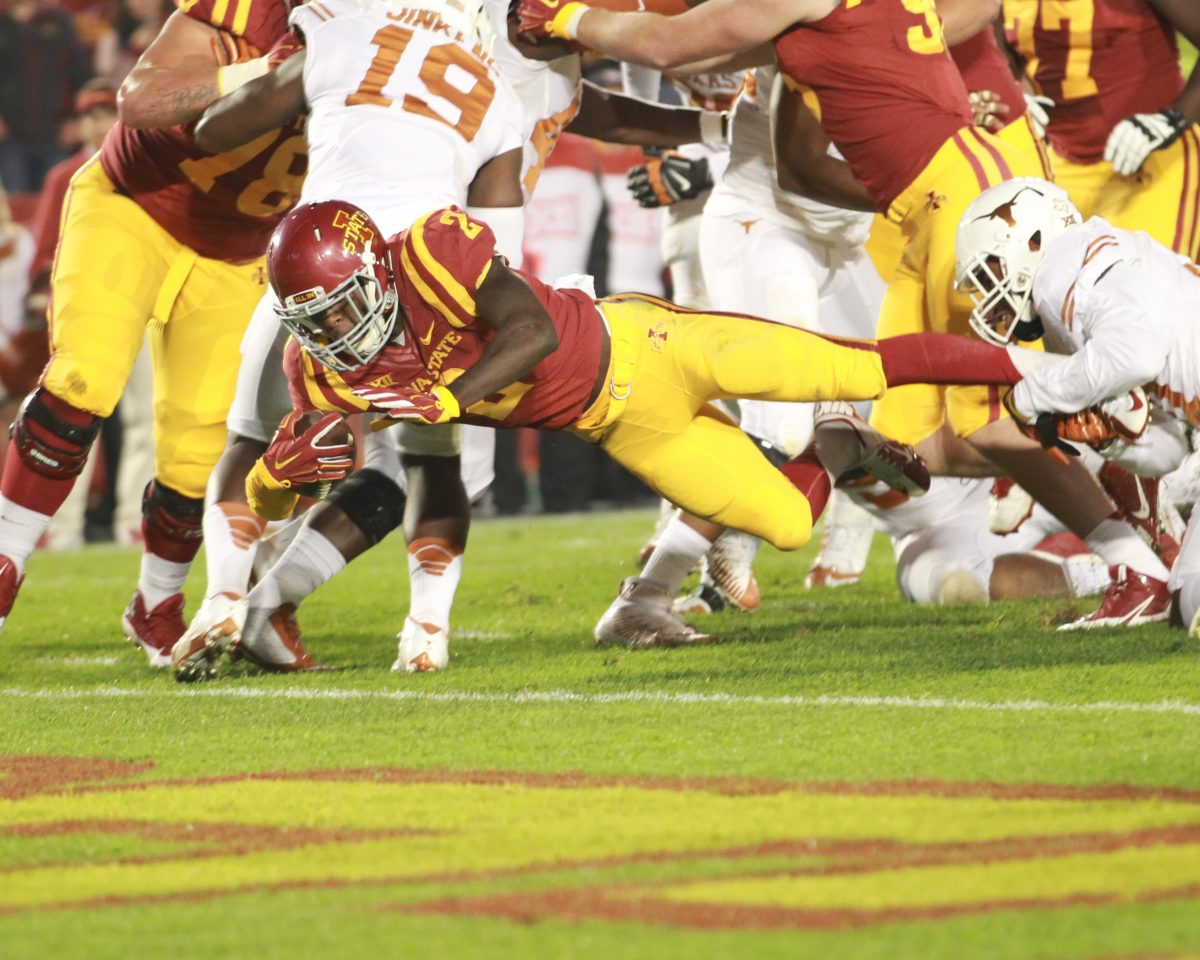 AMES — Mike Warren didn’t see the flag that would negate a possible 60-yard touchdown run in Saturday’s 24-0 win over Texas.

Instead, Iowa State’s ultra-productive redshirt freshman running back fastened his gaze on the goal line and attacked it, hard.

“The Catapult (performance tracking) system that we have, on the touchdown that got called back, he hit 22-miles-per hour on that run,” Cyclones coach Paul Rhoads said. “That was late in the game after he’d amassed a lot of carries.”

How fast is that for a college running back?

“I definitely think this last win was a complete 180 towards our season,” said Warren, who dinged up the Longhorns’ stout rush defense for 157 yards on 32 carries, despite the long one being called back. “I think we’re going to keep on rolling from here on.”

Notice how Warren says “we.” He rarely delves deeply into first or third-person monologues.

Why? His success clearly hinges on the offensive line’s — and that group will be without one of its best, guard Daniel Burton, this week.

Burton, a native Oklahoman, went down in the Texas game after sustaining an apparent knee injury. Rhoads said by allowing more mending time this week, he could be back for the final three games of the regular season. Warren said he’ll obviously be missed, but that doesn’t lessen his confidence in the other men up front.

Everyone along that front made a concerted effort in the spring to become more physically dominant. Warren’s inevitable march past the 1,000-yard plateau only symbolizes that deeper development. The Cyclones have averaged 225 yards on the ground in the past six games — and to put that in perspective, they’d managed that many or more six times total in the previous three seasons.

“We really kind of changed our mentality a little bit and we came out and we decided that we were going to establish a very physical presence on the O-line, both on pass protection and in the running game,” left tackle Jake Campos said. “So that’s been a huge focus through the spring and then going into the fall.”

Warren’s eyes continue to lock in on the concept of constant improvement. He’s shown it throughout the season, but he improved his practice demeanor leading into Toledo, where he recorded his first of five 100-yard games in a double-overtime loss.

“Once he came to that conclusion and started getting those things accomplished on the practice field, then his game exploded,” Rhoads said. “He understands practice habits. He understands the importance of being on the practice field. He understands the importance of the guys around them and complimenting them in the process — and he can’t do it without them. A lot of upside left in his game and helping him remember that he’s got a fifth gear and that he can go sometimes instead of making some cuts in the open field, that will be a next step. Once he adds to that, he’ll become even better.”

Just don’t ask Warren to talk himself up. That 22 mph number? First he’s heard of it.

That’s one way to frame his trek from virtual anonymity to the No. 2 spot on the Big 12’s rushing chart at 119.2 yards per game in half a season.

Rhoads said in addition to Burton, defensive lineman Pierre Aka also will miss the OU game. Rhoads expects defensive end Trent Taylor to be back, however.

J.D. Waggoner — in part, Rhoads said, because of Taylor’s banged-up status — is No. 1 on the depth chart at left end. Waggoner, a sophomore, is tied for the team lead in quarterback hurries with three and despite playing limited snaps has impressed the staff.

“J.D. plays hard,” Rhoads said. “J.D. had, I think, six assists, according to our film records, on Sunday. That’s hustling.”

“He’s an outstanding football coach,” Rhoads said. “A great background on the offensive side of the ball and being short a body, we needed (him). … He was excellent in the box Saturday night, feeding down information on what was taking place as well as keeping (new offensive coordinator) Todd (Sturdy) on track with down and distance and hash and so forth. We’ll miss him this week, for sure. We grinded him for 48 hours before he got out of here, though.” 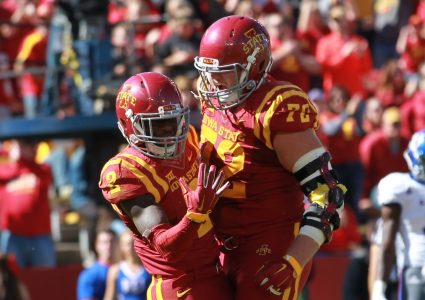