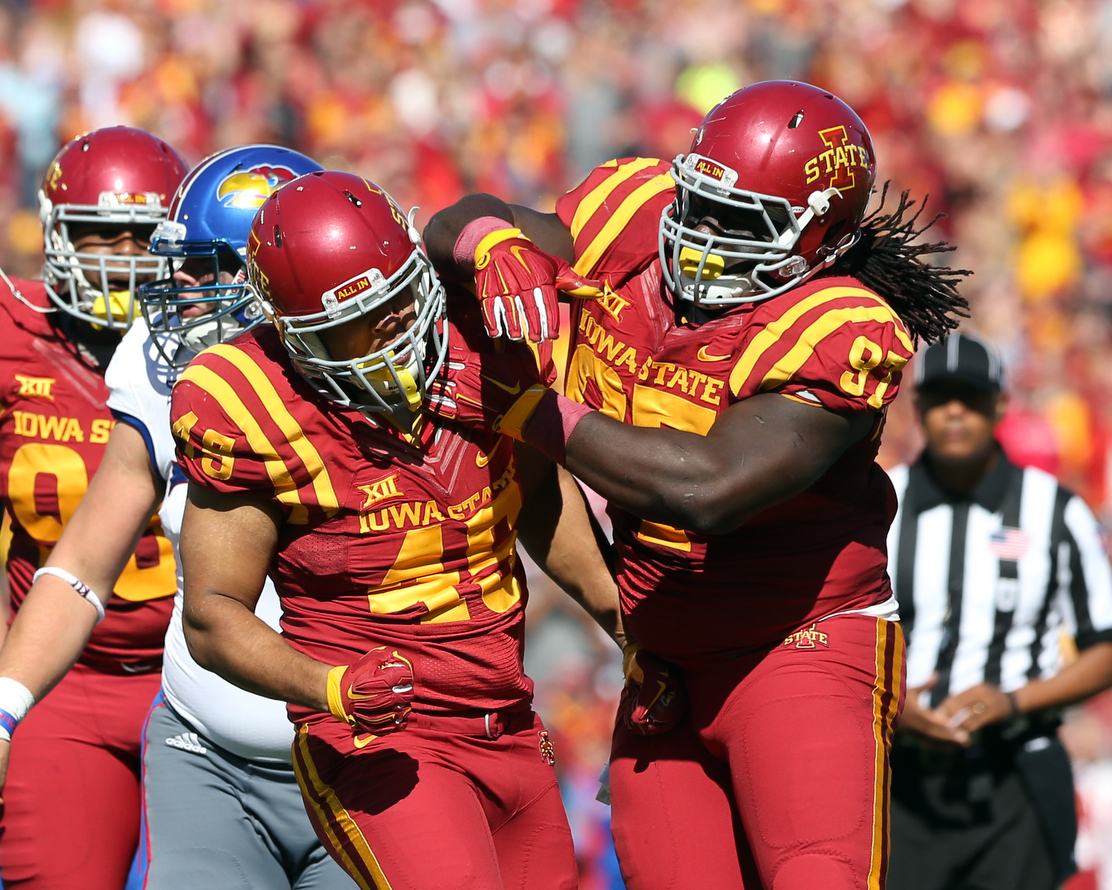 AMES — One guy tries to form the road block. Sometimes two, or even three team up and brace themselves.

Makes no difference to Demond Tucker, who’s bull-rushed the odds while making an indelible mark in his first season as an Iowa State defensive tackle.

“The biggest part of it is just running,” said Tucker, who leads Big 12 nose guards with six sacks this season entering Saturday’s 11 a.m. game at Kansas State. “If you stall out, you’re not going to make it. My biggest thing, I keep running. I get the offensive guard off my face and you can see where the ball’s coming.”

Tucker’s transformation from dominant JUCO player at Copiah-Lincoln (Miss.) Community College to consistent earth-moving force in the Big 12 ripples with brash talk, popping pads and plenty of huffing and puffing.

In a way, the high-performing, 6-0, 296-pound junior’s season of discovery mirrors that of ISU’s: There’s no quit, it’s occasionally high-octane, but it’s not been uniformly good enough to make achieving important goals possible.

That’s why Tucker and the Cyclones (3-7, 2-5) — who won’t go bowling for the third straight season — point to these final two conference games as immense opportunities for growth.

Win and a possibly unsettled upcoming 2016 season brims with promise. Lose and the long offseason of strength work could loom more as a chore than a chance to build a brighter future.

“These last two games, just want to try to help for the seniors to at least get their last two wins,” said Tucker, who struck for two sacks in last week’s near-upset of unbeaten Oklahoma State. “I’m going to do all I can. I’m going to step it up a notch for my team to help them get these last two victories.”

Pride runs deep. Pain remains. What ifs abound in losing seasons — but one such proposition hinging on the results at Manhattan, then Morgantown, W.V., actually would allow the Cyclones to look forward ambitiously, not backward with regret.

“We’ve got an opportunity to finish with four conference wins,” said ISU coach Paul Rhoads, who will face his third bowl-less season after reaching postseason play three times in his first four years on the job. “It would be the first time the Iowa State football program has seen four conference wins since 2005. It would also be the second-most conference wins in the history of Iowa State being in the Big 12. If we accomplish that and some other things fall right, we have an opportunity to finish in fifth place in the Big 12 Conference. It would be the highest (ISU) finish since this league has gone to 10 teams and a round-robin format. Great accomplishment for our football program.”

Tucker’s rookie season has been replete with great feats. His disruptive push at the point of attack has helped senior defensive end Dale Pierson tie the single-season school sacks record with 8.5.

“You never know what (Tucker’s) going to give you,” said star safety Kamari Cotton-Moya, who could be a game-time decision Saturday after missing the past four games with a hamstring injury. “You never know. He may not be the biggest guy, but I’m sure all the centers in the Big 12 don’t like blocking him. … I know he gives them hell and that dude’s gonna be a future draft pick in the NFL.”

First things first. Tucker’s goals merge with the team’s. Upon joining ISU’s program, he vowed to “shock the Big 12.” That hasn’t happened, but he wasn’t far off. Tucker’s 13 tackles for loss also leads Big 12 nose guards. His motor’s operating more efficiently. His fuel tank has expanded its capacity.

““He’s finally getting in shape a little bit,” Cyclones defensive coordinator Wally Burnham said. “That’s the start, where he can player harder and longer. But he’s gotten quicker as he’s gotten stronger. You know, he was a junior college kid that came in out of shape. Had some natural strength but not any football strength in his hands and things like that, so he’s gotten better in a lot of areas.”

Tucker nodded when asked about the conditioning. The real “shock” came to his system — realizing how hard it is to excel in one of the nation’s top conferences from series to series, and quarter one to quarter four.

“Coach (is) right,” Tucker said. “The way I play, I play myself to exhaustion. The three and four plays I was in, I would have to come out and get a breather. But now, I can go a whole stretch, a whole drive and be ready for the next drive. It’s really helping me condition myself more and I’m going to hit it hard this (offseason), so when the next season come around I’m not going to have to worry about it.”

There’s no hand-wringing left for this season. It is what it is. Going out strong is the only option left on the training table. Making a furious finish an actual foundation — unlike in 2013, when ISU ended with two late wins that failed to rekindle success in 2014 — is job No. 1.

“Just trying to win these last two games,” Tucker said, “and prepare for next year.”