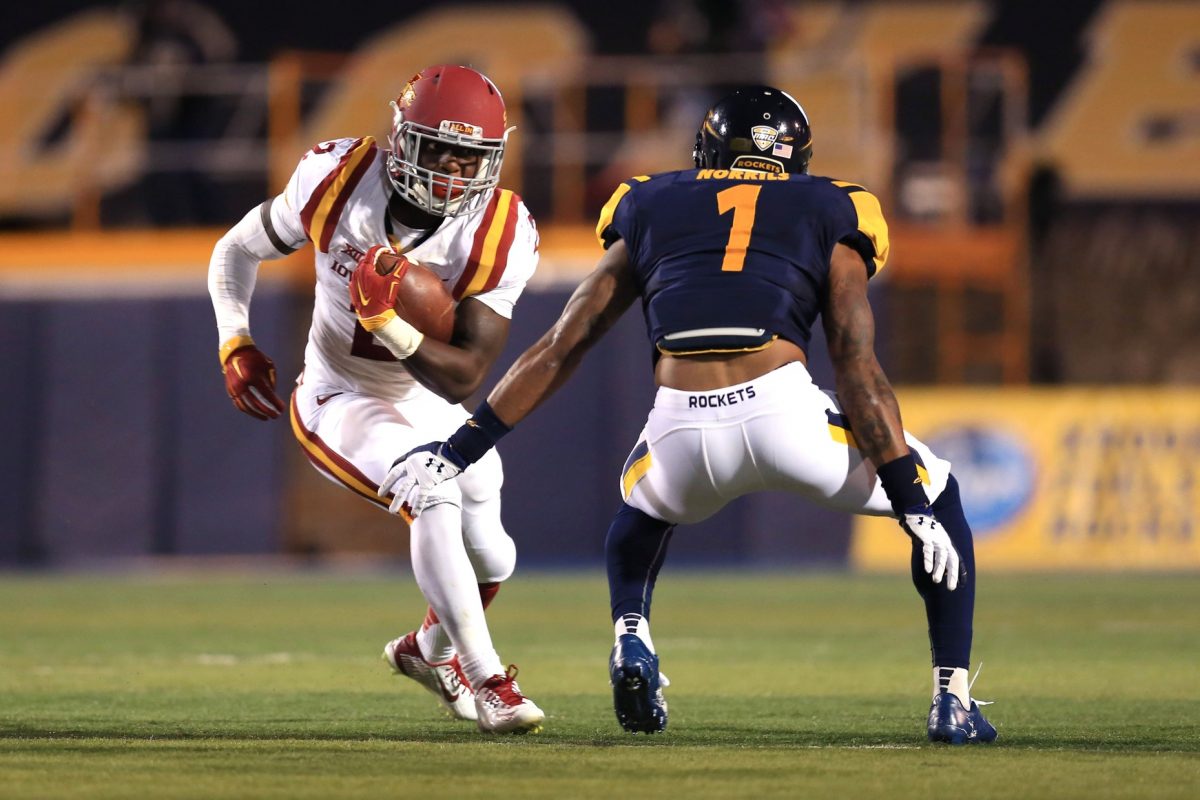 The Lawton, Okla. standout liked what he heard and glanced at his similarly impressed parents, Curtis and Barbara.

And that’s when the future Iowa State tailback knew wherever Lou Ayeni went, he would almost certainly follow.

“It seemed like it was destined for him and my parents to meet,” said Warren, who hopes to record a second straight 100-plus yard rushing day for the Cyclones as they open Big 12 play at 11 a.m. Saturday against Kansas at Jack Trice Stadium. “I felt comfortable around him and what he had going on so when he came to Iowa State I felt comfortable going with him to Iowa State, too.”

Ayeni joined the ISU offensive staff in January of 2014. His bond with Warren had already been deeply forged, so Toledo was becoming his school of choice.

Then Tommy Mister, another running back the Cyclones had apparently landed chose to go to Indiana instead.

Mister’s now looking to transfer somewhere else. Warren’s an emerging star in Ames for a running attack that hasn’t totaled 200 or more yards in back-to-back games since the end of the 2013 season — when Warren, a redshirt freshman, was cementing his decision and Ayeni was making the move to ISU.

Funny how things work out.

“My parents have never told me wrong,” said Warren, whose breakout 21-carry, 126-yard performance two weeks ago came, ironically enough, against Toledo. “I just listen to them because they’re right all the time. They know how this works.”

So does Warren. During his redshirt season, we all heard rave reviews from behind the scenes. By the lead-up to week three, Cyclones coach Paul Rhoads declared Warren ready for prime time and the former scout team star delivered ground-based fireworks despite the 30-23 double overtime loss.

“The crazy thing about it is people haven’t really seen what he can do,” said ISU linebacker Jordan Harris, who’s second on the team in tackles with 21. “That was just a little glimpse of it, but he can do way more then that and I’ve done seen it from attacking him in practice to chasing after him in practice. I done seen he can do way more than that and we’ll see it as the season goes on.”

He’ll have to — along with a supporting cast of Tyler Brown, Joshua Thomas and wild card speedster Trever Ryen.

It’s likely the Cyclones (1-2) will be able to carve up the Jayhawks’ undersized defense for 200-plus yards on Saturday. Kansas (0-3) ranks 120th in rush defense, allowing 254.3 yards per game, but ISU’s long-awaited revival in the running game can’t be a one-hit wonder.

“I don’t really feed into hype or anything, but there’s a lot more that people probably expect out of me,” Warren said. “And I’m OK with that. I have to push myself as well. I think I can live up to the expectation.”

Warren exudes quiet confidence. Rhoads said it must spread throughout the team despite the 1-2 start and the rugged nine-game conference slate ahead.

“Mike Warren had a great week of preparation leading up into that game,” Rhoads said. “That preparation showed in how he performed and last week I thought he was a more confident Mike Warren (and) making more people miss. He showed better vision. Confidence comes with success. Mike Warren went out and had some success along with the rest of the offense in the running game and it showed the very next week on the practice field. Our football team needs that. Our football team needs to go discover confidence by playing our way to that level.”

In other words, it’s about doing, not saying. Laying the groundwork, eliminating doubt.

“Patience is probably one of my biggest assets,” said Warren, who entering his senior season of high school was clocked at least twice at 4.3 seconds on the 40-yard dash. “I don’t like to rush things. I like to see how things play out before they happen. So when it finally happens, then I’m not surprised or anything because, you know you’ve just been waiting for it; just expecting it.”

Such is the nature of “breakthroughs.”

They don’t occur overnight. Warren said during the Toledo week he spent at least two hours a day reviewing video after practice with Ayeni. He also performed extra footwork and catching drills.

The labor continues now as he seeks to take another step up the performance ladder with patience as his prime virtue, even though he runs at a breakneck pace.

“I think the patience piece is one thing that I really noticed last week when I talked about (him becoming) a more confident guy,” Rhoads said. “He wasn’t making different cuts, but he was making them at a better time as he took defenders one more half step, or one more body lean directionally and then was able to make that split-second cut. And then the physical tools that he’s gifted with — that he’s always had — showed up in a different way. He’s just a redshirt freshman, now. He’s going to do nothing but learn and grow and get better and better as we go.”

*** Rhoads said the team will be at essentially full strength of Saturday’s game against the Jayhawks.

“We’re excited about that and what it gives our football team,” Rhoads added.

Let’s not forget high-impact nose guard Demond Tucker, either. He’s been playing banged up since the season-opening win over Northern Iowa. I asked Harris how his friend responded to the off week.

“He’ll be ready to roll,” Harris said. “He’ll be a different guy. So our defense will look real good this weekend. I’m pretty confident about it.”

*** Iowa State opened as a two-touchdown favorite over Kansas and as of Monday afternoon that number had ballooned to 15.5 points. The Cyclones said being favored means nothing.

“It’s going to be a tough game,” Warren said. “They’re going to give us battle because they want to win, too. This game’s going to be important for us to start off the big 12 right.”