AMES — He clenched his fist, then covered it with his huge, opposing hand.

“It’s just like a rock,” McKay said about a half-hour after the No. 17 Cyclones turned Hilton Coliseum into a quarry and struck magical gold that turned a 21-point second-half deficit into a 77-70 Big 12 win. “Can’t nothing stop us. We’re all one and can’t nothing break a rock. That’s how I feel. We stayed together and nothing broke us, through thick and thin and we came out with the win. Best game — I’m so happy to be a part of it.”

That goes for him, his teammates and about 14,384 frenzied fans who assembled for another Hilton sellout and watched, slack-jawed, as ISU matched its largest comeback win in program history (1999, vs. Western Illinois in overtime).

“We can score with anybody, but we really needed to lock in on defense and I think that’s really what we did,” said Cyclones forward Georges Niang, who scored five straight points to ignite a 22-0 second-half run that spanned less than six head-spinning minutes. “We grinded out stops and really pushed the ball in transition. Then, Hilton magic just took over.”

Niang scored 20 of his team-high 23 points in the second half. Point guard Monté Morris poured in 17 of his 19 points in the final 20 minutes, while taking a second, sharp shot to the head in as many games.

“We actually started seeing the ball (go) in the rim,” Morris said. “Early on, we got down on ourselves and we weren’t playing Cyclone basketball … We saw a couple baskets go in and it shifted on the defensive end.”

The 6-9 presence in the paint — and, now, the locker room — etched out his second straight double-double with 14 points and 12 rebounds, all while preventing a cold-shooting start and 10 first-half turnovers from turning into an emotional avalanche and possible third consecutive defeat.

“He was great for us,” said Niang, who added eight rebounds and four assists. “I would say he’s really the anchor. Really preaching to us in the huddle that we can’t be broken. We need to stick together and we’re like a (rock) and we can’t be broken. Credit to him. He really stepped up in the leadership category tonight and really pulled us together and really willed us to the finish line mentally.”

McKay — who scored 10 of those 18 points — led vocally (and with his visual aid) at halftime, exhorting his teammates to stay together. To continue to believe.

“I told them, ‘We’ve seen worse,’” McKay said. “‘We’ve been through worse in life, there’s people going through worse in life. If this is the hardest thing we go through, then we’re blessed.’ I knew we could come back and that’s what we did. We stayed together. I told them if we could come out and play a game within a game. Try to outscore them by five every four minutes. Just play a game within a game and we’ll see where it takes us at the end.”

A long way from the beginning, that’s where. A pole-to-pole shift.

“They were just getting whatever they wanted, getting all the 50-50 balls,” Niang said. “It just really looked like they were punkin’ us in our own house on senior night. We really couldn’t let our guys: Danny (Edozie), Bryce (Dejean-Jones) and Dustin (Hogue) go out like that.”

ISU chipped to within 15, at 43-28 on Naz Long’s lone 3-pointer, but Oklahoma built its lead back to 20 less than a minute and a half later.

McKay kept thinking about his “favorite teammate,” Dustin Hogue, as the Sooners (20-9, 11-6) seemed to regain momentum. Hogue’s been his teammate — off and on — since they played at Indian Hills Community College together.

“That’s an all-time memory for me,” said McKay, who matched Niang with three offensive rebounds. “I got to see my favorite teammate, Dustin, off with a win in that fashion. It’s good to win by 40 or 30 points, but I’d rather come back. It just showed how together we were.”

It revealed that the bedrock of "brotherhood" remains in tact — even if it quaked for almost 25 of 40 minutes.

Until Oklahoma’s Isaiah Cousins drew a technical for taunting the Cyclones’ bench after a Ryan Spangler block with 14:55 left.

Until the true meaning of McKay’s strong symbol showed itself and rock turned to titanium.

“We were defending, we were out there pressuring and guys who were supposed to be sitting in gaps were in gaps,” ISU coach Fred Hoiberg said. “Guys who were supposed to be helping on the post were in there digging, making them kick it out and then the urgency on our closeouts was outstanding. I thought it was really a great mental half. We needed that, we needed it in a bad way. We were obviously a team struggling and reeling a little bit. After two losses you get one day to prepare and you wonder how your guys are going to come out and responded. We didn’t respond great obviously, but they sure turned it around and hopefully this is what we need to get our confidence back to the point where we can get some momentum going into the tournament.”

Or tournaments — the Big 12 and the NCAA.

It’s March, a time when clenched fists are bumped, or dropped to the side. Hands hold fast, or stray apart. Rocks are piled into mountains, or tumble and scatter.

“We can play with anybody,” Niang said. “If we’re down, we’re never out. I think this is a good time to really turn it up. March is the beginning of great things, so I think this is great timing.” 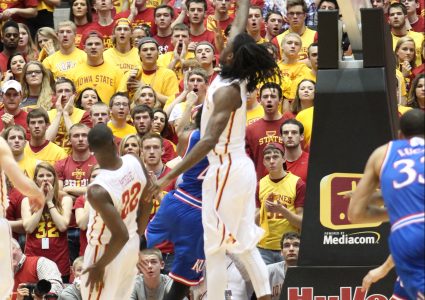