AMES — One must delve only eight words into Iowa State’s latest game notes to find the term “road woes.”

It’s been one of those seasons away from Hilton Coliseum — but if it’s any solace, the 14th-ranked Cyclones aren’t the only Big 12 team struggling outside of their home arena.

Just one conference team (No. 8 and 10-time defending champ Kansas) owns a better than .500 mark on the road in league play, and the Jayhawks are only 4-3 when not playing at Allen Fieldhouse.

Monday’s 62-61 Kansas loss at No. 23 West Virginia proved two things: (A) the Big 12 is the best conference in America, and (B) the term “road woes” can be broadly spread among the 10 teams that populate the league standings.

“It’s about all five guys staying together,” ISU coach Fred Hoiberg said of winning games on the road, which his team (18-6, 8-4) must try to do again at 8 p.m. Wednesday against No. 22 Oklahoma State. “You’re going to hit adversity. There’s no doubt about that at some point during the game. How are you going to respond? What are you going to do to get through that adversity? We’ve talked about it this last week. Hopefully we give ourselves a chance. That’s all you want when you go on the road against a tough team like we’re going to face in these next two (the Cyclones also play at Texas on Saturday). You want to give yourselves an opportunity at the end.”

Even then — as Juwan Staten’s swift spin move Monday at Morgantown attests — apparent road wins can turn to teeth-gnashing losses in the blink of an eye.

ISU’s lone road victory weighted against four losses away from home came in that same arena.

How’d the Cyclones do it?

By playing unselfish basketball, remaining tight-knit in the face of foul-fueled adversity and shooting 50 percent from the field.

Road warrior Abdel Nader scored a career-high 19 points off the bench — one game after playing just eight minutes in ISU’s narrow 63-61 win over the Cowboys at Hilton.

The Cyclones have lost four straight road games since, including a hair-pulling 78-73 setback at lowly Texas Tech.

“It’s no secret that we haven’t pulled off a couple road wins like we’ve wanted to,” said Long, who played a key role in beating Oklahoma State twice last season. “It’s something that we’re very motivated on. … We just want to get road wins. We have two huge opportunities now to flip the script.”

Speaking about that script, it’s included a bevy of road losses the past couple of years.

The Cyclones went 3-6 on the road in league play in both 2012-13 and 2013-14. Last season, ISU’s Long-led triple-overtime win at Stillwater snapped a three-game road skid.

“It was a big confidence builder for our team to as well,” Hoiberg said. “to go down there and get that win against a great team, with Marcus Smart in the lineup right before he was out in a little stretch, but that was an important win for our team because it showed us we can win on the road. It showed us we can come back and win when the odds are stacked up against you.  That’s important for your team to do.”

The Cyclones have done that just once this conference season. To close strong and potentially challenge the Jayhawks for the regular season title, they’ll need to do it at least twice more and probably three times, making this matchup with Le’Bryan Nash’s and Phil Forte’s Cowboys that much more pivotal.

“When you’re at home it’s easy to come together because you have the crowd behind you,” ISU forward Georges Niang said. “One day at a time we’re getting to where on the road we’re going to come together and pull off some road wins.”

THe Cyclones have a 40 percent chance of winning at Stillwater, according to KenPom.com. Projected score: Cowboys 75, ISU 72. Buckle up. 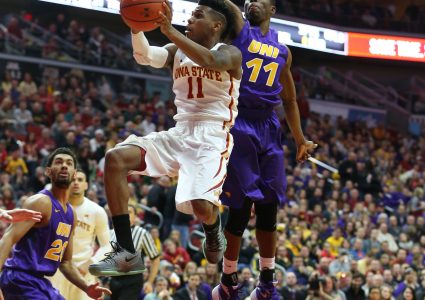 Monté Morris seeks to reboot his “hit list” on the road 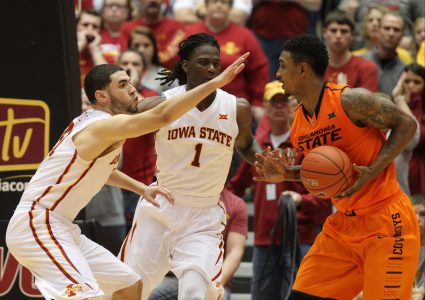