Iowa State’s sharpshooting guard Naz Long’s been forced to take it easy lately, thanks to a hip pointer injury he sustained nine days ago in a 75-38 rout of Texas Tech.

It’s slowly been healing, but the lingering pain limited him to a season-low 12 minutes in Saturday’s 79-59 win over No. 23 West Virginia.

“I’ve just been wrestling with it and whatnot, but we’ve been doing treatment on it every day,” said Long, who hopes to reprise his role of “Cowboy killer” in Wednesday’s 8 p.m. Big 12 game between the 14th-ranked Cyclones and No. 22 Oklahoma State at Stillwater. “I came in early (Monday) morning to get a couple things done and I think I’ll be fine on Wednesday.”

He also hit the two free throws that put ISU ahead for good in a grueling 98-97 triple-overtime triumph that was the team’s first at Oklahoma State since 1988.

“That was a crazy, crazy game, obviously,” said Cyclone coach Fred Hoiberg, who had previously never won in Stillwater as a coach or a player. “And to be able to fight back after things didn’t look so good, that’s what you have to do, especially when you go on the road. You have to find a way to make plays when things maybe are stacked up against you.”

Long — who added a regulation buzzer-beating 3 against the Cowboys in Ames last season that ultimately led to an 85-81 overtime win — said treatments he’s sought since the last road loss at No. 17 Oklahoma continue to ease the pain that’s built up.

And Hoiberg’s convinced Long will take all the necessary steps to enhance the likelihood of his availability by Wednesday, though he was held out of live drills on Monday.

“Naz is as tough a kid as I’ve been around, so if there’s anything going on, if he has any opportunity to get out there, I know he will,” Hoiberg said.

Speaking of opportunity, Long’s difficulties on Saturday were cancelled out by highly productive bench.

He’s trying to develop that lack of a conscience in shooting the basketball that’s made Long such a clutch threat from the perimeter.

“It’s tough for me, because as a basketball player I’ve always had a conscience — just trying to make the right play,” Thomas said. “But sometimes, as a shooter especially, you can’t think out there. If you have a little open spot you have to let it do. I’m trying to adopt that mentality but it’s just been a tough process.”

“Naz is a tough dude,” Thomas said when asked about whether he thinks Long will be able to play. “I don’t anticipate him missing any games or any time because of his hip. I know it’s  a really tough situation for him right now, but he’ll get through it. Like I said, he’s a tough dude. All he wants to do is win, so he’ll be out there.”

Whether he can stay out there is the only remaining question.

“It’s all about just getting the pain down, getting as close to 100 (percent) as possible and just staying warm on it,” Long said. “I don’t feel like it’s messing with my shot or anything like that, but if it’s acting up too much at the game, who knows, but we’ve got guys. I’m not even worried about it.” 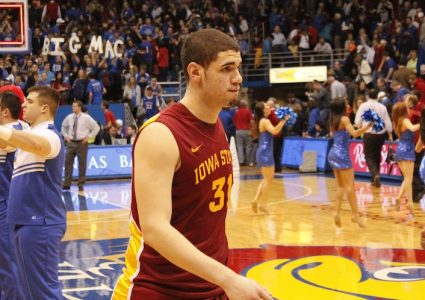 Cyclones slip in overtime to No. 6 Kansas