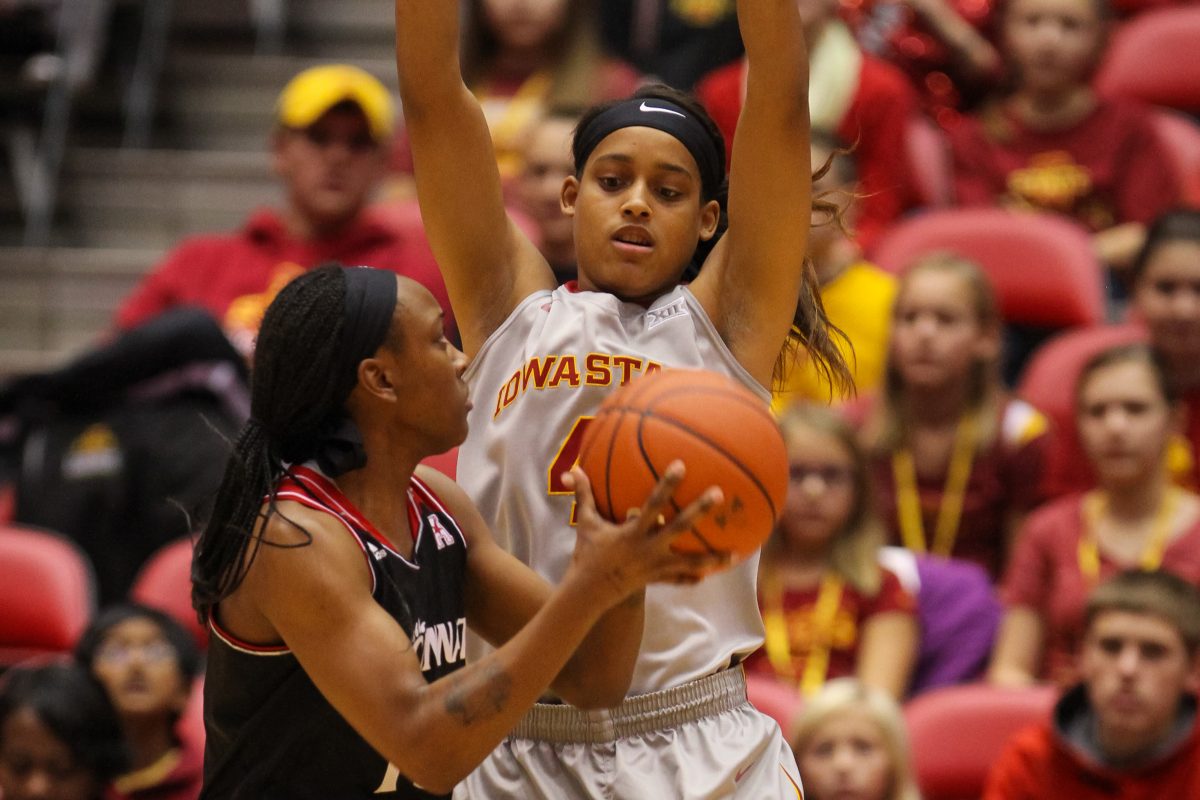 AMES — With just over two minutes left in the first half of the Iowa State women’s basketball team’s game with TCU (11-6, 3-3 Big 12) on Wednesday, senior point guard Nikki Moody fell to floor and grabbed her left ankle.

Moody played only 15 minutes the last time the two teams played, a game won by the Horned Frogs, who erased a 24-point second half deficit to win 86-84.The Cyclones turned the basketball over 21 times and desperately missed their point guard after she fouled out with six minutes play.

On Wednesday, there was no foul trouble for Moody and she didn’t let the sprained ankle get in her way.

Moody scored 20 points last Saturday against Kansas State in a 79-59 win after being removed from the starting lineup. According to Fennelly, her being able to come back strong after losing her spot in the lineup and her injury just further shows how tough she is.

“It says a lot about your toughness, it says a lot about being a senior, you know you only have seven more games left at Hilton,” Fennelly said. “When you’re a senior and you see people get hurt, you see your career ending, especially, you find a way to get through it. If physically and the doctors say you can go.”

While her ankle hurts now, don’t expect Moody to miss the Cyclones’ next game in Austin against the No. 9 Texas Longhorns on Sunday – or any time at all for that matter.

“It can’t keep me out,” Moody said. “I’m still going to play regardless. If it hurts, it hurts. I’ve just got to get treatment on it and keep pushing.”

While Moody was standing out in the backcourt, freshman center Bryanna Fernstrom came off the bench to score a team-high 18 points and also grabbed six rebounds, despite sitting out the past two days with the flu.

“I thought she was really good,” Fennelly said. “Same amount of minutes that she usually gets in that 20 to 22 range, but very, very productive. I thought was a big part of our team winning tonight.”

Was it a revenge game for the Cyclones after the way they lost when the teams two weeks ago in Fort Worth?

“We really didn’t need extra motivation for this game,” Moody said. “Down there it was a tough loss for us. We should’ve won. Today we was just trying to get that win.”

*** Bill Fennelly and TCU head coach Raegan Pebley shared a few words after the game was over. According to Fennelly, it stemmed from something that happened when the two teams played two weeks ago.

“She had a question about something that happened at their game,” Fennelly said. “So I had to set her straight.”

What was the question?

“That was between me and her,” Fennelly said. “Some people just don’t get it. I’ll just leave it at that.”

*** Johnson also tied a season-high with 13 rebounds to pick up her sixth double-double of the year.

*** Iowa State extended their NCAA-record streak to 629 consecutive games with a 3-pointer in the win.