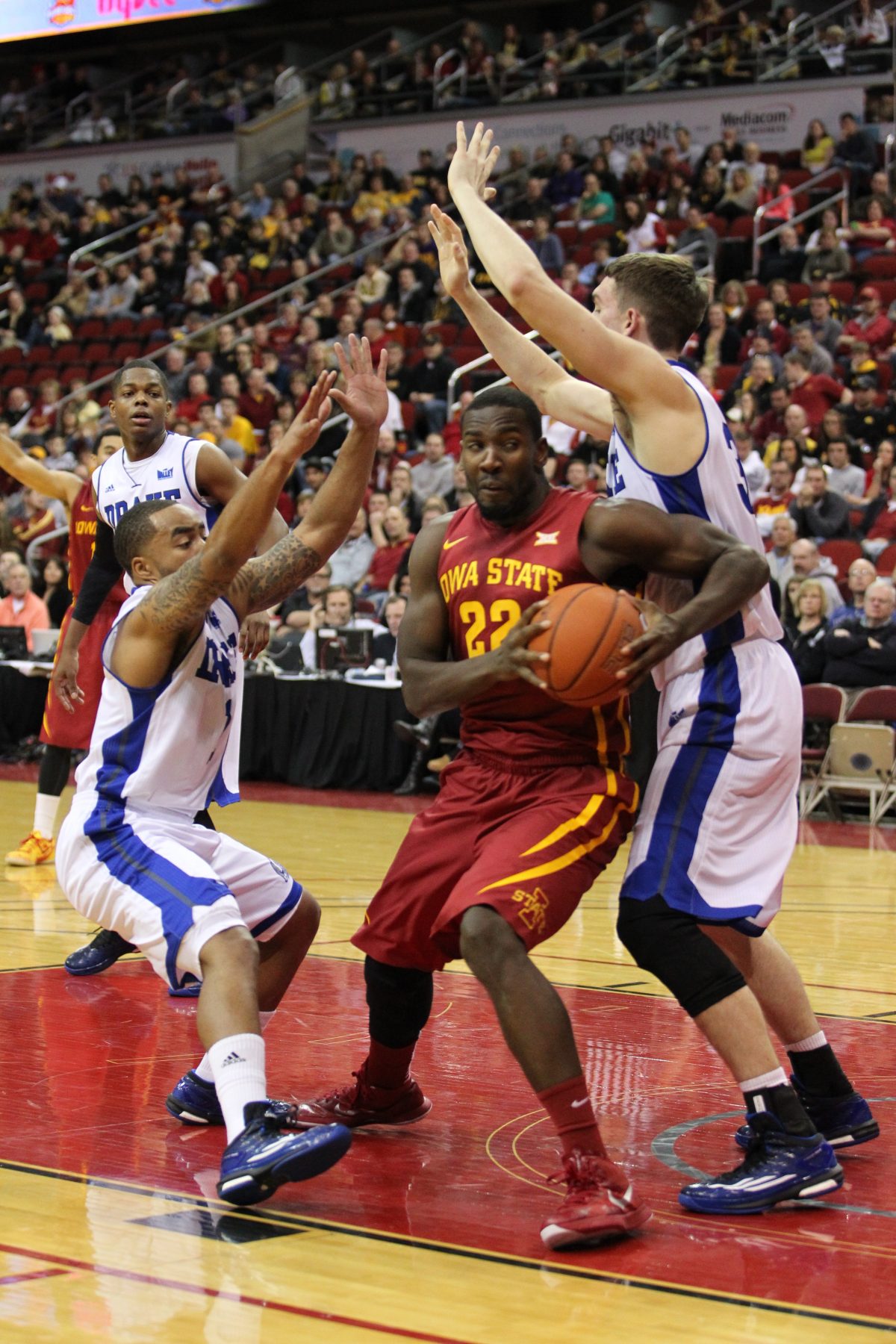 Simply put: The Cyclones (9-1) were the Cyclones, sharing the ball with relish and drawing deeply from the bench throughout against the overmatched Bulldogs (2-9).

“I just go into each game and try to coach by feel and who’s got it going out there,” said ISU coach Fred Hoiberg, who rotated reserve freshman point guard Clayton Custer in with the first team in the first half. “Foul trouble will obviously play a part, who gets tired at certain times? But like I told those guys, they can go out and play to exhaustion because we’ve got other guys we can put in the game for them and hopefully they do the same thing and we can continue those rotations.”

The first eight Cyclones to play all scored at least one basket in the first 15 minutes.

Stars Niang and Dejean-Jones could mostly take it easy — they combined for 15 points in 38 minutes. Walk-ons Kourtlin Jackson and Daniel Stensland enjoyed more than a few seconds of court time after ISU’s lead swelled to 35 points. Even little-used big man Georgios Tsampouris played seven minutes and knocked down a 3-pointer off an assist from Stensland.

“(At times) we have to go into our bench and those guys know that,” said junior guard Naz Long, who got in some work on the point as well while scoring a team-high 13 points. “Everybody’s got to be prepared for their moment.”

It was a more-the-merrier night as everyone but Jackson and Stensland scored. Big man Jameel McKay made his ISU debut and chipped in eight points and five rebounds in 13 minutes.

“I loved our rhythm,” Hoiberg said. “We got up 16 and then really extended that early in the second half. We wanted to control tempo tonight and I thought we did a good job of it.”

THE T: Long drew a whistle for a technical foul after jawing with a Drake player after a made layup. He kept talking, so Hoiberg forcefully pulled him out of the game and they had a chat. All’s good, both said after the game.

“Just let my emotions get a little ahead of me,” said Long, who drained three of the Cyclones’ 12 3-pointers. “I slipped up. Coach put me in my place for that and I was just looking to respond on that. I’m a high character guy. I take pride in having a positive image so doing something like that is completely out of character.”

“He’s such a passionate kid,” Hoiberg said. “He got T’d up and he deserved it. He deserved the T. But he calmed him down. (We) had a nice talk with him and I thought he went back in there with the right mentality and played great minutes after that.”

CUSTER’S ROLE: When the first 3-pointer falls, comfort sets in. That’s how it was for Custer, who drained his first of two 3s while running with the ones in the first half. The freshman point guard finished with six points and three assists in 14 minutes.

“That’s big time,” said Morris, a sophomore who went 5-for-6 from the field. “It’s good to see Clayton getting his feel. At first he was kind of just overwhelmed a little bit like I was last year. … He’s getting better.”

Hoiberg said Custer’s first-half minutes in particular will prove valuable down the road.

“He hit a great shot from the right wing on his first 3 and that shows how confident the kid is — to go out there and shoot without any hesitation,” Hoiberg said.

Custer said he’s increasingly looking to push the pace at all times.

“I was just saying, ‘Be aggressive,’” he said. “I was just trying to play today and not worry about stuff too much. Just hoop.”