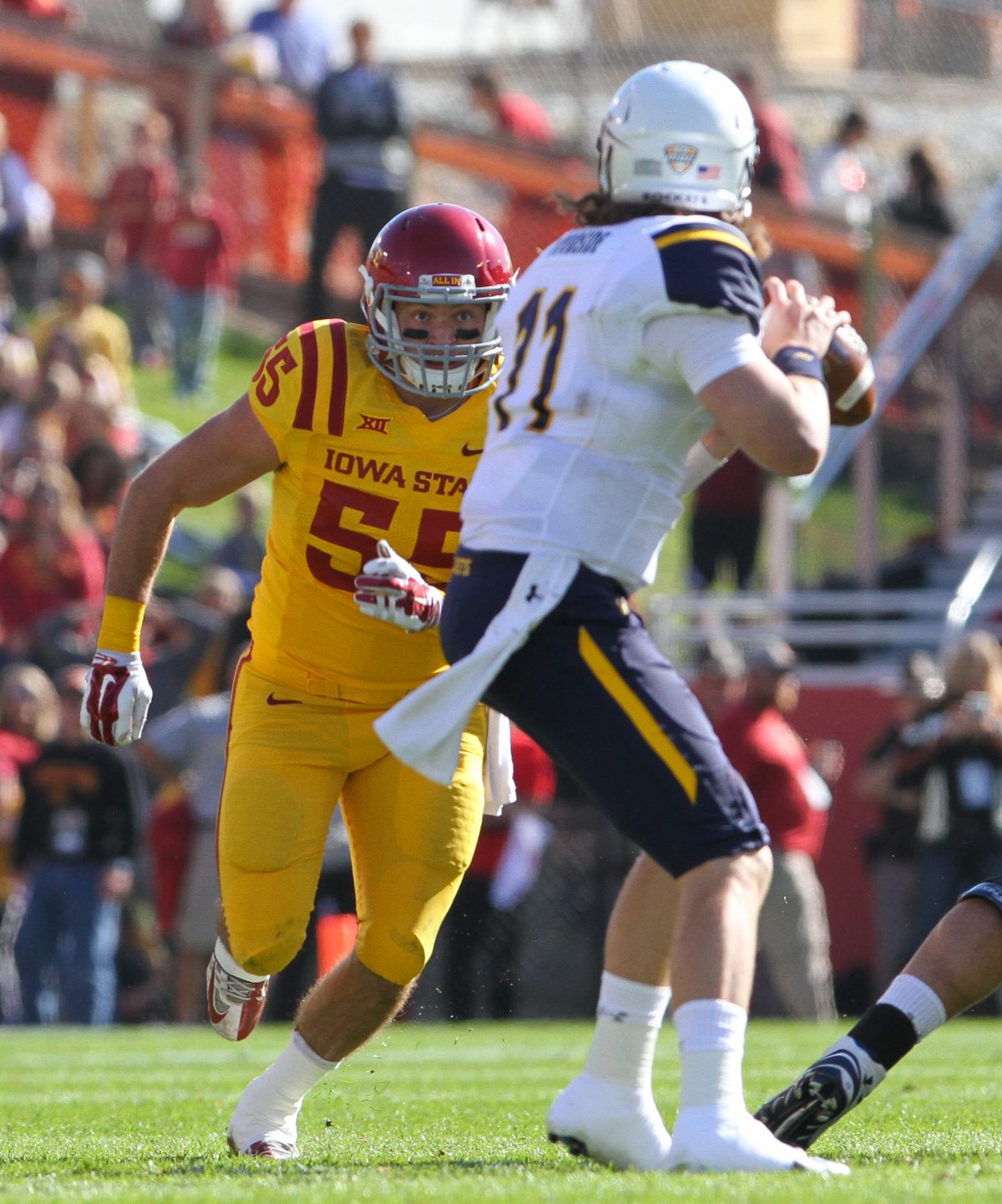 “He will not be available,” Cyclone coach Paul Rhoads said in Monday’s news conference.

Miller — who still ranks sixth in the Big 12 in tackles with 68 despite missing all but two plays in last weekend’s 59-14 blowout loss to Oklahoma — sustained a severe right knee injury while being blocked.

Rhoads said results of a late afternoon MRI would determine if the senior leader from Brooklyn will become ISU’s ninth player to see his season end too soon because of injury.

“They can’t get a good feel for this one,” Rhoads said. “They believe it’s an MCL, but they don’t know what else. It’s ugly on tape. I know that. It’s a clean play. It’s a legal block and it’s a clean play. I’ve got not problem with what happened on the play. It’s just a bad result of a botched snap and that caught (Miller’s) eyes and his eyes didn’t go where they should have gone to help defeat the block.”

So down Miller went — and up he went gingerly on a pair of crutches to help coach up his green backups, Kane Seeley and Alton Meeks.

“Jevohn’s going to watch film with them and help them out,” said defensive end Cory Morrissey, who as Miller’s roommate has had to help him up and down stairs as he grows accustomed to being hobbled. “They’re going to have to get in and talk to coach (Wally) Burnham and coach Rhoads a lot if we’re going to have success on defense.”

Seeley, a sophomore, played the bulk of the game at Miller’s vacated MIKE linebacker spot and notched nine total tackles (two solo). Meeks, a redshirt freshman, played fewer snaps and totaled one tackle, but is considered to be even with Seeley on the depth chart.

“(They’re) both taking reps with that No. 1 unit and how that breaks down we’ll see by how they practice this week,” Rhoads said. “But either one of those guys have very little game experience.”

Miller had started 14 consecutive games and turned himself into a leader behind the scenes as well as on the stat sheet.

“I think that’s a credit to his whole attitude this season,” said WILL linebacker Luke Knott, who will try to offer on-field help to Seeley and Meeks. “He definitely wants to help this team.”

Rhoads said Knott can provide assistance to Seeley and Meeks, but as a sophomore is still perfecting the fine points of linebacker play.

Bundrage was the wide receiving corps’ top big-play threat. Dagel had started 15 games at offensive tackle. All the others were coming into their own as productive backups or special teams players.

“It just wears on you,” center Tom Farniok said of battling an unusually deep rash of key injuries the second straight season. “It’s annoying. But it’s part of football. You have to adjust.”

There’s at least some good news to digest on the often-depressing injury front.

Top cornerback Nigel Tribune, who didn’t play Saturday because of a late-week groin injury, and developing defensive tackle Robby Garcia, who’s been banged up with various maladies, are expected to be back on the field in Lawrence, as is fifth-year senior nose guard Brandon Jensen.

Tribune’s listed as No. 2 on the depth chart to Ken Lynn, but that’s a precautionary placement, Rhoads said.

“We’ve got to see if he’s back healthy and ready to go,” Rhoads said.

MORE INJURY NEWS: Rhoads said quarterback Sam Richardson banged up his shoulder late in the Oklahoma game but will be fine for Saturday. Rhoads added the Devlyn Cousin’s hurt elbow has healed enough that they would try to practice him lightly on Tuesday.

“We’ll see how he responds,” Rhoads said. “If he was a baseball player he wouldn’t be pitching for a long time, but we can brace him as a football player and see if we can’t get something out of him yet this season.”

RHOADS’ TRIP: Since Monday’s not a practice day, Rhoads can carpool with his wife, Vickie, to son Wyatt’s high school football playoff game tonight at Dallas Center-Grimes. That wasn’t the case last Wednesday, when Rhoads did a quick change after practice to embark on a long drive to Humboldt to cheer on the Gilbert Tigers.

“We were outdoors practicing,” Rhoads said. “I did have my Gilbert fleece on under my Iowa State hoodie and made a beeline from the practice field to the pickup. Didn’t squeal tires, but I was out of here pretty fast and actually got to Humboldt with 15 minutes to spare. Tonight will be easy. We’ll roll out of here about 5 o’clock. We’re partial to getting good seats in the top row, so we’ll get there in time to do that.”

Usually, Vickie must spread out to save prime viewing and cheering spots.

“I’m the seat person,” she said. Not Monday — and Wyatt’s rarely a “seat person.”

“Wyatt didn’t come off the field the last game: offense, defense and special teams,” said Rhoads, who followed a similar fast-paced post-practice schedule while son and Cyclone walk-on, Jake, played for the Tigers. “That’s sort of neat to see too.” 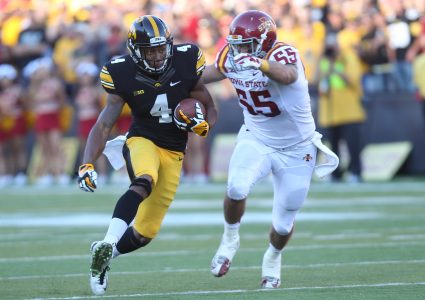 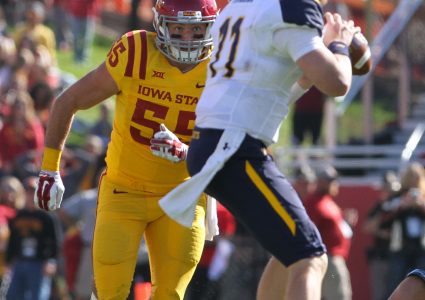