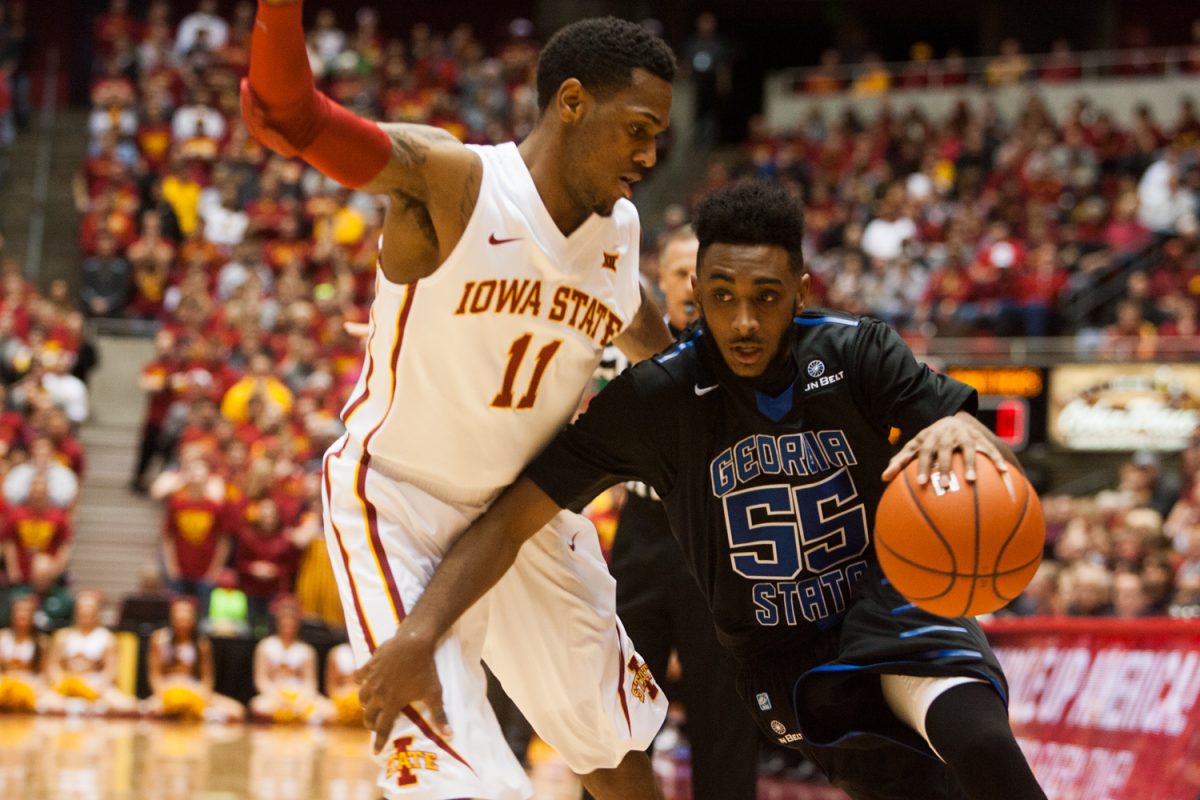 AMES — He finished strong, in deep. He drained two 3-pointers. He narrowly missed his first career double-double with 19 points and nine assists, but ISU point guard Monte Morris really wanted to talk about his defense.

“It made me feel real good,” said Morris, who tormented Georgia State’s high-scoring guard Ryann Harrow from end-to-end Monday as the No. 14 Cyclones surged to an 81-58 win before 13,913 fans at Hilton Coliseum. “A lot of guards that I’ve played against — I’ve played against  fast, I’ve been seeing strong all year and last year, so Harrow, he’s a great player. Herky-jerky. Like I said, every guard I play, it ain’t like I’ve never seen it before. I’ve seen it all, so I’m ready to guard anybody.”

Morris held Harrow to 12 points on 6 of 22 field goal shooting and helped force him into five turnovers while giving up zero of his own.

“He was awesome,” said Cyclone coach Fred Hoiberg, who implored his players to pick up the pace at halftime and they responded by extending an 11-0 run that turned a 31-29 edge into a long-lasting double-digit cushion. “You look at that line 19 (points), nine assists, five rebounds, zero turnovers and a nice block there at the end. He makes us go. He’s the guy that’s out in front, both offensively and defensively. I’m pretty confident the guy he’s guarding is going to have — at least if he has a big night, it’s going to be tough. He’s going to be worn down at the end of it.”

ISU’s quickened gait clearly drained the Panthers (1-1), who shot 39 percent from the field and committed 15 turnovers. R.J. Hunter led Georgia State with 21 points, but he needed 20 shots to do it.

“It was all about pace,” said Hoiberg, whose team improved to 2-0. “I know I use that word all the time, but it truly is, it was the key to tonight’s game. When we got it out and threw ahead and got the floor flattened out we got pretty much what we wanted.”

And reserves such as Daniel Edozie and Sherron Dorsey-Walker provided bright spots, as well, as Hoiberg whittled his rotation to seven players in advance of the return of Abdel Nader and Matt Thomas from suspensions.

“We’ll get them integrated back into what we’re doing, playing with that first group some,” Hoiberg said of his suspended players. “But we took a step froward this week, especially on the defensive end. To hold that team to 39 percent shooting, and scoring on some tough, tough shots, I really thought our defense is heading in the right direction.”

“Anytime you play a team that plays different and unorthodox — and they’re 40 minutes of zone, whether it’s the 1-3-1, whether it’s the match-up, whether they get out and three-quarters court pressure you,” Hoiberg said. “It takes a lot of time to prepare for that. I was really nervous.”

Morris wasn’t. He’d been tabbed as a defensive stopper several times as a freshman and typically delivered. Now he’s being asked to score the ball more and Monday he showed why Hoiberg’s confident he can shoulder the heavy and broad-ranging load.

“Coach wanted us to pick up the pace a little bit and that was our key in the halftime,” Morris said. “He wanted us to come out with better pace and we did in the second half. Got good shots and got the ball moving.”

Niang notched his second career double-double with 11 points and 10 rebounds, but shot just 3 of 12 from the floor. “Georges didn’t have a typical Georges night,” Hoiberg said. … Dejean-Jones tied a career-high with seven assists. “We’re just looking to continue to get better every game,” he said. … ISU had 23 assists on 29 made baskets.