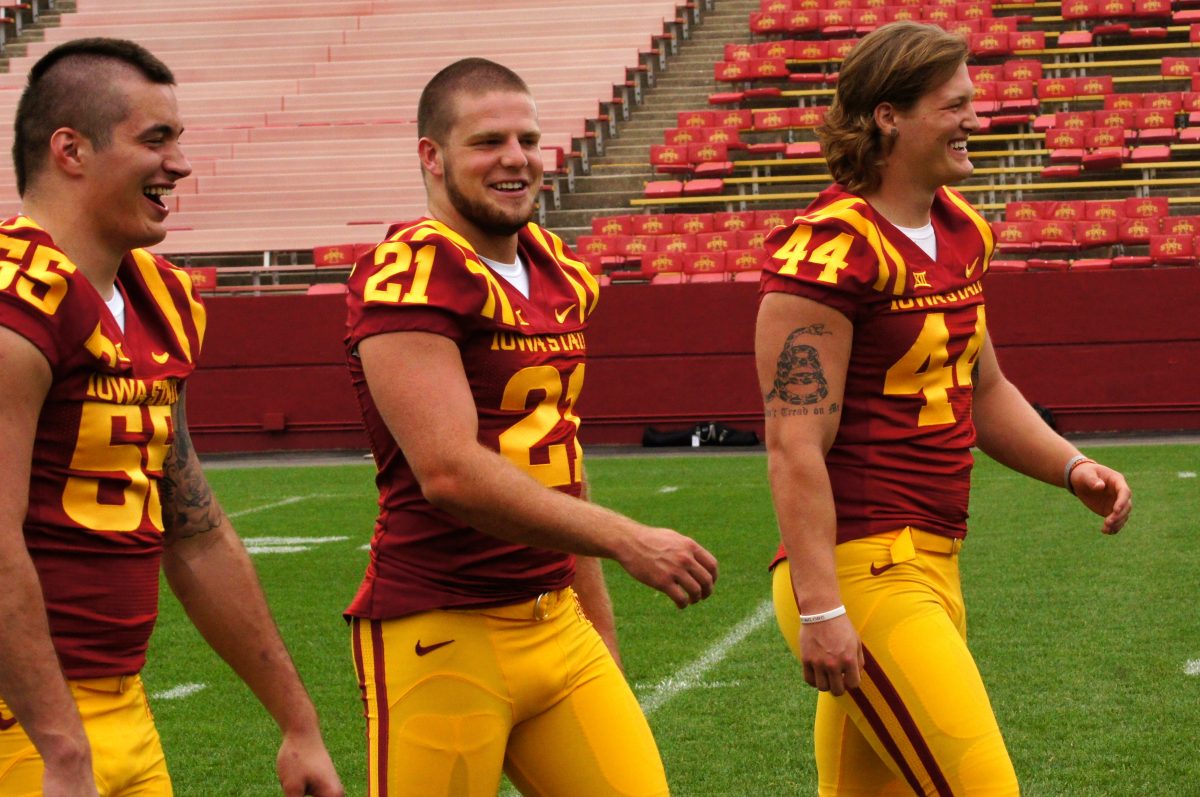 Brother Luke — a Cyclone up-and-comer at the position — listened.

The past apparently can predict the present.

At least that’s the case for the Knotts.

“Right now I feel better than I ever have this deep into camp,” said Luke Knott, who was cleared to resume football activities in the spring. “After the first week, usually you’re pretty sore from going at it for a full week now. I know last year I was very sore at this point. Where I am now is head and shouldered above where I was.”

That remains to be seen, but recording 45 tackles in half of his first season’s a robust starting point.

“I’ve felt good about Luke,” defensive coordinator and linebackers coach Wally Burnham said of Knott, who’s battling senior Jevohn Miller for the top WILL spot. “He’s done well. No side effects from the injury. He’s come out and he’s a smart guy, just like his older brother. I don’t like saying that because he doesn’t like to hear it — and I don’t ever say it in the meetings. He wants to be his own man and I don’t blame him.”

Luke Knott impressed coaches last season with his nose for the ball.

He’s still undersized at 219 pounds, but what Burnham often refers to as “want-to” goes a long way in the journey from untested, then injured freshman to fully-healed potentially budding star.

“I feel it’s kind of a mindset, too,” Knott said of making the ‘better than ever’ prediction come true. “You can’t let things like this set you back. If anything it should give you even more motivation.”

BRING THE NOISE: Note to opposing Big 12 fans: If you want to get under ISU senior center Tom Farniok’s skin, good luck.

“The more hostile the better,” Farniok said of how he likes a road game to be. “I thrive on that. I guess I’m wired a little bit differently. I wish that every game people would be cussing at me and throwing stuff at me.”

FROM CHAOS TO TRANQUILITY: The bizarre nature of the Cyclones’ 2013 schedule was well-documented. There were two open dates within the first three weeks of the season. Next came the first Thursday game. And on it went. This season’s slate is arranged in a more orderly manner, with open weeks spaced well apart — and no unusually quick turnarounds.

“We like it,” ISU Coach Paul Rhoads said. “Last year’s — and this is a family press conference — last year’s stunk. It was awful. We didn’t play a normal Saturday to Saturday game until mid-October.”

REFINED RULE: The NCAA has tweaked the targeting rule significantly this season. The key changes: In games in which replay is being used, officials can go to the monitor to determine if targeting was indeed the right call. If it wasn’t, an ejected player would gain a reprieve. Also, if there’s not an added personal foul call, the accompanying 15-yard penalty would also be reversed.

“It is a welcome change,” Rhoads said. “You’re not going to get everything right the first time. I think it was something that was plainly obvious that it needed changed and good from them to step in and change it.”

Also, in games where replay is not being utilized, officials will be able to conduct a halftime review of targeting calls, though it’s optional. If a call is deemed to be erroneous, an ejected player would be reinstated for the second half.

LOOK ‘MA: A MULLET!: Cyclone quarterback Grant Rohach declared his mom loathed the mustache he began nursing along in spring practice. So he doubled down, adding a mullet to the equation. Her reaction? “I went home at the end of July and she was just mortified when she saw the mullet,” said Rohach, who is battling for the No. 1 spot with Sam Richardson and Joel Lanning. So what’s a good son to do? Become more mortifying. “I don’t think I’m being a good kid if I’m not getting my mom mad. She’s gotten used to it now and I think she’ll be able to live with it for the season.”