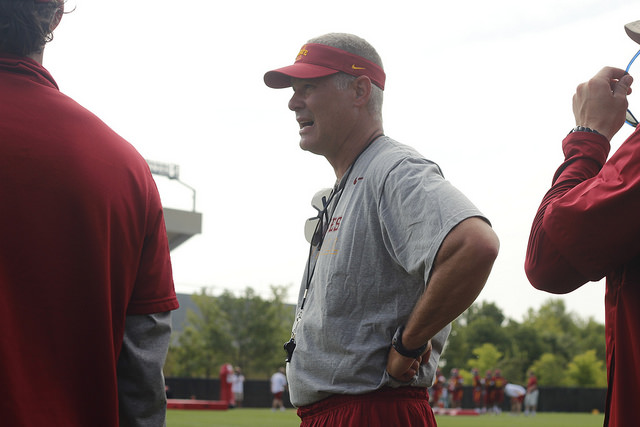 AMES — Iowa State will host its first scrimmage of fall camp on Saturday and surprisingly, Paul Rhoads won’t be obsessing over the play of his quarterbacks. It is the three-man competition at MIKE linebacker that has Iowa State’s head coach intrigued.

“I am anxious to see the MIKE linebackers play,” Rhoads said after Friday’s practice. “There are three of them repping.”

Those men are Alton Meeks, Kane Seeley and Jordan Harris. Meeks, a redshirt freshman, currently sits atop Iowa State’s depth chart with Seeley and Harris rounding out the second and third-strings. Harris, a junior-college transfer who arrived on campus this spring, is an especially interesting Cyclone.

“Jordan has improved from where he was in the spring,” Rhoads said. “He was a better linebacker on day one of fall practice than he was on day 15 of spring ball. I talked to him yesterday about how meetings have helped with that. I am anxious to see him scrimmage. There is no question that he is behind the others guys from a learning curve situation but when the lights go on, the kid plays football. Tomorrow we are going to turn the lights on and I want to see all of those guys play football.”

Expect all three players to see the field in 2014. In what order, is the big question this early in camp.

The same can be said about the current situation at WILL linebacker. Luke Knott and Jevohn Miller are currently listed as co-starters on the depth chart.

“Overall, we have depth at the linebacker position,” Rhoads said. “Jevohn has played. Luke has played. Levi Peters has skills and Brian Mills is going to be a special teams player for us on multiple units so that’s a group that you will see more than one guy playing on game day at that position.”

Cornerback competition: Sophomore Nigel Tribune has one cornerback spot locked up for the 2014 opener. What about the other side? Secondary coach Maurice Linguist said that as of now, junior Sam Richardson has a slight edge over Kenneth Lynn.

“Sam has the most productive I’d say through the first week,” Linguist said. “He has out performed the other two corners who are fighting for that spot right now but the depth chart is fluid. The depth chart is moving.”

Regarding Lynn and senior Matthew Thomas…

“It doesn’t mean that Matt Thomas or Ken Lynn have been performing poorly,” Linguist said. “I’d just say that Sam is a guy who I am so proud of right now. He is invested in his own play. If you could pop your head in here on a Monday night or a Sunday night or a Tuesday night, you’d see a dark room and you’d see Sam Richardson over there watching tape. Now you are seeing all of that investment that he put in over the summer come into fruition on the field.”

Aggressive: T.J. Mutcherson believes that Iowa State’s secondary will play a more aggressive style in 2014 in comparison to last year.

“Last year we played a lot of loose man and I’m not sure the reason why but I know this year we are going to probably be more aggressive because you can see that we have a lot of speed back there and we have the guys who can get in guys’ face and challenge them and stop the route and things like that,” Mutcherson said. “I think we will be more aggressive this year than last year.”