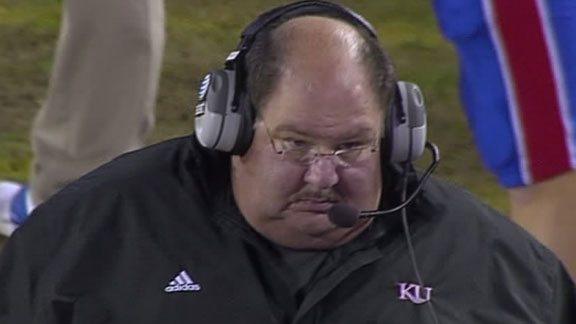 Mark Mangino, whose offensive wizardry at multiple schools has been a catalyst for winning, is Iowa State’s new offensive coordinator.

Mangino was assistant head coach (in charge of TEs) and recruiting coordinator at Youngstown State, his alma mater, last season. The head coach at YSU is Eric Wolford, one of Mangino’s former players.

“I am beyond thrilled to welcome Coach Mangino to the Cyclone football family,” Rhoads said. “He has an imaginative offensive mind, an ability to play to his players’ strengths, a track record of winning and a tremendous familiarity with the Big 12 Conference. In terms of calling plays and executing a game plan, he is top shelf. He has learned from a ‘Who’s Who’ of college coaches, effectively led his own championship program and is respected throughout the coaching ranks.”

Mangino’s Big 12 experience is vast having served as the head coach at Kansas (2002-09) and as an assistant coach / coordinator at Oklahoma (1999-01) and Kansas State (1991-98). Mangino spent three years away from the sidelines after departing KU as his wife successfully battled breast cancer.

Mangino’s playbook is varied and innovative. To open a bowl game one year, Mangino flanked out both of his tackles next to the wide receivers. His offensive approach is wide-open, aggressive, and most importantly, effective. The last four offenses Mangino led averaged more than 400 yards per game.

His Jayhawk teams were 50-48 overall, played in four bowls and won three. He is the only coach in KU history to win bowls in consecutive seasons (2007 and 2008). Kansas was ranked a school-record 19 straight weeks between 2007-08, set home attendance records five years in a row and produced the top three total offenses in school history.

The magical season of 2007 was the pinnacle. Kansas climbed as high as No. 2 in the national polls, shared the Big 12 North Division title, recorded a school-record 12 wins and won 11 games in a row (including an upset of fifth-ranked Virginia Tech in the Orange Bowl). Led by quarterback Todd Reesing, Kansas was second nationally in scoring (42.8), eighth in total offense (479.8) and scored 64 touchdowns versus only 46 punts in ‘07.

Mangino was showered with coaching honors in 2007, including 14 national coach-of the-year awards. Among those were the Bear Bryant, Eddie Robinson and Woody Hayes Coach of the Year awards as well as recognition from the Associated Press, the American Football Coaches Association, the Walter Camp Foundation, The Sporting News and ESPN.

While at Kansas, Mangino developed a “Character First” program to educate players on key life skills. He also contributed to the Lawrence community through Big Brothers Big Sisters, the Boys and Girls Club and Habitat for Humanity.

Mangino got his collegiate coaching start at Youngstown State (1985-86) working for Jim Tressel. After three years at Geneva College (1987-89) coordinating the offense and coaching the offensive line, Mangino was hired by Bill Snyder at Kansas State.

The Wildcats won at least nine games and played in a bowl game his final six seasons in Manhattan. A loss in the 1998 Big 12 Championship game is all that kept KSU from the national championship game. Mangino helped tutor quarterback Michael Bishop, the Heisman Trophy runner-up, that season.

Mangino then moved to Oklahoma and joined Bob Stoops’ first staff in 1999, working alongside Sooner offensive coordinator Mike Leach. Mangino was promoted to OC the following year and Oklahoma went 13-0, beat Florida State in the Orange Bowl and was crowned national champion. Josh Heupel, another Heisman Trophy runner-up, was Mangino’s quarterback that year.

The 2000 Sooners were seventh nationally in scoring (39.0) and 13th in passing (294.7) and Mangino won the Frank Broyles Award as the nation’s top assistant coach. In his three years at OU, the Sooners scored at least 40 points in a game 14 times. Mangino also coached 2003 Heisman Trophy recipient Jason White at OU as well as Outland Trophy winner Jamal Brown. OU’s record in his two seasons as OC was 24-2.

The native of New Castle, Pa., is a 1987 graduate of Youngstown State. He and his wife, Mary Jane, have a daughter (Samantha) a son (Tommy) and four grandchildren. 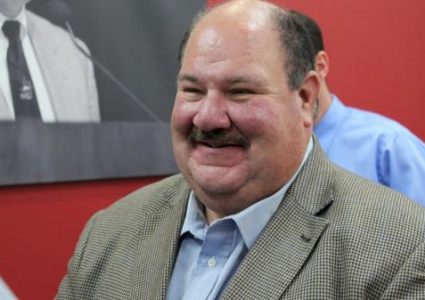