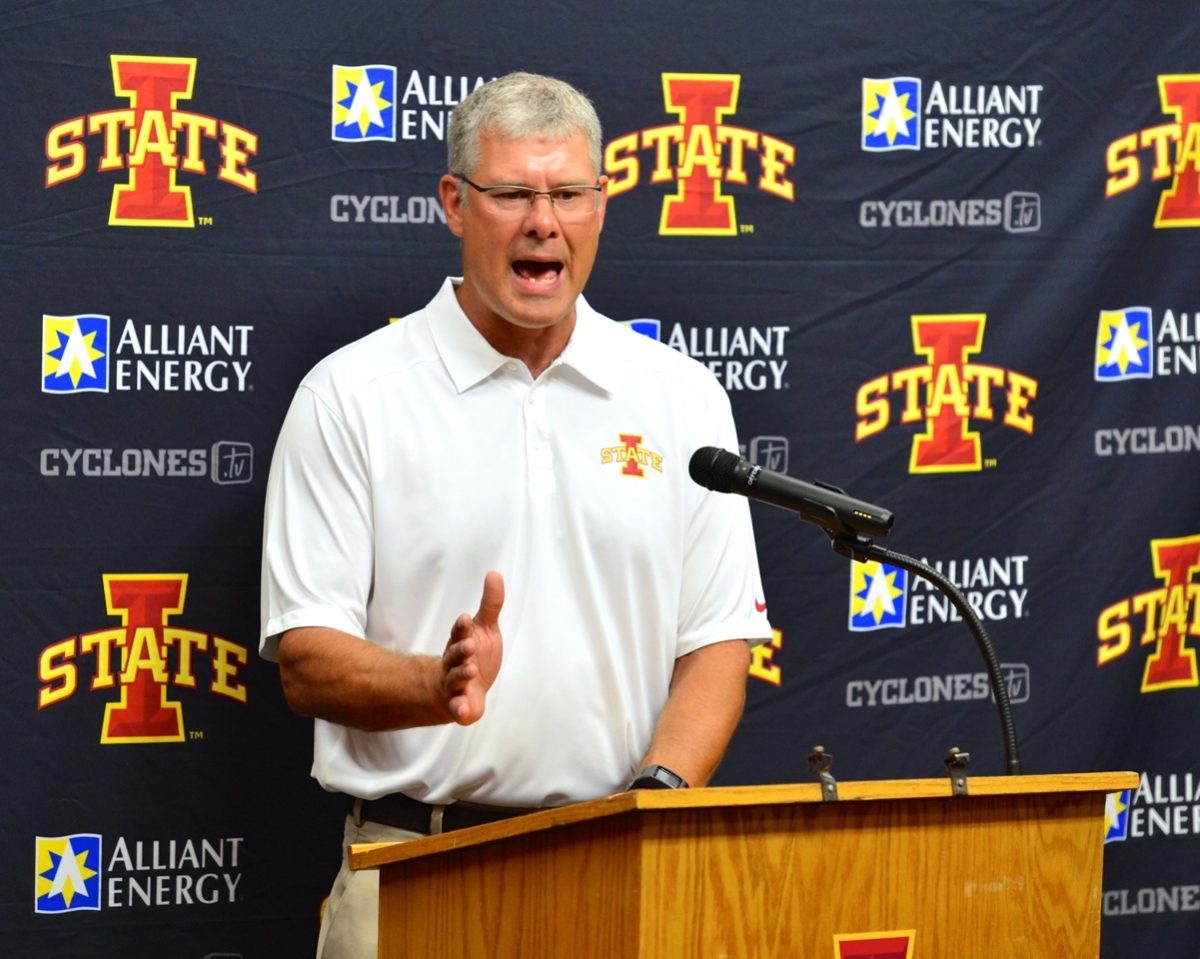 I won’t lie though. I did not foresee a press release showing up in my inbox at 3 o’clock on Sunday afternoon coming – especially after the Cyclones ended the rocky season on a two-game winning streak.

Not that wins over non-bowl teams Kansas and West Virginia should have changed anything. I figured that the changes would be announced sooner rather than later, but not less than 24 hours after Saturday’s 52-44 triple-overtime win at West Virginia.

So what exactly does this tell us?

Heading into Saturday, Rhoads probably had his mind made up. Changes, significant changes, were coming on offense and frankly, it is hard to blame him. Take a look at the first five years of the Paul Rhoads era in Ames. Here are where the Cyclones ended in all five seasons in total offense, followed by scoring offense:

Tom Herman, who is now heading up Ohio State’s offense, led Iowa State in year’s one through three. Courtney Messingham, who had worked with tight ends and wide receivers during those first three seasons, was the OC in 2012 and 2013.

When you look at the numbers during those two campaigns, clearly production on the offensive side of the football was not improving and this ain’t the Big Ten either folks. In the Big 12, you have to score points, which is something that the Cyclones clearly struggled to do this season.

Think about that scoring offense stat: Iowa State has never finished better than 85th in that category over the last five years. It is somewhat amazing that Rhoads has led Iowa State to three bowl games in five years after you investigate how vanilla the offense has actually been.

Rhoads needs to infuse fresh blood into his coaching staff. When Herman bolted for Ohio State, Rhoads promoted from within and obviously, it did not work. Iowa State’s head coach has noted time and time again that he is a big fan of the spread so I don’t envision that ever going away. But there are different variations of it out there and in my opinion; completely handing over the keys to a proven outsider might not be a bad thing. But if you are wanting Rhoads to go straight Paul Johnson and bring the triple-option to Ames, you could not be more off.

However, as the offense proved last night, there is some impressive young talent on Iowa State’s roster. That offensive line should (key word should) be a lot better in 2014.

Also note that this is a Big 12 job that pays Big 12 money. While I don’t see a guy like Dana Holgerson ever coming to Ames, the current state of Iowa State’s football program shouldn’t ever settle for anybody either.

Obviously, it is incredibly early in this “search,” but here are a few names that immediately came to my head upon hearing Sunday’s big news.

Some names to consider…

Before starting up Iowa Western’s football program in 2008, Strohmeier was the head coach at North Iowa Area C.C. from 2005-2007. He was the offensive coordinator, quarterbacks coach and assistant head coach at Truman State (D-2) in 2004 and held the same position at Concordia from 1998-2003.

From an experience standpoint, Strohmeier might fall short but his track record is impressive. The third-ranked Reivers are currently scoring 47.8 points per game.

Strohmeier, the 2012 ACCFCA Coach of the Year, is known for developing quarterbacks and could be a weapon in the junior college recruiting ranks as well.

Mark Mangino, former Kansas head coach, assistant coach at Youngstown State – Any man who can lead Kansas to a BCS game should at least get a look in my opinion, Manginio, the AP’s Coach of the Year in 2007, was the offensive coordinator at Oklahoma in 2000, the same year that the Sooners won their latest national title. Mangino was given the Frank Broyles Award that season, which is given annually to college football’s top assistant coach. After a rocky ending to his career at KU, Mangino went back to his roots where he is now the recruiting coordinator at Youngstown State. Perhaps he is ready to return to the big time college football scene?

Tony Franklin, California offensive coordinator – Franklin, who coached with Paul Rhoads at Auburn in 2007-08, just wrapped up a tough first season at a Cal program that is currently rebuilding. Franklin was the OC at Louisiana Tech from 2010-12. In 2012, Franklin’s offense was ranked first nationally in scoring offense and total offense. It is notable that Franklin was rumored to be in the running for this job two years ago when Courtney Messingham was promoted.

Dave Christensen, former Wyoming head coach – Gary Pinkel’s longtime offensive coordinator at Missouri is now looking for employment. Christensen’s tenure with Wyoming ended on Sunday after accumulating a 27-34 record in five seasons at Wyoming. Regardless of his record as a head coach, there is no question that Christensen knows offense. Take 2007 as an example, when he led Missouri to a No. 4 ranking in passing offense, while the Tigers were ranked sixth in scoring offense and eighth in total offense. This is one of the men who put Missouri on the big time college football map. Want a guy who Rhoads can simply hand the offense to and say, “Have fun?” Christensen knows the Big 12 too. This would be a home run hire in my opinion.

Todd Sturdy or Chris Klenakis – As I have already noted, I am all for Rhoads hiring from outside of the current program, but both of these men have proven to be great offensive minds in the past.

I’ll start with Sturdy, who joined Rhoads’ staff as the wide receivers coach and passing game coordinators in 2012. Sturdy came to Iowa State via Washington State, where he led the Cougars’ offense for four seasons. In 2011, Washington State ended the year ranked ninth nationally in passing offense, 33rd in total offense and 45th in scoring offense.

Then there is Klenakis, who is known as one of the innovators of the “Pistol” offense. Klenakis, who served as Iowa State’s offensive line coach in 2013, came to Iowa State from Arkansas, where he held the same position. The year 2008 was a banner year for Klenakis and Nevada’s (his previous job to Arkansas) offense. Klenakis became the first coordinator in NCAA history to lead a team to school records in total offense, rushing yards and rushing touchdowns.

Sage Rosenfels, former Iowa State/NFL quarterback – This would be a popular fan choice that Rhoads could make and frankly, I understand why. While he doesn’t have any coaching experience, Rosenfels would be a splash hire and knowing Sage (as I do), he would not be afraid to take a firm hold of the offense. Rosenfels would bring instant credibility to the position as he was a quarterback in the NFL from 2001 to 2012. As Fred Hoiberg has proven, that could be quite the coup on the recruiting trail. Obviously, he could coach and develop quarterbacks too. Rosenfels has sense retired from the NFL, lives in Omaha and can be seen/heard on numerous sports programs across America as an NFL expert. Rosenfels still comes to Ames often to support Iowa State teams and is a guy who should at the very least get a phone call and interview. 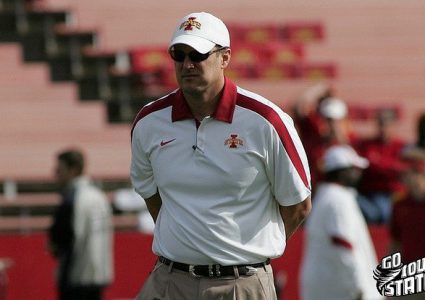