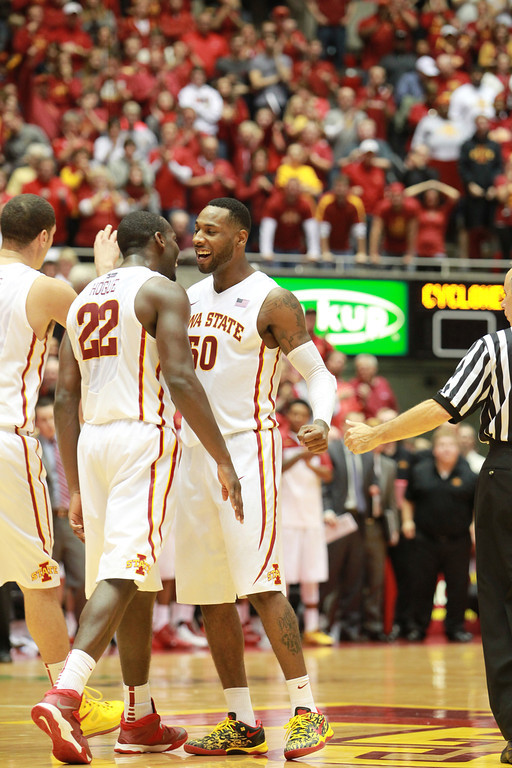 AMES — In 1964, United States Supreme Court Justice Potter Stewart famously said, “I know it when I see it,” when attempting to define obscenity. In a peculiar way, that phrase can also be used when trying to recognize a top-25 basketball team in the month of November.

After watching Iowa State defeat No. 7 Michigan, win at BYU, beat its first two opponents by 30-plus and throttle UMKC by a 110-51 final on Monday night, I have now seen it, and I know it. And as both of America’s major polls confirmed on Monday, the latest version of Cyclone basketball is clearly a top-25 basketball team.

Showing up, taking care of business and doing exactly what it is supposed to do against an inferior opponent is what a top-25 team should do.

“You can’t have off days and that includes practice,” Fred Hoiberg said after the game. “I give our guys a lot of work every day and very easily could have had a letdown after that Michigan game at one of the toughest environments to play in out in Provo. I really thought that we let that one go after we beat Michigan. We came back with a couple of great days of practice. That carries over to the games when you have that type of preparation. That’s one thing that I have really enjoyed about this group. They come to work every day. It is fun when you have a group of guys like that.”

After a sluggish start, Hoiberg’s 17th-ranked Cyclones went on a 34-4 run (that included a 27-0 run) to end the first half while improving to 5-0 on the season. The 59-point win was the sixth largest in Iowa State history.

*** DeAndre Kane led Iowa State with 20 points in the victory (in only 20 minutes). Kane is now averaging 16.4 points per game to go along with 8.4 rebounds.

*** Backup guard Sherron Dorsey-Walker played the best game of his young career. The redshirt freshman scored a career-high 17 points on 6-of-7 shooting from the field.

*** Every Cyclone on Iowa State’s roster scored a in this game.

“The great thing about it is when you have those guys over on the bench who are playing the majority of the minutes cheering as hard as they were for those guys who don’t get a lot of opportunity out there,” Hoiberg said.

“Tyler, they were jumping up and down over there when he scored his first jump shot,” Hoiberg said. “That’s fun to see. You know you’ve got good chemistry and guys like each other when you see that happen.”

*** All five of Iowa State’s starters played 20 minutes or less.

The Cyclones will host Auburn next Monday night at 6 p.m. in the Big 12-SEC Challenge. The Tigers are currently 3-1 on the season with wins over Nicholls State, Jacksonville State and Murray State with a loss to Northwestern State. Auburn will travel to Tennessee State on Tuesday night.