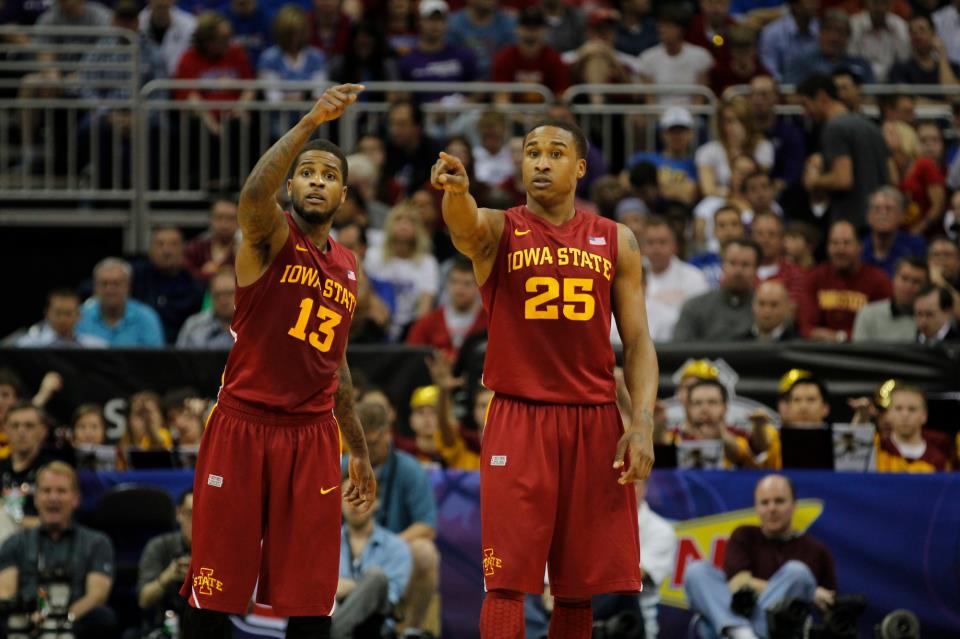 As most of you know by now, Fred Hoiberg threw one heck of a party last night. In The Mayor’s basement, the Cyclones, Iowa State’s coaching staff and media members gathered to take in the 2013 NCAA Tournament Selection Show.

Twenty minutes before it began, everyone in the house was as loose as a goose. Little kids were shooting hoops. I’m pretty sure the PS3 was fired up with a little NBA Live action going on. Matt Abdelmassih owned a grad assistant in ping-pong. The pleasant aroma of Hickory Park was unavoidable.

But things got tense in a hurry.

Once the selection show began, Colorado State and former Iowa State head coach Larry Eustachny was one of the first teams to appear on CBS. Nobody wanted anything to do with that one. It was a matchup that wouldn’t have been good for anybody, other than television of course. Those guys are always looking for a good storyline and rightfully so.

Then there was Creighton and Greg McDermott…

When the Bluejays appeared as a seven seed in Philadelphia, I seriously would have bet my mortgage on Iowa State being the opponent.

Now I fully realize that many of you out there would have loved this. The disdain that many of you have for McDermott is borderline ridiculous in my opinion but hey, you all are fanatics. You have a right to feel however you choose.

But you have to realize how many people in that room had to be feeling at that time. I can’t imagine that T.J. Otzelberger, a guy who McDermott gave a first opportunity to, wanted to see that matchup. From grad assistants to players McDermott recruited to one of the man’s best friends, Jeff Rutter – that would not have been fun. Not at all.

*** TRAVEL to the NCAA Tournament with Cylcone Fanatic ***

The Cyclones get Notre Dame and you know what? I like it. I like it because if you think about this Iowa State basketball team (and last year’s too for that matter), it’s a roster that tends to play better when the lights are brightest. Think back to all of those disappointing non-conference games over the last two years.

*** I’m happy to announce that for the first time in the history of our company, Cyclone Fanatic will be on location covering Iowa State in the NCAA Tournament. Traveling to cover events is hard for a company as small as ours (that doesn’t charge for subscriptions) to do so I want to take some time to thank our good friends at Channel Seed for stepping up to the plate.

Visit them at Channel.com today. We’ll touch on this more tomorrow in the Channel Seed Podcast.

*** I still don’t know a ton about Notre Dame but based off of the research I have done, their bigs do concern me a bit. Mike Brey is a top-of-the-line coach who will do everything he can to bleed the clock and suck the life out of Iowa State’s high-octane offense. The best way to do that is by getting Melvin Ejim and Georges Niang in early foul trouble. We’ve seen this time and time again in 2013 and my full expectations are that the Fighting Irish will take things to the paint early and often on Friday night.

*** I liked this tweet that ABC 5 sports director Dave Zawilinski fired off last night regarding the Cyclones, the Big 12 Tournament and Iowa State’s first round draw.

“They won’t admit but IMO the larger Sprint Center was a reason for poor shooting. Dayton’s arena much more intimate.”

Let’s hope that "Z" is onto something.

*** Here’s a reminder to tune into tonight’s Cyclone Fanatic Radio Show as Brent Blum, Tron Smith and I will preview the 2013 NCAA Tournament. We’ll talk Notre Dame and be joined by guests as well to break down Iowa State’s draw in the Big Dance. Tune in from 7-8 on KXNO. We’ll broadcast live from BenchWarmers in Ankeny and as always, I’ll have the podcast posted here at Cyclone Fanatic later on tonight.