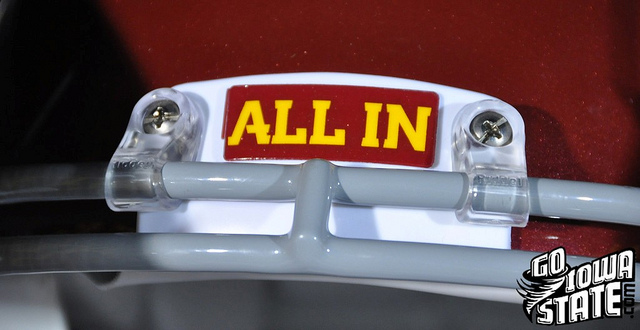 Yours truly went 4-2 a week ago and took advantage by a 2-4 week from Adam Carper. I’m currently sitting on a three-game lead that is due to implode this weekend. Here are the picks.

Iowa @ Indiana – One of the easier picks of the weekend IMO. Hoosiers win.

Texas @ Texas Tech (-7) – There’s always a chance that Texas is just going to wake up one of these weeks (watch it be against the Clones next weekend) but I have a feeling that the Red Raiders are about to take away the manhood of the Longhorns. This one might get ugly folks. Tech.

Oklahoma State @ Kansas State (-9) – A scary game for Kansas State. It really is. However, give me Old Man Snyder and the Cats.

Iowa @ Indiana – Iowa should win this game but they lack leadership and an identity on either side of the ball.  Like the Hoosiers to give the Hawkeyes loss No. 5.

Oklahoma State @ Kansas State (-9) – Talk about a game with two different coaching philosophies.  It is truly remarkable to see what Bill Snyder has accomplished this year.  Have to go with the old man at home.

Oklahoma (-10.5) @ Iowa State – Clones come out early and play inspired football for their leader Knott but the Sooners will come to Ames with something to prove and pull away in the second half.  Sooners.

Iowa @ Indiana – The hawks pick up a win.

Alabama (-9.5) @ LSU – Alabama has been on cruise control. There’s no better team in football.

Texas @ Texas Tech (-7) – I’m rooting for less viewership on the Longhorn Network for the rest of the season.  Tech covers.

Oklahoma State @ Kansas State (-9) – Are the Wildcats due for a loss?  If they are, this could be the week. I’m calling for Okie State to cover, despite the Wildcats demanding wins against almost everyone they’ve played

Oklahoma (-10.5) @ Iowa State – This QB situation is like reading the same book over and over, hoping it ends differently. Jantz did have a great game, but I don’t see him making some of those throws against other defenses in the Big 12. I hope I’m wrong. Talk about the emotional toll these QB’s have gone through the past few years. I hate to go against the Clones but Oklahoma is Oklahoma.  Sooners cover

Iowa @ Indiana – Indiana can score points and play tough at home. I simply don’t think Iowa can keep up. No Weisman and missing lineman doesn’t let Ferentz run that offense and slow things down like he’d like to do.  Indiana 31-23

Alabama (-9.5) @LSU – Tiger Stadium is where dreams go to die. At least that’s what Les Miles tells us.  I don’t think they win but I think they give Bama all they got and cover. 17-13 Bama

Texas @Texas Tech (-7) – Texas has one of the softest defenses I’ve seen. It’s not like they are playing with busted pieces.  They have legit talent on that defense and are playing horrible.  I just don’t see them going into Lubbock and being tough enough to win or cover. Tech 41-30

TCU @West Virginia (-7) – Two tough losses to think about on a bye. I think Holgerson is a good coach and with 2 weeks to prepare for TCU they will put up some points. WV wins 51-38

Oklahoma State@ Kansas State (-9) – I don’t know why but I got a feeling that Gundy will put together a great game plan against K-State and they will be able to keep up with the Wildcats. In the end, all they can do is cover because K-State just doesn’t make mistakes.  Kstate 38-35

Oklahoma (-10.5) @ Iowa State – First time all year I’ve picked against Iowa State. I just question our offenses ability to score points against a good defense.  I think the defense plays inspired and tough for Jake Knott but they can only do so much. Oklahoma 27-10

Iowa @ Indiana – Indiana is technically a one point favorite. This is the first time they have been favored in a conference game since 2007. Ouch. I have a hard time thinking Iowa can lose to an Indiana team that lost at home to Ball State. Iowa clearly has the better defense and they carry the torch here. Iowa 24 Indiana 21.

Alabama (-9.5) @ LSU – We haven’t seen this Alabama team face any semblance of adversity. LSU will throw a few punches and make this thing interesting. Alabama 24 LSU 17.

Oklahoma State @ Kansas State (-9) – Mike Gundy’s club is sneaking in the shadows like a drifter in a back alley. They win this game and they vault right back into the Big 12 title conversation. Cats better be nervous. This one is tight. K-State 24 Oklahoma State 23.

Oklahoma (-10.5) @ Iowa State – The #1 song the last time Iowa State beat OU in Ames was The Drifters, "Save the Last dance for me." Catchy little tune I must say, I bet Bill Snyder slow-danced to that thing with the lasses back in his day. Oklahoma has a filthy amount of talent on defense. Frightening really. Iowa State needs to hit a few big plays and win the turnover battle. Oklahoma 27 Iowa State 20.

Oklahoma (-10.5) @ Iowa State – For me, this comes down to the ISU defense. Are they inspired by Jake Knott or are they deflated. I don’t have high hopes for huge offensive output but I think the defense plays well enough to cover in a loss. OU 35-27

Iowa @ Indiana – Honestly, I have no idea. The Hoosiers gave scares to Ohio State and Michigan State in Bloomington and Iowa has played worse than any of their fans could’ve feared. It will be tight but I’ll give the nod to Iowa.

Alabama (-9.5) @ LSU – Going solely off what "Bama Bob" said the other day on the radio I’ll take LSU to at least cover. Bama knows and follows the SEC and Alabama as close as anyone and was awfully scared for the Tide headed to Baton Rouge.

Texas @ Texas Tech (-7) – I was firmly on the Red Raider bandwagon…then they got thumped in Manhattan. While I may be off their bandwagon I am far from confident in the Longhorns. Tech wins and covers.

TCU @ West Virginia (-7) – Seven seems like a lot of points to give up while we all just wait for the return of the Mountaineer offense that we saw in the first half of the season. TCU has played solidly through tough situations this year but I’ll do the dumb thing and stick with WVU to cover.

Oklahoma State @ Kansas State (-9) – I’m perpetually picking the Wildcats until they fail to cover. Their offense has been sooooo good the past few weeks.

Oklahoma (-10.5) @ Iowa State – I think we’re in for a low scoring tilt. Everyone will make a big deal of Oklahoma coming in "mad" when it probably doesn’t matter a whole lot. In reality Oklahoma may be much better than their ranking when you consider their two losses are to Kansas State and Notre Dame. Their offense has been inconsistent but their defense has been very, very good. The Sooners are holding opponents to a passer rating of 96.4, the 5th best in the country. Can the ISU offense find ways to move the ball against that pass defense or their pretty decent rushing defense? Can the Cyclones stop the run? Make Landry Jones make throws that once seemed automatic for him? I’m not sure that Iowa State will beat them for the first time in Ames since 1960 but I think the game will be low scoring enough that it stays within ten. Cyclones cover.

Iowa @ Indiana – Iowa has shown me nothing to convince me it can win this game. But every time the seat gets a little hot under Ferentz’s fanny, he finds a way to win enough to make a meaningless bowl. That’s why I’ll take the Hawks.

Alabama (-9.5) @ LSU – The Tigers don’t lose at night in Death Valley. At least not until this week. Bama stays unbeaten but I like LSU to cover.

TCU @ West Virginia (-7) – WVU has to respond. Don’t they? The Mountaineers aren’t as good as they looked early in the season, but there’s no way they’re as bad as they’ve shown recently. West Virginia covers.

Oklahoma State @ Kansas State (-9) – I think this will be a tough game for Kansas State. The Cowboys hang but 9 isn’t enough. Wildcats cover.

Oklahoma (-10.5) @ Iowa State – I like Iowa State to put up a good fight at home. ISU has never beaten OU at Jack Trice Stadium. That streak won’t come to an end. ISU hangs for 3 quarters but OU covers by two touchdowns.

Iowa @ Indiana – The Hawkeyes are down right now, but not out. It is typical of Kirk Ferentz football teams that they bounce back after losses similar to last weeks against Northwestern. Hawks win 31-26.

Alabama (-9.5) @ LSU – This game will be similar to last year a defensive battle. AJ McCarron left the game early last week against Miss St, so that is concerning for the Crimson Tide. Also, this game being in Death Valley is obviously a big a advantage, I like LSU to cover.

Texas @ Texas Tech (-7) – Beside Kansas State, I think Red Raiders are one of the biggest surprises in the Big XII this season. Beside last week they have been playing very good football, I like them getting back home this weekend and bouncing back from last week.  This Texas defense will continue to struggle, Tech covers the 7.

TCU @ West Virginia (-7) – This game is very intriguing, just because both teams have struggled as of late. TCU has a lot of growing pains that are occurring right now, however so does West Virginia. I think the Mountaineer offense and Geno Smith get back on track and cover.

Oklahoma State @ Kansas State (-9) – This is an easy one, nothing can stop the Wildcats right now. They cool off the recently hot Cowboys.

Oklahoma (-10.5) @ Iowa State – Cyclones face their toughest challenge of the season so far.  For the simple fact that Iowa state doesn’t match up well with this Oklahoma as they did against Kansas St.  Also, the loss of Jake Knott is pivotal. However, Jack Trice will be a sellout and it will be loud as hell. The Cyclones cover at home in a closer game than experts think.