Get ready for a crazy couple of weeks in the basketball recruiting universe. That might not necessarily be the case for Iowa State though.

Here’s the skinny. With Matt Thomas and Monte Morris already committed to Fred Hoiberg’s class of 2013, Iowa State now has four open scholarships to give. It doesn’t matter if you’re a diehard hoops recruiting junkie or a casual observer. Know this: Iowa State needs bigs in a bad way. And that’s going to be the recruiting focus during the month of July and beyond for the 2013 recruiting class.

LINK: For a preview of the upcoming AAU weekend from our friends at Recruit Lists, CLICK HERE.

TWO TO WATCH: A couple of guys who I’d strongly suggest to keep an eye on over the coming weeks…

Kyle Washington, a 6-foot-9, 195-pound prospect out of Connecticut, unofficially visited Iowa State last year. Name a school and this power forward probably has an offer from it, as you can see by viewing his Rivals.com profile here.

Another 2013 prospect that Iowa State has and will continue to spend a lot of time on is Zach Hanson, 6-foot-9, 240-pounds out of Pierre, (S.D.). Like Washington, Hanson’s offer list is impressive.

Iowa State appears to be a legitimate contender to land both of these prospects but at the same time, the competition is heavy. At the end of the day, they are both probably long shots but what do we always say about hoops recruiting here at CF? Anything can happen.

JUCO TIME: Don’t be surprised if Iowa State looks to add a junior college wing or post to its 2013 class. Indian Hills C.C. forward Dustin Hogue (originally from Yonkers, N.Y.) could end up being that man.

Hogue, a 6-foot-6 wing, averaged 11 points and five rebounds per game as a freshman in Ottumwa.

Don’t be surprised if some other names from the junior college ranks pop up over the next few months as well.

— I’d honestly be shocked if Iowa State uses up all four scholarships in its 2013 recruiting class. Nailing down a couple of high school bigs like Washington and Hanson would be ideal, but the thought of Iowa State going high school, JUCO and a transfer (to get to three more and a class of five) wouldn’t surprise me at all.

— Not only does Iowa State need some size, but this roster needs to add a big time rebounder going forward. When you look at the roster two to three years down the road, that presence is something that it lacks. Sure – Georges Niang and Percy Gibson are talented individuals, but neither are what I’d call physical specimens. A Calvin Godfrey type of player would be a solid addition.

— Speaking of Godfrey, Rodney Bullock is another name I have heard Iowa State be associated with. Bullock is a 6-foot-6, 210 bulldozer out of Hampton, (Vir.) who rminds me a lot of Godfrey as far as style of play goes.

— Let’s talk guards for a minute. Monte Morris is a point guard. Matt Thomas is a two but could possibly play the three. I can only imagine that the need for bigs and depth at guard has ended Iowa State’s run at Terrance Samuels?

In addition to that thought, I’ve read a lot about Romulus, (Mich.) point guard E.C. Matthews over the last few days around the web. Iowa State has a long history with Romulus. That’s where Will Clyburn played high school ball. Remember Dominique Buckley?

Matthews is a high-rated player with a nice offer list but I’m just not sure how well he fits in this class while factoring needs, etc. His Romulus teammate Wesley Clark can be inserted into this exact same conversation as well. We’ll see…

— And last but certainly not least, there’s 2014 to think about. We already know about Kansas City’s Clayton Custer. One can only imagine that Iowa State will sign another point guard in that class. A guy to keep an eye on isKevin Zabofrom? If you guessed the Brewster Academy in Wolfeboro, (N.H.) you’re correct. 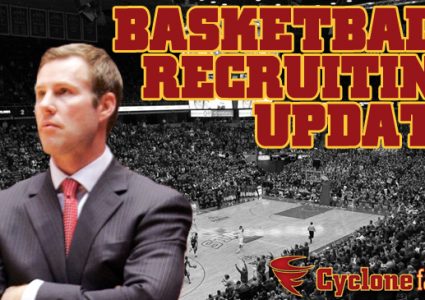