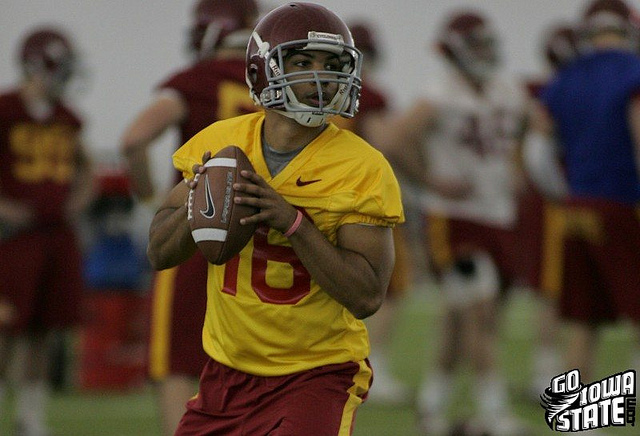 Football junkies rejoice! Iowa State’s spring football workouts will begin on Tuesday and stories surrounding the 2012 Cyclones are not hard to find. Here’s my top five storylines to follow during spring ball 2012.

Todd Sturdy and Troy Douglas will make their coaching debuts for the program this spring at positions that will be critical in the fall.

Meanwhile, Courtney Messingham will begin to implement any changes that he might bring to Iowa State as the program’s new offensive coordinator.

Sturdy, who comes to Iowa State after being Washington State’s offensive coordinator a season ago, will take over as the program’s wide receivers coach as well as being the passing game coordinator. We’ll get more into wide receiver play later in this article, but it’s a position that needs to improve drastically for Iowa State’s offense to be able to keep up with others in the Big 12.

Douglas will begin his 25th season as a college coach by handling Iowa State’s secondary that will be forced to replace the likes of Leonard Johnson (cornerback) and Ter’Ran Benton (strong safety). Like with the wide receivers, I’ll elaborate more on the secondary later in this piece.

Is this not always a big storyline at Iowa State? Defensive line is the toughest position to recruit in all of college football but the good news is that Iowa State appears to have quite a bit of young talent stockpiled that should get its shot to turn some heads over the next few weeks.

After recording five tackles during his true freshman campaign, will sophomore (at 6-foot-7, 262-pounds) David Irving lock up a starting spot at defensive end? He’s an early favorite.

Senior defensive end Roosevelt Maggitt missed last season due to a knee injury. He’ll be back for 2012 with Devin Lemke (RS Fr.), Rony Nelson (Sr.), Willie Scott (Jr.), Nick Kron (RS Fr.) and Cory Morrissey (So.) all in the mix as well.

There are fewer questions at defensive tackle, as two veterans in Jake McDonough and Cleyon Laing, should lead the way. However, several young guns will be breathing down their necks. Namely, there’s one of the 2011 recruiting classes most highly-touted prospects, Quenton Pompey (6-foot-3, 303-pounds). Is Pompey ready?

Sophomore Brandon Jensen, senior Henry Simon and junior Walter Woods III will all be in the mix as well.

The starting lineup for the defensive line isn’t a giant concern for Iowa State, but developing depth is. Being able to go nine, 10 or even 11 deep across the board is a big luxury. Will the Cyclones be able to do that in the fall and if so, what will that rotation look like?

We’ll learn more about some of the young guys in the coming weeks.

3 — HOLES IN THE SECONDARY

Losing a lockdown cornerback is never fun. Troy Douglas, Wally Burnham and Paul Rhoads will have their work cut out for them in replacing Leonard Johnson, who recorded 72 tackles as a senior.

Jeremy Reeves recorded 70 tackles with two interceptions as a junior and will be back for his senior year but the race to replace Johnson is wide open. Look for Johnson’s backup from last season, junior Jansen Watson (recorded 12 tackles as a sophomore), to be an early front-runner with redshirt freshmen Kenneth Lynn and Sam Richardson to be in the conversation as well.

Ter’Ran Benton intercepted more passes than any other Cyclone last season and he’ll need to be replaced at strong safety. That starting spot looks to be wide open as spring ball approaches with Durrell Givens (a senior who had 31 tackles last year), Jared Brackens (had seven tackles as a true freshman in 2011) and junior college transfer T.J. Mutcherson all competing for the job.

Three redshirt freshmen, Ja’Quarius Daniels, Tad Ecby and Quenton Bundrage, all have the chance to see legitimate playing time during their rookies seasons. In fact, Rhoads nearly played Daniels and Bundrage as true freshmen a year ago.

The trio brings size to Iowa State’s offense, as all three players are taller than 6-0 (Ecby is 6-foot, Daniels is 6-foot-3, Bundrage is 6-foot-2) and weight 184 pounds or more.

They won’t be handed playing time though. Senior Josh Lenz is a lock to start. Albert Gary was Iowa State’s top wide receiver during Jared Barnett’s run as Iowa State’s quarterback and towards the end of 2011, we all saw just how good Jarvis West could potentially be.

The wildcard in this group is none other than former quarterback Jerome Tiller, who will make his debut at wide receiver this spring. Tiller, a 6-foot-3, 204 pound senior is listed a third string but his history at quarterback makes him an intriguing prospect for a gadget play here or there.

When Paul Rhoads pulled Jared Barnett for Steele Jantz early in the 2011 Pinstripe Bowl, you knew it was only a matter of time.

Jantz and Barnett are both listed at No. 1 on Iowa State’s depth chart heading into the spring but how long will it stay that way? Will one man outright win the job this spring or will this competition carry on into the fall?

What about redshirt freshman Sam Richardson? Is it possible that the 6-foot-2, 204 pound rookie will play the role of Jared Barnett from a spring ago. The talent is there and from the sound of things, he understands the offense.

I fully believe that entering spring drills, this is a three-man quarterback race.

Iowa State’s spring game is schedule for April 14 at 2 p.m. As we always do, CycloneFanatic.com will cover spring football up until that point.