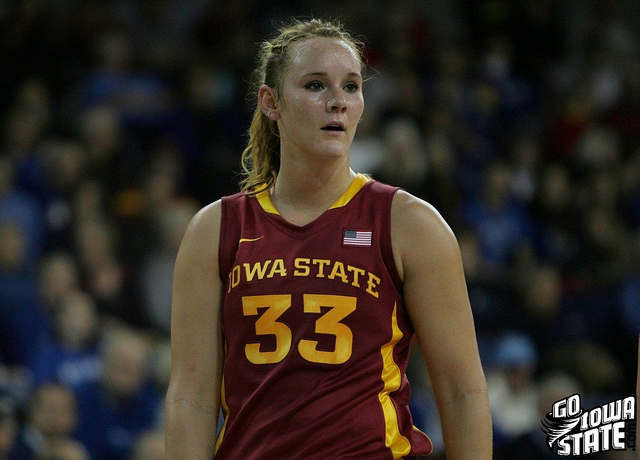 Chelsea Poppens led the Cyclones, scoring 23 points, grabbing nine rebounds and was credited with two assists.  It was the junior who carried Iowa State in the lane as the Cyclones outscored the Wildcats 36-20 in the paint. Nikki Moody and Lauren Mansfield added 15 points each.

Kansas State, which hit on 5-of-12 3-point shots in the first half, went 0-of-8 beyond the arc in the second half.  The Cyclones were 1-for-4 on threes in the first half but 5-of-10 in the second half. Iowa State tallied 21 points off 13 KSU turnovers. The Wildcats could manage only six points off the Cyclones’ 18 turnovers. Iowa State outshot Kansas State from the field and is now 11-0 in those games this season.

Iowa State came out strong on defense to start the second stanza and the Wildcat’s 36-27 nine-point halftime lead began to disintegrate. The Cyclones outscored Kansas State 14-8 over the first nine minutes of the second half. When Moody hit a 3-pointer with 10:37 to go, the game was tied, 44-44.

Iowa State then began working the ball in to Poppens who scored three straight buckets, the last at the 7:27 mark to give the Cyclones a 50-46 lead.  Mansfield followed with a pair of 3-pointers to expand the Cyclone lead to 56-48 with 5:18 to go. Kansas State did not get closer than five points the rest of the game.

In the first half, Tasha Dickey’s 3-pointer gave Kansas State a 17-10 first-half lead with 11:39 left. Iowa State answered with its own run. Manfield’s shot after drive to the bucket was good and the Cyclones had taken 20-19 lead with 9:03 left in the first half.

Iowa State then went into a scoring drought with Hallie Christofferson’s basket at the 6:24 mark the Cyclones’ only field goal over more than seven minutes until Moody scored with 1:12 left in the half. A JuliAnne Chisholm 3-pointer for Kansas State closed out the initial half as the Wildcats led 36-27 at the break.