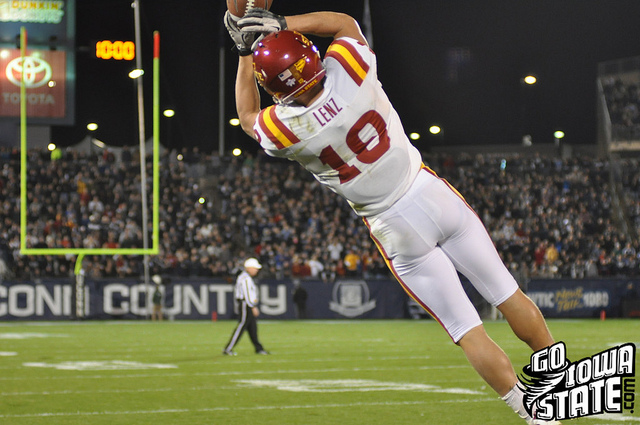 The year 2011 was full of fantastic individual plays made by student-athletes at Iowa State.

It’s now time to vote on our first Clonie Award, the 2011 Play of the Year. Here are videos of the nominees, followed by the actual poll where you can vote below.

JANTZ TO LENZ VS. NORTHERN IOWA(2:43 mark of video)

Sept. 3, 2011 – Without this famous play, Iowa State wouldn’t be going to the Pinstripe Bowl later on this month. Steele Jantz and Josh Lenz helped saved the season in game one.

Nov. 21, 2010 – Controversial? Yes. Did the Cyclones still win? You bet. Jamie Vanderbeken gave us all a moment that we’ll never forget.

Sept. 16, 2011 – From the same game as Lenz’s catch, Darius Reynolds showed off his vertical leap in this touchdown reception.

Nov. 18, 2011 – After a Jake Knott tip, Benton picked off this pass and Iowa State went on to beat the second-ranked Cowboys by a 37-31 final in two overtimes.