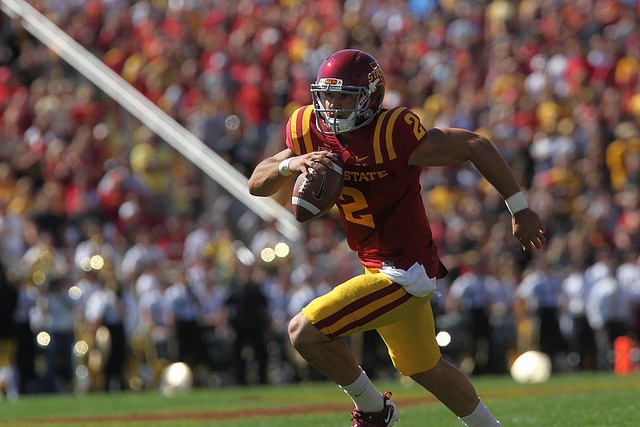 The Cyclone Nation saw some legendary performances by Iowa State athletes in 2011.

Your Clonie Award nominees for Individual Game of the Year are…

— In the second game of his career, Iowa State quarterback Steele Jantz threw for 279 yards and four touchdowns in a 44-41 triple-overtime win over the rival Iowa Hawkeyes on Sept. 10.

— The redshirt freshman who was Iowa State’s third string quarterback in the spring won his first three games the program’s starting quarterback. The third one was a 37-31 double-overtime victory over second-ranked Oklahoma State, where the freshman threw for 376 yards and three touchdowns, while recording 460 yards of total offense on the night. That number, 460, ranks third in all-time in Iowa State football history.

— Congrats to Scott Christopherson, the first Cyclone to be nominated for the same Clonie Award for two different performances in 2011. Christopherson dropped 30 points in a 75-72 road victory at Iowa while going 7-for-12 from 3-point range along the way.

— Iowa State overcame a cold shooting night by Kelsey Bolte to knock off 25th ranked Texas on national television. Sophomore Chelsea Poppens had a lot to do with that. Poppens recorded a then career-high 23 points along with her 13 rebounds in the Cyclone women’s basketball’s biggest win of 2011.