I spoke with Olu Ashaolu on the phone last night. Ashaolu, a 6-foot-7 senior to be is leaving Louisiana Tech with one season to play. Think Jake Anderson here…Ashaolu already has his degree and would not have to sit out a year after transferring.

Ashaolu told me that while he won’t make a decision until towards the end of May, Iowa State will for sure get a visit. Ashaolu is also showing heavy interest in Oregon and San Diego State.

During his junior season, Ashaolu averaged 14.2 points and 9.2 rebounds per game. Should he eventually commit to Iowa State, one would expect Ashaolu to contend for a starting spot from the day he steps on campus.

One of Iowa State’s top targets in the class of 2012, Nkereuwm Okoro, snagged another high-major offer last week. This one hailed from College Station and the Big 12 Conference, as Texas A&M is now in the mix.

“It made me feel good to see another school come forward and give me an opportunity,” Okoro told CycloneFanatic.com.

Okoro, a 6-foot-4, 200-pound shooting guard has recently named Iowa State as his favorite, along with having serious interest in Arizona, Pittsburgh, Seton Hall and now Texas A&M. Of all those schools, Pitt is the only one that still hasn’t offered.

From an Iowa State standpoint, Okoro’s recruitment may head a different direction in a hurry. That’s due to the pending hiring of Matt Abdelmassih on Iowa State’s coaching staff. Like Okoro, Abdelmassih is a New York City native and has proven to be a shark in those recruiting waters over the last year. Abdelmassih was critical in Iowa State landing another New York City prospect, Tavon Sledge in the 2010 class.

Last week, CycloneFanatic.com reported that Abdelmassih would officially be named as an assistant coach in the near future. He was the Director of Player Development last season. This hasn’t happened yet (we still anticipate an announcement shortly), but Abdelmassih can still legally recruit as Iowa State is currently short two assistants, with the departures of Bobby Lutz and Elwyn McRoy over the last month.

“He’s (Abdelmassih) great,” Okoro said. “He’s a real genuine guy just like Hoiberg and the rest of that staff. They are recruiting me really hard.”

Okoro said that along with Abdelmassih, Fred Hoiberg has been personally recruiting him the hardest.

“I will probably wait out the summer but I should be close to making a decision before my senior year,” Okoro said.

Some 2013 NYC prospects to watch 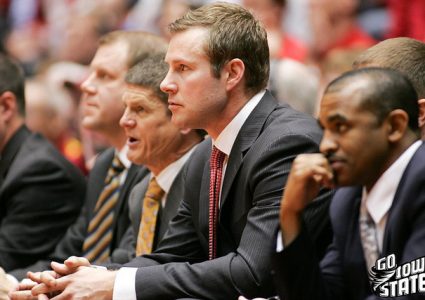