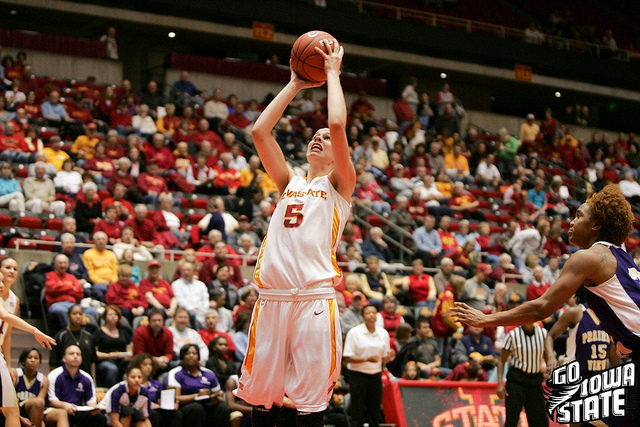 Women’s basketball coverage at CycloneFanatic.com is brought to you by our good friends at Wilson Toyota.

AMES – Give an Iowa State shooter an inch and expect to pay. The Cyclones are deadly, especially at Hilton Coliseum.

The victory pushes Iowa State’s win streak to three games in the rough and tumble Big 12.

“We scored some points, made the three,” Iowa State coach Bill Fennelly said. “When we make the three, we got a chance to win.”

In a game that featured so many fouls Rain Man could barely keep up, the Cyclones pulled away from behind the arc. Iowa State made six 3-pointers in a five-minute span in the second half to turn the tussle into a rout.

Kelsey Bolte – who finished 4-for-4 from long range – started and ended the decisive run with 3-pointers. In between, Anna Prins, Hallie Christofferson and Kelsey Harris all drilled threes.

“We made a couple of threes in transition,” Fennelly said. “They went to a zone, we ran a couple of plays and hit some threes.

“It seems like they all came at really good times for our team.”

After surging to a 65-41 advantage, the Iowa State defense took care of the rest. Oklahoma State shot just 34 percent from the field, and made only 3-of-17 3-point attempts.

Iowa State is holding opponents to 53.3 points per game this season.

Kelsey Bolte doesn’t care about postseason awards – she just wants to win. When she plays like she did on Wednesday, the outcome is rarely in doubt.

Bolte scored 20 points on 6-of-9 shooting, including a 4-for-4 performance from 3-point range. The senior also snagged nine rebounds.

“I told her after the game that she’s had a great career and I hope I don’t play her again.”

Despite drawing top-notch defenders across the league, Bolte is putting up huge stats in conference play. In seven games, she is averaging 21.7 points and six rebounds. Bolte has reached the 20-point mark six times already.

Chassidy Cole doesn’t score much, but her emergence has been vital to the Iowa State offense. Since moving into a starting role, Cole’s solidified the lineup and allowed the Cyclones to find some rhythm in their substitution patterns.

“Everyone did a great job tonight of helping me out, helping the Cyclones out,” Bolte said.

–       The 19 rebounds Chelsea Poppens grabbed against Missouri are the most by a Cyclone since Angie Welle snared 23 against Colorado on Feb. 9, 2002.

–       Iowa State gave away 20 free tickets to the game via Twitter on Wednesday afternoon. The tickets were gone within five minutes.

–       There were 52 fouls called in Wednesday’s game. Iowa State took advantage at the free-throw line by making 24-of-35 attempts.

–       Oklahoma State’s Vicky McIntyre is proving to be a keeper. The freshman is the Cowgirls leading scorer this season and tallied 24 points against Iowa State.

Iowa State will put its three-game winning streak on the line this Saturday at Oklahoma. The Sooners pose a tough challenge for the Cyclones as they enter the game 16-5 overall and 6-2 in the Big 12 after losing to Baylor, 92-70, on Wednesday night.

Aaryn Ellenberg (17.1) and Whitney Hand (14.9) are also averaging double figures for the Sooners.