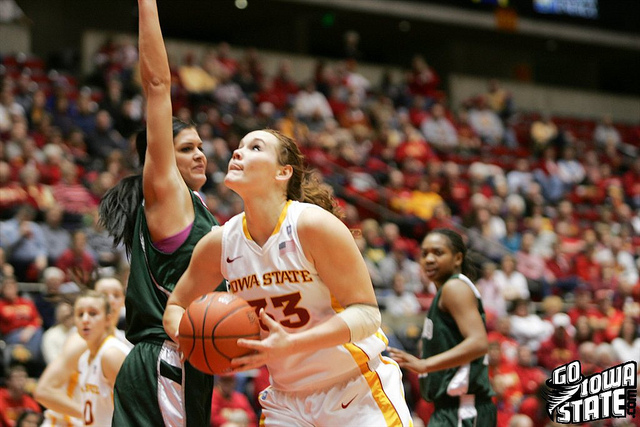 Iowa State women’s basketball coverage at CycloneFanatic.com is brought to you by our good friends at Wilson Toyota of Ames.

AMES – Iowa State broke the 3-point record in only one minute and 38 seconds, but it took overtime to accomplish something entirely more important – a conference victory.

The Cyclones toppled Texas in a 66-57 white-knuckle win that was as heart pounding as it was critical. Not only did it start to solidify a spot in the NCAA Tournament for Iowa State, it broke a tie with the Longhorns and Texas Tech and moved the Cyclones (19-8, 7-6) into fifth place in the Big 12 standings.

“We are in the hunt,” Iowa State coach Bill Fennelly said. “We’re surviving, that’s kind of how we are here. It was big.”

After a back-and-forth second half, No. 25 Iowa State wasted no time snatching control in the extra period. Anna Prins scored consecutive hoops inside to give the Cyclones a 58-54 lead. Chelsea Poppens – who finished with a career-high 23 points – found room under the hoop for a layup and a 60-54 advantage.

“Those three possessions (in overtime) were as good as (Poppens and Prins) have played together in a long time, as far as one’s cutting, one’s filling,” Fennelly said. “In overtime, when you get out to a lead, it’s big.”

Senior Kelsey Bolte finished the flurry with a 3-pointer from the right wing to push the game out of reach at 63-54.

“I feel like when we get our confidence going, everybody gets really excited,” point guard Lauren Mansfield said. “We just make plays.”

Bolte’s carried the load often this season, but on Monday it was her teammates who did the heavy lifting. The senior went 3-for-16 from the field in 45 minutes, notching eight points and nine rebounds. No worries though as the rest of the team chipped in enough to get the job done.

“That’s something we’ve been searching for forever,” Fennelly said. “It’s a basketball team. It doesn’t say Kelsey Bolte and others on our jerseys.”

Chelsea Poppens is a rugby player in basketball shoes. It’s not an Iowa State women’s basketball game if she doesn’t bleed from diving on the court.

Thanks to Poppens’ tenacious effort on Monday, Iowa State scored arguably its biggest win of the season. The sophomore scored a career-high 23 points and grabbed 11 rebounds – seven of which came on the offensive end.

“Poppens was aggressive from the start,” Fennelly said. “That’s the way she plays. As hard as she plays, it’s hard to keep her away from the basket when she wants too.

“Certainly, she was the best player in the game tonight. I don’t think anyone would argue with that.”

From the get-go, it was evident Poppens came to play. She outworked and outmuscled Texas (17-10, 6-7) around the hoop all night. Not only that, Poppens was efficient. She scored her 23 points on 7-of-9 shooting, made 9-of-12 free throws and drew a couple of big charges. Poppens – along with Anna Prins – helped Iowa State outscore the Longhorns 34-18 in the paint.

“It just seemed like if any of us (post players) got some ground on them, it was like we could do whatever we want,” Poppens said.

It always helps when you’re the strongest player on the court like Poppens was on Monday.

The Cyclones broke the NCAA record for consecutive games with a 3-pointer in fitting fashion. Sharpshooter Kelsey Bolte swished a trey from the left wing 1:38 into the game to give the Iowa State a 3-pointer in 511-straight games.

The streak started more than 16 years ago on Feb. 19, 1995 against Colorado. Canisius held the record until they went 0-for-12 behind the arc in a loss to Iona last Friday.

“It’s kind of one of those corky little records,” Fennelly said. “I think what it does is it’s a record that took a long time to achieve. There are a lot of people who made a lot of shots.”

And now for a bit of obvious news: Hilton Coliseum is a special place. Iowa State’s 66-57 victory over Texas was its 300th all-time at the historic arena. The Cyclones are now 300-141 inside Hilton.

Under Bill Fennelly, Iowa State has never lost more than five home games in one season. The 16-year coach is 215-35 inside his home building. This season, the Cyclones are 15-1 at Hilton.

A portion of that sparkling record can be credited to Iowa State’s fanatical fans. On Monday, 9,506 of those faithful were decked out in white to cheer the Cyclones on to victory.

“We all loved the white-out,” Chelsea Poppens said. “It felt lot brighter in there.”

–       Iowa State teamed up with Wilson Scion of Ames to provide more than 6,000 white t-shirts for Monday’s game. Coach Bill Fennelly even got in on the act by wearing white dress shoes from Moorman Clothier.

Iowa State has proved it can take care of business at home. Now, it’s time to take that mentality on the road. The Cyclones will try to break their three-game road-losing streak on Saturday when they travel to Kansas State (18-7, 8-4).

Earlier this season, Iowa State topped the Wildcats 61-53 at Hilton Coliseum. Kelsey Bolte paced the Cyclones in the win with 25 points. Lauren Mansfield did her part by sealing the game at the free-throw line.

Kansas State is led by Brittany Chambers. The guard averages 16.0 points per game after dropping 32 on Nebraska in a 69-64 win on Saturday night. Jalana Childs (13.5) and Taelor Kerr (10.1) also average in double figures for the Wildcats. 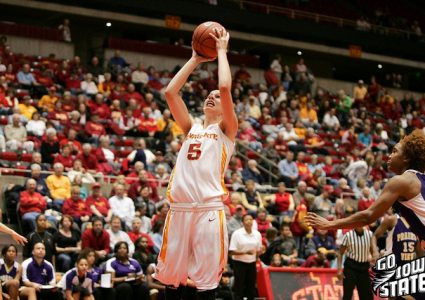 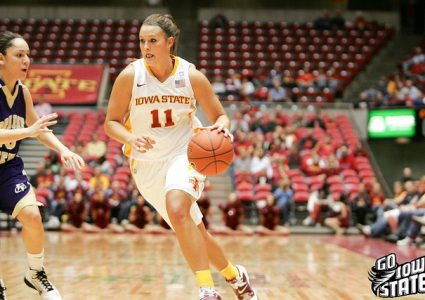