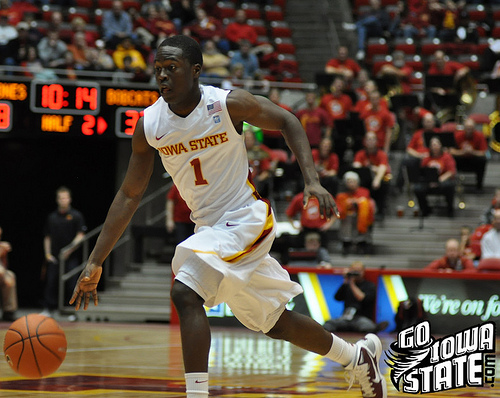 Chalk it up to finals week or the lackluster opponent, but Iowa State slept walked through the first half.

“In the second half, we just buckled down,” Bubu Palo said. “The crowd gave us a little bit of energy. We started to get some buckets and that led to our defense.”

A close game – the Cyclones led just 28-27 at halftime – turned into a laugher thanks to a stifling defense a barrage of 3-pointers. At one point, the Cyclones drilled five-straight treys. Meanwhile, the defense smothered Dartmouth as Iowa State went on a 26-5 run to start the half.

“The big difference is we wanted to extend our pressure (in the second half),” Iowa State coach Fred Hoiberg said. “With our numbers, we don’t press as much as we’d like too, but we had to change something up. The fact that Diante (Garrett) got up full court, Melvin (Ejim) was up there picking up, I really thought that was the difference. We extended out, tried to plug the passing lanes, that led to some turnovers. That got us out and running.”

The offense started to find its rhythm when Bubu Palo sliced through the Big Green defense for a nifty layup. A bevy of 3-pointers followed. On consecutive possessions, Diante Garrett, Scott Christopherson, Palo (two of them) and Jamie Vanderbeken all hit threes to push the Cyclones’ advantage to 54-32.

From there, the only thing in doubt was the final score.

When Diante Garrett is on, he can light up a scoreboard with ease. On Sunday afternoon, the senior did just that. Using a sweet stroke from the outside, Garrett tallied a game-high 27 points on 10-of-16 shooting.

“I just looked for my spots where I could score,” Garrett said. “It was flowing through our offense and I was picking it apart, trying to find where I was going to get my baskets from and create for my teammates.”

Garrett is quietly marching his way up a couple of impressive lists. With 27 points against Dartmouth, he became the 28th player in Iowa State history to top 1,000 points in his career, and now has 1,017.

“Garrett works his tail off everyday,” Hoiberg said. “He’s the Energizer Bunny for us. He never gets tired.”

He certainly didn’t on Sunday. The senior spent the week long layoff between games working on his shot. After tweaking a couple of things, Garrett showed a smooth delivery while scoring eight of Iowa State’s first 11 points of the game.

“I think the one guy this week that really benefited (from the break) was Diante,” Hoiberg said. “He was able to get in the gym and get up extra shots, work on his technique.”

Iowa State knows it can expect defense and energy from Bubu Palo. If the freshman hits shots like he did on Sunday, he just might start seeing more playing time.

“I just try to come in and bring energy, get some hustle plays,” Palo said. “If the opportunity shows to knock down some open jump shots, I’ll try to knock them down.”

Palo’s 3-pointer in the first half pushed Iowa State ahead, 20-19. Later, the Ames native started a 26-6 run with a nifty layup. Palo added two more 3-pointers and finished the game with 11 points.

“He’s been reluctant to shoot the ball. He’s got to step up and shoot it. If it goes in, obviously that’s great. But still, to spread the defense out, he’s got to rise up and shoot that shot. I thought he really did a good job.”

–          Scott Christopherson’s 3-pointer early in the second half moved his streak of consecutive games with a 3-pointer to 15.

–          Melvin Ejim drew the loudest cheers of the game when he raced down court and rejected a Dartmouth breakaway layup into the Iowa State bench.

Iowa State is back in action on Tuesday when it hosts Chicago State at 7 p.m. The Cougars will enter the game with a 3-10 record after getting routed by Hawaii, 86-57, Friday night. Carl Montgomery leads Chicago State with 12.6 points per game.

After Tuesday’s tilt with the Cougars, Iowa State doesn’t play again until Dec. 30 at Virginia.