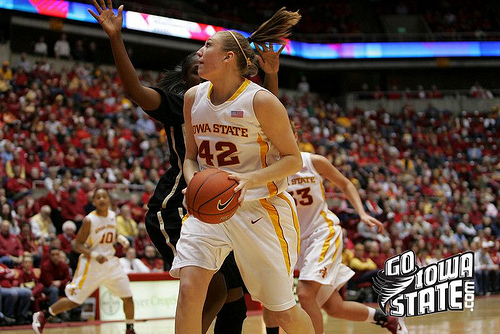 AMES – Iowa State’s defense is as salty as an Iowa winter.

The Cyclones (7-2) continue to dominate opponents on the defensive end of the court. On Sunday, Iowa State put on a clinic against Columbia (0-9), rolling to a 73-27 victory.

No, the Lions aren’t Baylor, but the Cyclones’ performance was impressive nonetheless. Anytime a team can hold a Division I foe to 27 points and 9-of-56 shooting, it deserves kudos.

“There were a lot of people saying nasty things about our team Thursday night,” Iowa State coach Bill Fennelly said about the loss to Iowa.

“We beat a team (today) that we should beat. We played well and we did the things we needed to do regardless of the opponent.”

After Sunday’s performance, Iowa State is giving up just 49.3 points per game. Opponents are shooting 31 percent on the season against Iowa State – 26 percent from behind the arc.

“I understand the level of competition (today) wasn’t anywhere near where we’ve been facing, but we defended solid,” Fennelly said.

There’s an understatement. Future opponents could get headaches after looking at the game tape. Normally, the Cyclones use a stingy man-to-man defense to frustrate teams. For most of the game against Columbia, Iowa State used its length to its advantage in a 2-3 zone.

Imagine a two-hour bus ride when you’re sick to your stomach from losing to Iowa and suffering from the flu. That’s what Chelsea Poppens dealt with on Thursday.

“It was bad, especially on the bus,” Poppens said.

Poppens is back and feeling better. She proved that with her effort on a possession late in the first half. The sophomore dove for a loose ball, found an open teammate and made a layup inside to give Iowa State a 30-12 lead.

In other words, typical Poppens. The Aplington native finished the game with eight points, nine rebounds, and one cut knee after diving for another ball in the second half.

“We have to get her going somehow because she does have that energy,” Fennelly said. “She’s on the floor, she rebounds. Tonight, she had a good game.”

To say Poppens wasn’t feeling well during the matchup with Iowa is an understatement. The illness put a serious dent in her normal all-out style. Poppens tried to gut it out, but she wasn’t the same player.

The flu bug went through the Cyclones this last week. Assistant coach Jodi Steyer didn’t even make the trip to Iowa City on Thursday. It got so bad, Iowa State didn’t have enough players or coaches to practice on Friday.

“I always have that mindset to rebound,” Poppens said. “I felt that today especially.”

After struggling for much of the season, the Iowa State post players brought their A-game on Sunday. Besides Poppens’ effort, Anna Prins,Amanda Zimmerman and Hallie Christofferson turned in strong performances.

Prins paced the Cyclones’ offense with 14 points. Christofferson chipped in 13 and Zimmerman nine.

“I think throughout the game, we started to build our confidence more,” Christofferson said. “That was something we needed to do after Thursday’s game.”

Iowa State fans are a brave bunch. Despite wind chills in negative degrees, the official attendance for Sunday’s game was 9,302. Now, there probably wasn’t that many people inside Hilton, but the ones who were there did their best to help the Cyclones.

After a tough loss to Iowa on Thursday, the home crowd was just what Iowa State needed. The victory over Columbia pushed the Cyclones’ record to an incredible 96-3 against non-conference opponents during Bill Fennelly’s tenure.

“It was an amazingly bigger crowd than I thought would be here,” Fennelly said.

–          The Cyclones broke 70 points for the first time this season. Fennelly joked it was cause for celebration.

The Cyclones will get a much needed break before their next game against Cal State Northridge on Dec. 20. The Matadors are 0-10 on the season with a date against South Dakota State on Dec. 18 before traveling to Ames.