"It was a great effort by our guys," Hoiberg said. "The guys did a really good job early of setting the tone and getting out and running the floor. I’m very pleased with the effort that we got in this first game."

Seven Cyclones finished the game with double figures, with Scott Christopherson leading the way with 18.

– Calvin Godfrey was Iowa State’s most pleasant surprise coming out of the win. Yes, he was playing against a bunch of D-3 players but still, Godfrey’s motor never quit running. The true freshman forward recorded a double-double with 12 points and 13 rebounds.

"He was a spark off of the bench," Hoiberg said.

– Much to my surprise, true freshman forward Eric McKnight did end up playing in the win. After Thrusday’s practice, Hoiberg told members of the media that he didn’t plan on playing the 6-foot-9 freshman after clearing up what he called a “little issue.” McKnight played 11 minutes and recorded three rebounds in the the exhibition.

– Iowa State scored 48 points in the paint compared to Dubuque’s 10. Take that stat lightly though. Dubuque’s tallest player was 6-foot-6.

Next Friday at 7 p.m., Northern Arizona will come to town in what will officially tip off the Fred Hoiberg era in Ames. 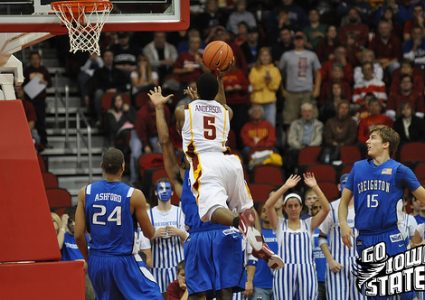